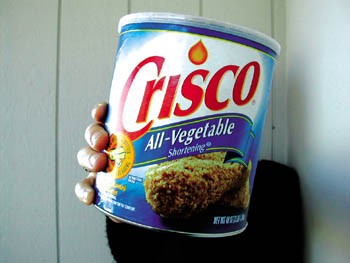 Fluffy Pillows of Fat: What’s inside isn’t pretty to look at, it’s not good for you, and it doesn’t taste good out of the can. But Crisco can work wonders.

The long and the shortening of fats

A young girl, too little to read, was hungry for sweets one day, so she went rummaging through the floor-level kitchen cabinets in search of goodies. And she did find something: a blue can, round and large, with a lovely photo of a chocolate cake on the front. The girl opened up the can and saw that its contents were creamy white–frosting!–just as the label had promised. So she stuck her hand in the can and licked a big blob of the stuff from her fingers, only to find that it was . . . well, it was not frosting.

Yes, that girl was me, and I have learned my lesson: Crisco is not yummy. It can, however, make things yummy, a fact, though not a pretty one. We demonize fat, and shortening is now the most demonic of fatty demons, the Saddam Hussein of fat.

That means that butter, lard, schmaltz, and duck fat are bad. Which sucks, because these are truly wonderful fats, packed with flavor and aroma. Their sources are also discernible, tangible: cows, pigs, chicken–the “barnyard fats.”

Then there’s shortening. Shortening is unsaturated vegetable oil that has been hydrogenated, meaning hydrogen atoms were added so that it stays solid at room temperature. (Though shortening may look solid, it contains over 80 percent liquid oil, suspended in a lattice of fat solids. Mmm!)

Hydrogenation converts the unsaturated bonds in the oil into saturated bonds, transforming double bonds from the natural “cis” configuration to the “trans” configuration. In short, this equals the dreaded trans fat, the same trans fats that are linked to heart disease. I’m not so sure, but I think this means that shortening is even worse for you than barnyard fat, because barnyard fats are naturally saturated, while shortening is manufactured to be so.

Let’s give this satanic grease the benefit of the doubt and look at the good things about shortening (hereon referred to as Crisco, just like people call tissues Kleenex and gelatin Jell-o): it’s vegan; it’s parve (and kosher); it’s shelf-stable; and it tastes like nothing! How’s that for versatility?

Procter and Gamble launched Crisco–initially called Krispo, then Cryst–in 1911. To better acquaint housewives across the country with their new product, Procter and Gamble blanketed the nation with advertisements, cookbooks, and an army of home economists trained to demonstrate the cheaper, more convenient merits of Crisco over butter or lard. They also gave away a cookbook, The Story of Crisco, whose 615 recipes all contained Crisco.

Marion Cunningham, she of the Fannie Farmer Cookbook and the grand dame of American baking, uses shortening exclusively in her pie crusts. I like to think that if a product is backed by Marion Cunningham, who, in her 80s, is lively and active and knows more about baking than most of us ever will, it can’t be all bad.

My own pie crusts contain a 60 to 40 ratio of butter to Crisco, the idea being that the butter contributes flavor while the Crisco contributes flakiness. Martha Stewart, who is not a believer in Crisco, uses 100 percent butter in her pie crusts. Mine are better.

I’m of the opinion that the most perfect applications of Crisco are in white-trash food, a cuisine whose cornbread, biscuits, pies, and deep-fried items demand an allegiance to Crisco. Which leads up to frying. “There’s something about frying, especially in vegetable shortening and in such Rosanne-like quantities, that is so refreshingly unchic,” writes foxy English food writer and TV show host Nigella Lawson in her book Nigella Bites.

Frying in solid vegetable shortening, preferably for shallow pan-frying in a cast-iron skillet, is the fastest route to putting us in touch with our white-trash roots. Since shortening melts, I like to think that the final fried product, be it chicken or catfish, will melt in the mouth and be crisp on the exterior and tender and steaming on the interior. You can fry in vegetable oil, true–but you can also make key lime pie with regular limes. It’s for the sake of authenticity.

The greatest thing about Crisco is its duality. A just-opened can of Crisco is a thing of beauty and grace, with its pure, snowy-white top and concentric ripples of smooth, solid fat frozen in time, unmarred. And the can–the can which had so cruelly deceived me as a little girl–asserts its presence boldly in cartoon colors. Crisco is as American as Spam, and probably as loathed.

A neighbor friend who, as a hobby, makes wedding cakes for her massively extended family, frosts her cakes with a mixture of this stuff that’s nothing but a ratio of one cup Crisco to one pound of powdered sugar, with (hopefully) some vanilla in there too. “I think it’s gross,” she says, “but once it’s on the cake, people love it!”

The folks at Crisco have risen to meet the face of trans-fatty adversity, armed with promotional recipes and the claim that Crisco contains 50 percent less saturated fat than butter. In these recipes, the inclusion of Crisco is sometimes questionable at best. Broiled salmon steaks, for example, call for 1/4 cup Crisco, melted, to baste the salmon steaks with. Broiling is a mode of cooking that requires little if any additional fat, though basting a salmon steak with Crisco would probably yield a crisp, browned salmon steak.

Today I plucked my can of Crisco from its shelf in the kitchen and peeked inside. It’s about three-fourths empty and smeared with finger smudges. Taking a sniff, my olfactory nerves were pummeled with a rancid stench, and I realized that I had no idea how old this particular can of Crisco, which has traveled with me through three moves, was.

A single girl, even an avid baker, just can’t make it through a can of Crisco fast enough; once opened, it has a shelf life of about a year. I then resolved to buy a brand new can and launch into a spell of biscuit baking, pie making, and chicken frying.

The simple act of consuming Crisco, which still factors into our diets in the naughtiest nooks and crannies, is extreme in itself. A little trans fat every now and then might hurt a bit–but no pain, no gain.