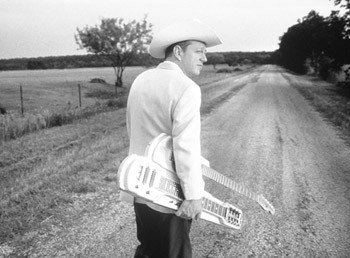 Junior Brown kicks up a storm

JUNIOR BROWN was thawing out a chicken when he called for this interview. The acclaimed guitarist and songwriter says he doesn’t fancy himself as much of a cook. But when he described how his music falls outside of well-defined categories, the word that came to his mind also had a culinary slant. “That’s just the way it came out, like goulash or something,” Brown says.

Now some 25 years into his career, Brown does cook up one of the most unconventional mixtures in music. His sound is rooted in ’50s and ’60s classic country and early western swing, with dashes of rock, blues, and other styles adding spice to his songs. His lyrics are witty and sometimes droll. He’s done tributes to truck drivers and janitors (“Semi-Crazy” and “Joe the Singing Janitor,” respectively), a tale of a man coping with the late-night habits of his hard-partying wife on “Gotta Get Up Every Morning,” blistering surf instrumentals, and a saga about the untimely return of an old flame on his breakthrough single “My Wife Thinks You’re Dead.”

He plays a unique instrument in country music, a contraption he calls the “guit-steel,” which includes a conventional electric guitar and a steel guitar housed on the same body. The instrument–which came to Brown in a dream–allows the country virtuoso to shift from electric to steel without disrupting his songs. Brown’s visual style is also his own, as he is always sharply dressed in suits and his taco-shaped high-brimmed cowboy hat. His rise to fame over the past several years has been as unique as his music and appearance.

Though largely ignored by mainstream country radio, Brown has found an eager audience in fans of alternative country, as well as alternative rock. He’s earned three Grammy nominations and won best video awards from the Country Music Association and Academy of Country Music for “My Wife Thinks You’re Dead.”

Brown recognizes the idiosyncracies that surround him, and he suspects some people don’t know what to make of him. “I think different people see me in different ways,” he says. “Some of them see me as a comedian. Some of them see me as a guitar guy. And I’m none of the above and all of the above. I certainly don’t see myself as a comedian, but there’s definitely a comedic part to some of those songs. Sometimes they see the comedic side and interpret everything as comedic when it’s not. So sometimes they get that door slammed in their face when they get a nice hot guitar lick.

“They go, ‘Wait a minute, this is really not that funny. It’s funny and more.’ ”

FOR BROWN, his road to country music stardom began in 1969 when he relocated to Albuquerque, N.M., and began playing the country music bar circuit. A few years later, he moved to Austin, Texas–a city that had always interested him–and began carving out a successful niche as a sideman on recording sessions and live dates.

He made a few ripples with his first two records, the 1990 debut 12 Shades of Brown and the 1993 release Guit with It. But the 1995 EP Junior High really put Brown on the map. The acclaimed CD Semi Crazy followed in 1996, cementing Brown’s place as one of country’s most distinctive new artists.

“I’ve got sort of an excitement,” he says. “As for technicality, I’m not all that great. But I pull it through with that sort of excitement that I’ve always been able to [generate], a lot of energy. The energy is what people, I think, pick up on, and that’s what’s pulled me through.”