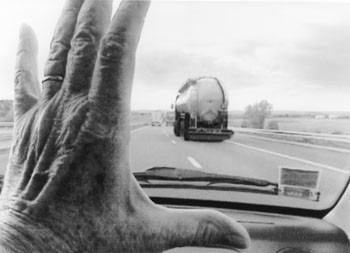 ‘The Gleaners and I’

THE FILMS of Agnes Varda are famous for leading viewers to places they never expected to go. Occasionally these destinations are as bleak as the empty roadside where Sandrine Bonnaire is found dead in 1985’s heart-rending Vagabond. Other times, as in the 1987 comedy Le Petit Amour, you round a corner expecting more farce to find yourself authentically moved by the odd romance between 15-year-old video-nerd Mathieu Demy and 40-year-old divorcée Jane Birkin. Even in her many short films and documentaries, Varda indulges her delight in defying expectations.

Consider The Gleaners and I, a charming new documentary about people who collect things others have left behind. The film begins simply, with a straightforward definition of gleaning–“To pick up grain that the reapers have left behind”–and several shots of 19th-century paintings in which bands of gleaners are oh-so-romantically portrayed, stooping in picturesque fields to pull leftover wheat stalks from the ground.

Suddenly we’re shown a real-life gleaner, an elderly French woman who talks of gleaning the wheatfields as a child during the wars, a practice that has almost disappeared. At this point, we think we know what kind of film this will be–an homage to a fading agrarian custom. But this is a Varda film, so of course we’re mistaken.

What follows is a winding journey among a colorful array of modern gleaners–Gypsies, artists, homeless people, gatherers, rummagers, anarchists, and dumpster divers. These are people who, by necessity or choice, take what others have left behind. This in turn becomes an examination of waste itself, illustrated by such images as the mountains of leftover produce after an open-air market.

Varda, whom cineastes have affectionately nicknamed the Grandmother of the French New Wave, has produced magnificent, daringly experimental movies since the mid-1960s. An icon among students and lovers of film, she has spent the last 40 years redefining the language of cinema, inspiring generations of young men and, notably, young women to take up the camera.

But Varda has been doing something else these years as well: she’s been growing old. One of many underlying themes in The Gleaners is Varda’s love-hate relationship with her aging body, a fascination that appears in short, delightful flights-of-fancy where she does a bit of her own gleaning, capturing curious shots of her own aging hands–“Fascinating and ugly,” she narrates–or her wrinkled, cherubic face peering impishly from behind a handless clock. “A clock without hands is my kind of thing,” she says. “You don’t see time passing.”

These intimately autobiographical diversions beautifully support the film’s subtle message: that in a world with so much richness, nothing should be wasted, or left unexamined and unused.