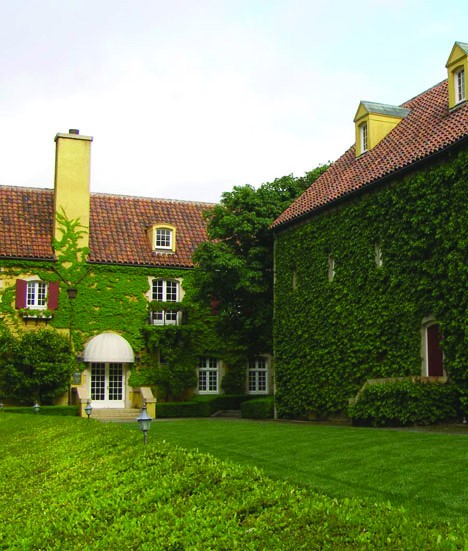 In a standard gag of New Yorker cartoons, a businessman stands aside his son overlooking a factory floor, and says, “Son, one of these days, all of this will be yours . . .” Something of that nature occurred when Tom Jordan asked his son to take over operations of the family winery, except that instead of the factory office, the scene was aboard a cruise ship, and the factory makes one of the nation’s most beloved restaurant wines amid the vineyards of the Alexander Valley.

But John Jordan had already established a law practice in Santa Rosa, and the winery, if I may segue the metaphor, was like a large ship, calmly plying the wine lists of better restaurants, and difficult to turn should it near rocky shores. Jordan accepted the offer in 2005 and took ownership in 2007. Vowing to do away with the “velvet rope mentality,” he purged staff, added friends on Facebook, sent out a Twitter feed and opened the winery to the public for the first time in its 40 years.

Fronted by a stand of poplars, wreathed in ivy and robed in privets, Jordan is very much the Bordeaux chateau that Tom Jordan had originally aimed to purchase. Counter to the prevailing smorgasbord of varietals in 1970s California, and to the trend toward vineyard designates of today, Jordan releases just one master blend each of Cabernet Sauvignon and Chardonnay.

Being in the public eye has its ups and downs, as Jordan found when a fundraising dinner for Texas governor Rick Perry’s ill-fated presidential bid raised some eyebrows locally. (Jordan’s event was not necessarily connected with the winery, a winery representative explained.) But for an estate founded on oil money, Jordan has made strides in sustainability, going all-solar and reclaiming wastewater. There’s an organic kitchen garden, nine cow-calf pairs and three full-time chefs.

A secret bookcase door in the sumptuously furnished “library” opens to a dimly lit parlor, the table set with plates of cheese and amuse-bouche. The 2010 Russian River Valley Chardonnay ($29) has a full complement of oak, butter cookie and Meyer lemon, but only really makes sense washing down a little assembly of sushi-grade hamachi with daikon radish and a quartered, hard-boiled quail egg. The lean, lemon-meringue flavor carries the day, the unintegrated oak wafts away, and I stop worrying about how they peel those little eggs.

The 2008 Cabernet Sauvignon ($52), said to be more in keeping with the house style, has pencil-lead notes over warm berries and fine tannins, but the 2003 Cabernet Sauvignon ($59), heady with fig, plum and cassis, with a plush taste of chewy dark fruit, is my kind of restaurant wine, one that would never offend and is more likely to impress.