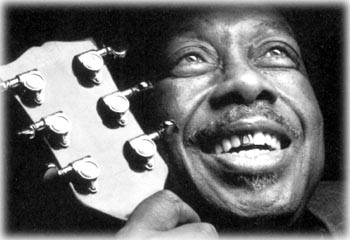 HE HONED HIS CHOPS in the greasy heart of Chicago’s South Side district, which music writer Dick Shurman has called “an urban battlefield” that echoed with screaming guitars, soaring harmonicas, gutbucket pianos, and brash songs of turmoil and triumph. In the mid-’40s, guitarist Jimmy Rogers plied his trade at such popular local watering holes as Pepper’s Lounge, the Macambo Club, and the Zanzibar–rough-and-tumble, smoke-filled nightspots that served up cheap whiskey and loud, electrified blues.

As an original member of the groundbreaking Muddy Waters blues band, Rogers developed a distinctive style–marked by sinewy bass lines and forceful chords–that helped define the landmark Chicago blues sound. While his solo work often was overshadowed by other members of that legendary outfit–including bassist and songwriter Willie Dixon, harmonica ace Little Walter Jacobs, and pianoman Otis Spann–Rogers released a number of regional hits on the Chess label.

These days, he is the last major living figure performing Chicago blues–and 1997 is shaping up as a banner year for this legendary bluesman.

“It’s been a good year,” he says modestly, during a phone interview from his Chicago home.

“Everything is working out pretty nice,” he says with a gentle laugh. “They waited until I got to be an old man and then they started me to workin’ real hard.”

As a teen, Rogers, a Mississippi native, bumped around the South with the likes of guitarists Robert Jr. Lockwood and Robert Nighthawk, both ex-running mates of late blues icon Robert Johnson. He later settled in Chicago–sometime between 1941 and 1945–playing cramped bars and backyard parties and teaming up with such local heroes as harmonica players Snooky Pryor, Sonny Boy Williamson, and Little Walter Jacobs.

In 1945, a co-worker at the Sonora Radio & Cabinet Co., on the west side of town, introduced Rogers to McKinley Morganfield–better known as Muddy Waters–also a Mississippi transplant. “Muddy had a cousin who worked with me. He brought Muddy by where I stayed, and me, him, and Little Walter started playing in the living room,” Rogers recalls. “From there we started going into the clubs. We called ourselves the Head Hunters because we were the baddest group going.”

THEIR RELATIONSHIP lasted 12 years. The group that coalesced around Waters, Rogers, and Little Walter recorded a body of work for Chess Records that remains the definitive statement on Chicago postwar blues. Classics like Waters’ “I’m Your Hoochie-Coochie Man” and “Mannish Boy;” Little Walter’s “Juke”; and Sonny Boy Williamson’s “Don’t Start Me Talking” all had one thing in common–they featured Rogers’ sterling guitar work.

“We got along real good,” says Rogers of his close relationship with Waters. “We stuck together, even in the tough times.”

Many of Rogers’ own tunes that he recorded for the Chess label–including “Ludella,” “That’s All Right,” and “Chicago Bound”–displayed distinctive songwriting second only to Willie Dixon’s on the Chicago scene.

But Rogers grew disillusioned with the music business; like many other artists, he was ripped off for royalties by the Chess brothers. In the mid-’60s he settled down to run a clothing store. “I have a lot of children–I’m a family man–and I was just trying to raise my kids,” he explains.

The store burned down and Rogers began a slow comeback, sparked by an obscure 1971 album on the ill-fated Shelter Records label and followed by several hard-to-find European releases.

In 1984, he recorded Feelin’ Good with up-and-comers Rod Piazza and the Mighty Flyers (it was reissued on the Blind Pig label in 1994). The album drew rave reviews.

So how does he feel about his newfound success? “My kids are grown up and I’m a grandfather now,” says Rogers, who plays nearly 250 concerts a year. “They all appreciate what I do, so I’m just having a lot of fun.

“Everything is shaping up real good,” he adds with a chuckle. “I’ve just got to keep on rolling, that’s the way I do it.”