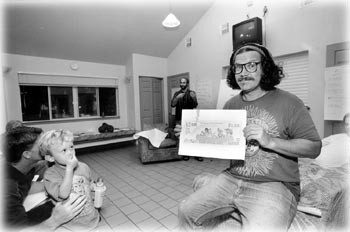 Cash in Hand: Stefan Goya shows a mockup of a local currency note modeled after the fabled Ithaca Hour.

Sonoma County activists may
issue their own currency

CRAVING MORE CASH? Not those familiar greenbacks adorned with dead presidents, but a colorful currency exclusively for Sonoma County, featuring indigenous animals, or local landmarks, or a boat-full of old ladies, babies, and pierced-punk rockers floating down the Russian River.

It may sound crazy, but creating your own money–even during a cozy potluck dinner–does not necessarily lead to jail time.

Uncle Sam may be crushed to learn his bank notes aren’t inspiring much confidence in some local residents. Sonoma County residents are part of a growing number of communities across the nation exploring the possibility of establishing a local currency as a way to stimulate locally owned businesses.

“The money stays in the community rather than going to corporate headquarters,” explains Bill North, one of several local residents pushing for Sonoma County cash. “This would support local products instead of national chains; rather than being backed by debt, this money is backed by skills, products, and labor.”

Stefan Goya, a local manufacturer of wind-chime parts, who’s designed a prototype local currency note depicting “River People”, agrees. “There are all kinds of handicrafts people do and they can’t break into the mainstream economy. If there was an alternate currency, those people would have a better chance,” he says. “This currency would build morale and create a focus.”

Here’s how it works. The non-profit group pushing for an alternate money supply is patterning its version on a successful homegrown currency phenomenon in Ithaca, N.Y., a counterculture haven and college town where the local tender is known as “Ithaca Hours.” The Ithaca Hour is a locally created $10 bill, designated as the average hourly wage. The Hour notes buy a myriad of local products and services, and the credit union accepts them for mortgage and loan fees.

Every business that agrees to accept Hours is paid one or two Hours ($10 or $20) for being listed in the Hour Town directory, which is how the per capita supply of money is gradually increased.

Paul Glover, the chief clerk of Ithaca Hours who created the alternate paper money for the town in 1991, says there are 35 communities nationwide using local currency, five in Canada, and one in Mexico, and he’s had inquiries from France and England.

“It’s becoming popular because the national system is serving a smaller proportion of the general population by putting money into speculative investment rather than productive capacity, by putting money into high-return investments regardless of the effects these investments have on communities or the environments,” says Glover. “I saw national money was being used to degrade the environment and enrich an elite.

“Every community has talent and time that is not compensated by the formal economy, and a community with a money boundary around it is dedicated to bringing its talents into the market and giving us more spending power to trade with one another.”

He says that local currency systems like the Ithaca Hours differ from more common trading or bartering systems because they bring together all sectors of the economy.

Since 1991, Ithaca Hours members have issued $63,000 in local notes, and thousands of people have made transactions with the Hours, including 360 local businesses, such as movie theaters, restaurants, and even the hospital. In some cases, businesses in surrounding communities will honor the notes. Taxes on Hours are paid individually.

The five Ithaca Hours denominations are tinted, and, according to Glover, “reflect nature and cultures that are most widely respected by people who value ecology and social justice.” He adds that the local district attorney has declared that counterfeiting the Hours would be “forgery of a financial instrument,” giving the notes more credibility. Decisions about how much money to release at a given time are made at potluck dinners.

Glover, a former journalist and urban designer, says his full-time job is now to promote the alternate currency idea. He sells display ads, Home Town Money start-up kits, videos, and T-shirts. (He does, of course, accept the Almighty Dollar–$25 for the kit, $17 for the video, and $15 for the T-shirt.)

AT A RECENT MEETING in Santa Rosa, a handful of Sonoma County residents met and voted on a name for the proposed new local tender.

After tossing out about 20 suggestions–including “Sonoma Currency Now,” “Money Tree,” “Mo’ Money,” and “Sonoma Buck Fund”–the group settled on “Our Community Cash”–with the word our to be possibly replaced with an hourglass symbol.

Goya envisions members silk-screening and printing the currency themselves, with a $5 charge for paper and ink costs. Materials such as watermarked cattail or handmade hemp paper could be used, with non-Xeroxable thermal ink and a serial number to deter counterfeiters. A design contest would be held.

Some critics think the group is trying to reinvent the wheel. “The problem is in the distortion of the money system, not the system itself,” says one meeting participant. “I’m not sure they’re addressing the real problem.”

“In Ithaca, we started with 90 people and very little local currency, and it’s taken more than five years to achieve several million dollars of trading,” he says.

“It’s a cultural process that takes its own time.”