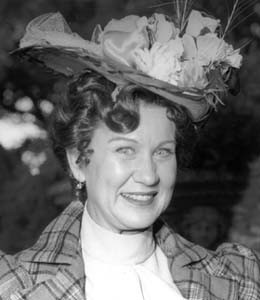 CYNICAL HEARTS sometimes find Hello, Dolly! tough to take. Even for a musical, this is light-hearted stuff, full of sappy songs and extended dance numbers. Without a solid peg to nail down the fluff, this play could float right off the stage.

It’s a lucky thing, then, that this year’s Mountain Play production has the best sort of anchor imaginable: The riveting talent of Meg Mackay in the title role brings this ’60s musical to vibrant, solid life. With her 1,000-kilowatt smile, charming stage presence, and incredible voice, Mackay has no problem catching the collective eye of the audience. What’s more, this diva knows exactly what to do with that attention once she has it: She simply entertains the hell out of us.

The story itself is almost besides the point. Dolly is a cunning but kindhearted professional matchmaker who, it turns out, has herself been lonely since the death of her husband. “Some people paint, some sew, I meddle,” Dolly explains. But living through other people’s romances is not enough. She decides to get married again and sets her sights on the unlikely figure of the curmudgeonly “half-millionaire” Horace Vandergelder.

Forget Bill Gates or Ebenezer Scrooge. Vandergelder could eat those guys for breakfast and still have room for a Howard Hughes or two. A sexist tightwad who treats his employees like plantation field hands, Vandergelder is played with cheerful, convincing nastiness by Norman Hall. It’s hard not to like a man who goes around shouting such gems as “99 percent of the people in the world are fools, and the rest of us are in great danger of contamination.”

Why Dolly is so set on this lovable fellow is a bit unclear, but who cares? The chemistry achieved between Mackay and Hall is wonderful: The funniest moments in the play occur during their verbal sparring. Stir into this volatile mix Vandergelder’s romantically inclined employees (played by Michael Temlin and Eric Carrillo) and the stage is set for comedy.

There are some wonderful singing voices in the cast. Mackay’s powerful, agile vocals sometimes blows the ensemble off the boards. Michael Temlin, as the amorous shop clerk, also brings real life and power to his songs.

For those who prefer movement to harmony, Hello, Dolly! offers plenty of lively dance and slapstick fun. Featured dancer Lawrence Pech wasn’t there on opening night, but his partner Wendy Van Dyck still kicked up a storm during the hilarious restaurant waiter scene. Also, Eric Carrillo revealed some intriguing talent during his short dance numbers.

There is one uncredited cast member who also makes a serious contribution to this whole experience: The rolling vineyards of Jack London State Park provide the perfect frame for musical fun. If the audience was pining for any of the elements of the traditional indoor musical experience, you wouldn’t have known it on opening night at the Mountain Play.

People sat in the bleachers or on the lawn, rocked and clapped to the music, and occasionally remarked on Mackay’s sometimes startling resemblance to Carol Channing. If pure entertainment was the goal, Hello, Dolly! clearly hit the mark.