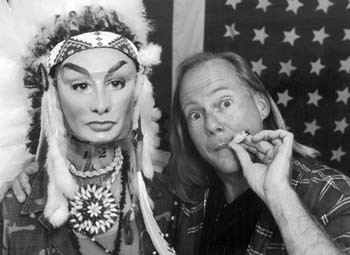 What does SRT’s new staging of an aging ’60s musical say about ’90s morality?

THERE, THAT’S ME,” says Michael Fontaine, a funny smile playing around the corners of his mouth. He’s pointing to one blonde head in a picture full of shaggy young men and women, hair down around their shoulders, covered with peace signs and headbands. They look like residents of some ’60s commune, natives of the era of peace, love, and understanding, but it’s not so. The picture was actually shot during a Summer Repertory Theatre production of the musical Hair in 1983, during that grand old period of Reaganomics, nuclear nightmares, and unemployed air-traffic controllers.

Don’t trust anyone over 30, went the popular saying. But now, Hair itself has reached that critical mark. It’s been three long decades since this countercultural creation of two unemployed actors first appeared onstage to provoke both acclaim and outrage. In 1968, the musical’s profanity, drug use, nudity, and general disrespect for authority sent Nixon’s silent majority into shivering fits. But surely that’s well behind us: Today’s TV and movies seldom pause in their high-velocity delivery of profanity, naked bodies, and drug use (even if the last is most often featured on commercials for Partnership for a Drug Free America). Is there anyone in the country who might still bother to be offended by the likes of Hair?

The Summer Repertory Theatre isn’t taking any chances. “Warning: ’60s morals and profanity” reads the promotional materials advertising this summer’s production of the musical, which opens July 8 under the direction of Michael Fontaine, who played the role of Claude in SRT’s 1983 production. What exactly does “’60s morality” mean, you may ask?

“I thought it was a succinct way of warning people that if they didn’t like the ’60s, they probably won’t like the play,” says SRT promotions director Mollie Boice, who was also a Hair cast member back in ’83. “It was a time when anything went, and we’re kind of at the other end of that spectrum today.”

SRT may have good reason to be concerned. If the ’60s were an era of social conflict, and the ’80s one of material excess, then the ’90s are surely the decade of “Let’s cut arts funding to the bone.” Indeed, the artistic community has watched with growing horror as cultural conservatives have mounted a relentless (and highly successful) assault on alleged indecency, along with, some say, artistic creativity itself.

An embattled National Endowment for the Arts clings to life by the fingernails. Theater companies mount thoughtful plays with gay characters to critical acclaim, only to face the prospect of losing public funding faster than you can say, “No special privileges for homosexuals.” So, what on earth would today’s conservative firebrands have to say about Hair‘s “Sodomy” song, a charming little ditty about … well, sodomy, among other things?

“I think conservatives would run shrieking from the building if they thought their money was going to fund something like this,” says Fontaine. “Everything that they are objecting to–nudity, challenging authority, the use of marijuana–Hair celebrates all those things.”

FONTAINE DOESN’T deny the appeal of “remember when.” Indeed, he embraces it. There is value in remembering the countercultural spirit of that time, he insists, even for younger members of the audience who might think that the Chicago 7 probably had Michael Jordan playing shooting guard. For proof of that value, he points to his young cast, who were generally overjoyed to be dealt a part in Hair.

“I was really, really excited,” says Joseph Hutcheson, who plays Berger. “That was the one show that I wanted to do out of the whole season. I love the music and I love the period, for some reason. I’ve listened to the soundtrack about a million times.”

Hutcheson, 23, hails from American River College in Sacramento. Like other SRT actors, he has parts in several shows this season, including Harvey. But his green eyes light up as he explains the unique appeal of Hair.

“It’s more like a rock concert,” Hutcheson says with a laugh. “You get to be in a musical and be an actor and be a rock star, all at the same time.”

Hutcheson also says the show’s message of love and freedom has deep resonance for him. That’s why he doesn’t have any problem with the musical’s nude scene, which by the way, may or may not happen, depending on how the actors feel each night. Fontaine has decided to leave the decision to disrobe up to each individual cast member.

“I’m happy to say that there are a number of actors in the show who seem incredibly uninhibited,” Fontaine says. “I had one actor who didn’t seem too sure about the nudity at first. But when I mentioned that everyone had a choice, he said, ‘Darn, we were hoping we’d be nude the whole show.'”

As for censorship, the director says that no authority at the college or anywhere else has tried to water down the content of the musical. Still, even such a fervent free-speech advocate as Fontaine gets a bit guarded when talking about public reaction to controversial theater.

“An organization like SRT, which is affiliated with the college, has a responsibility to its audiences, and a responsibility to present the junior college in a favorable light,” Fontaine says. “At the same time, we need to present ideas that are challenging and stimulating for the audience members, without overtly offending them.”

Controversy over content is also a very real issue to Hutcheson. When the young actor is asked whether censorship will be a problem in his career, he doesn’t hesitate an instant before predicting that it will. In fact, he’s already crossed that bridge: “I’ve encountered situations in theater at the college level where things have had to be … ,” he pauses, “… trimmed. It certainly bothered me as an actor. The audience should be responsible for their own minds.”

Both Fontaine and Hutcheson predict that SRT ticket holders will be in easy agreement with that relaxed philosophy. In any case, ready or not, audiences will soon get their first whiff of fake marijuana smoke. The only question is, What if Jesse Helms is in the front row?

“It just depends on what he came to see,” Hutcheson says, grinning. “If he came to see some good rock and roll, he’s going to have a great time.”