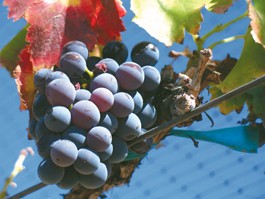 Grenache, long known as the 'fleshy' grape that gives heft to Hearty Burgundy, finally gets some respect

On top of a dusty hill overlooking the Ukiah Valley, a few acres of grapevines rioting with light green, spiky foliage and laden in nearly biblical fecundity with clusters of blue-gray grapes the size of footballs stand as tall as men. To anyone familiar only with domesticated vineyards within the neat confines of trellis wire, its looks like a throwback to a simpler age; it looks, in fact, like a viticultural land of the lost.

Meet Grenache, a staple of ordinary wines the world over that’s also the source of some of the North Bay’s most interesting, vibrant new wines. Despite its persistent obscurity—and an old reputation as a workhorse blending fruit—Grenache has ardent supporters.

“I love that grape,” Peter Mathis says wistfully. “It was the whole reason I went in the wine business.” Mathis says he developed an intense passion for the wines of the south of France, leaving a non-wine career when he decided that he’d make this kind of wine in the United States—eventually. “It actually took 20 years to the day from when the light bulb went off to when I sold first my bottle,” he laughs. But this is high praise for Grenache, considering that Mathis’ day job is head winemaker at Ravenswood Winery, synonymous with the cult of Zinfandel.

Grenache is no wimpy wine either, according to Mathis, who’s not circumspect on the subject. “I associate Grenache with cheerfulness, joy and happiness,” he says. “It feels nice in your mouth, it smells beautiful and it’s not a labor to figure out why it’s appealing. A lot of grapes are cerebral; you have to learn to like them, essentially. With Grenache, it’s natural.”

At once simple and seductive, Grenache almost seems like a spoiler for all that we learned in Premium Reds 1A: Cabernet Sauvignon has powerful structure because of small, thick-skinned, dark berries. Pinot Noir, with delicate flavors, is reputedly shy-bearing, and fades fast outside its narrow comfort zone. Grenache is light colored, thin-skinned and rudely abundant, producing bumper crops under extreme conditions all over the world—and makes a serious wine that’s more versatile and approachable than Cabernet, yet more hearty and just as sensuous as Pinot. Often described as “fleshy,” it’s got a body that lends itself to rosé and red alike, and its forward raspberry, strawberry fruit may be spiked with wild, woodsy herbes de Provence aromas. At its best, it’s not hard to imagine asking, where have you been all my life?

Called Garnacha in Spain, the grape has its origins in the Medieval kingdom of Aragon. Ground-hugging, old-vine Garnacha bushes are dry-farmed even in the arid Iberian plains, naturally limiting its productivity and resulting in intensely spicy, jammy wines.

When Grenache wound up in Southern France, it found a little more rainfall and somewhat more prestige. It’s the principal grape of the Châteauneuf-du-Pape appellation, the heart of the Southern Rhône and former papal summer home. There, Grenache is blended with Syrah and any of a baker’s dozen varietals to make powerful red wines—or nearly equally famous rosé. In Australia, it’s been a standard ingredient for sparkling wines, sherry and port for over 150 years. These days, old-vine Grenache is blended with Syrah and Mourvedre, for which the Australians have a typically straightforward alternative to the Franco-centric “Rhône-style” tag that dogs American wines: GSM.Long grown in California’s Central Valley for sheer quantity, Grenache has been the steady darling of the jug wine trade. A Western Farm Press article recently boasted that one 90-year-old vineyard still produces 11 tons per acre, roughly three times the North Coast average. Although these grapes actually end up as white Grenache, a sweet blush wine similar to equally pink “white Zinfandel,” it’s a safe bet that the recipe for Hearty Burgundy is not exactly heavy on Pinot Noir. But the new Grenache is not the same as the old Grenache. “A combination of site, clone and vineyard practices will yield darker grapes and wine,” Mathis explains. He planted Alicante Bouschet, Petite Sirah and Carignane in his field, primarily to deepen the color. It’s a Rhône-style blend, with a California twist, because Mathis feels that the traditional French components don’t necessarily harmonize the same way on our edge of the world. Perhaps the main factor driving quality is the availability of imported clones; to wit, the new Grenache, same as the Old World Grenache.

When Tablas Creek Vineyard set out to plant a traditional Rhône vineyard near Paso Robles, they weren’t satisfied with the old California plant material that was available. So they sent for clones from their sister winery, which conveniently happens to be the venerable Chateau Beaucastle in Châteauneuf-du-Pape. As the new “Tablas Creek” clones, and others, are planted in North Bay vineyards and farmed for lower yields, old assumptions are being tested—with tasty results. Up in foggy, cool Bennett Valley, Peter Young consulted an expert before planting his Graystack Vineyard. Grenache, said the expert, “wouldn’t ripen until Christmas.” It’s doing beautifully well before Halloween, thank you, the vigorous, vertically trellised vines producing compact, dark colored clusters for Broc Cellars, Pax and other wineries.

Pushing his luck, Young picked the late-ripening grapes extra early one year, prompting the tongue-in-cheek “Peter’s Folly” label. The result was a dark, brooding leathery-black cherry brew. Not so foolish after all.

Just across the hill in Kenwood, Landmark Vineyards is best known for Chardonnay, so when they planted a new plot right on the highway and called it Esprit du Rhône, it attracted attention. “We could have planted more Chardonnay very easily,” says owner Mike Colhoun, “because that’s what we do.” But they wanted to put in something different, something with a finer fix on terroir. After several treks to the Rhône Valley, they decided on a mix that includes Grenache. “In a six-month growing season,” Colhoun found, “the Rhône was one degree off. The climate in Kenwood is incredibly similar to that of the southern Rhône.” “Grenache is almost like a Mediterranean cousin of Pinot Noir,” suggests Steven Canter, winemaker at Quivira Vineyards. Not too similar, but reminiscent, and some specimens really blur the line. Once, Canter was offered a mystery wine that he guessed was an over-oaked Châteauneuf-du-Pape—it was a big, Russian River Pinot Noir. “When Pinot is overdone, is starts to resemble ‘correct’ Grenache,” he says. For a wine-drinking public increasingly leaning on Pinot Noir, Grenache might not be such a leap.

Unfortunately, the oft-parroted conventional wisdom on Grenache is that it’s a short-lived, simple wine liable to oxidize. At biodynamic Quivira, Canter counters this with a permissive “live and let oxidize” approach. “Let it fulfill its nature, early in its development,” he counsels. “It’s true—the must will oxidize right before your eyes. That doesn’t mean it’ll end up that way. Once the oxidizable elements have done their thing and are out of the equation, you end up with a wine whose true nature has come out. Now it’s ready to face the world!”

Grenache may not get its own shelf in the supermarket any time soon, but it does have its advocates. While Syrah gets the limelight at the Central Coast’s annual Hospice du Rhône and at Rhone Rangers tastings, the organizations continue to agitate for the enjoyment of Rhône-style wines in general. The best bet for curious shoppers is a trip to the local wine shop, where they may want to start with illustrative examples of Côtes du Rhône and Spanish Garnacha, often for surprisingly good prices. They may find a temporary diversion from the usual, or even, like Peter Mathis did, their new “desert island” wine.

“If you had to pick one wine to drink for rest of your life,” he says with a smile, “it’s a slam dunk for me.”