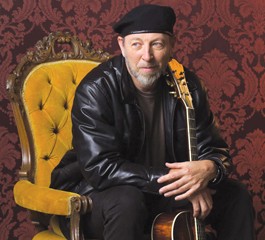 Richard Thompson on girls, guitars and going to heaven

Richard Thompson plays guitar with the dexterity and precision of Mark Knopfler, writes with the authority and brilliance of Pete Townshend, and sings with the ferocity of a wrongly convicted prisoner. So why isn’t he better known?

Hard to say. It’s probably the diversity and sophistication of his songs coupled with record executives’ blunders. And yet in a phone interview, Thompson doesn’t seem bitter about not getting the attention and fame he deserves.

“I’d rather be underrated then overrated,” he says. “There is a different kind of frustration that goes with being a successful but bland musician.”

It was a long road from Thompson’s youth to being voted one of Rolling Stone‘s Top 20 guitarists of all time. He grew up listening to traditional Scottish tunes and mid-century jazz, and as a teenager founded the British folk-rock outfit Fairport Convention. Fairport started in the ’60s performing cover songs, but even when he was 18, the impatiently inventive Thompson was dissatisfied with performing others’ work. So he learned to write songs.

Over the years, he’s become one of the best storytellers in music. One example from Thompson’s 1994 song “Beeswing,” about a wanderer for whom “even a Gypsy caravan was too much settling down,” concludes, “As long as there’s no price on love, I’ll stay / And you wouldn’t want me any other way.”

Combine lyrics like these with Thompson’s guitar style—ranging from soft for ballads to incendiary on his rock songs—and what emerges is a performer who deserves a place among rock’s royalty. Thompson’s British wit, too, is distinctive. When asked where he lives, he replies, “London for the weather, L.A. for the culture.” When fans yell out requests at his shows, he’ll quip, “You don’t think I know what to play next?”

Thompson became better known on this side of the pond in 1982, when he and then-wife, vocalist Linda Thompson, released their final album together, Shoot Out the Lights. With heartbreaking lyrics about a couple in crisis, the album sounds like a husband and wife fighting to the death of their relationship.

Yet the songs, including “Don’t Renege on Our Love” and “Wall of Death,” were written “a year to two years before we split,” Thompson says. “I suppose if they were presaging something, it was unconscious or subconscious. We were not consciously charting our demise. It’s only after the fact that you can look at it and say, ‘Oh, it’s a divorce album—look what these people were going through.'”

After the divorce, Richard Thompson rebuilt his career as a solo artist, hitting new heights on his 1988 album Amnesia, with its riveting song “Can’t Win,” about the emotional wounds parents inflict on their kids.

Amnesia and his next album, Rumour and Sigh, demonstrate the range of Thompson’s work, from personal songs (“The names were changed to protect the guilty,” he says) to imaginative storytelling, evident in his enduring, brilliant saga, “1952 Vincent Black Lightning.”

Even in fictional character sketches, “there’s always a bit of you in there, a bit of your life experience,” Thompson says, though he admits there’s often much exaggeration. “You tend to write about people who are going through extreme circumstances. Just everyday life doesn’t show heroism or how people reveal their humanity. You have to have shipwrecks, you know, and mining disasters.”

Released in 1991, Rumour and Sigh gave Thompson a moment of fame with the song “I Feel So Good” about a convict counting down the days to his release from prison. The album shows the panoramic range of Thompson’s subjects, from the adolescent who thinks he can be a good lover because he “Read About Love” to the disheartened husband who has to beg for his wife’s touch in “Why Must I Plead.”

Thompson’s best albums improve with age. Repeat listenings reveal ever-deeper layers of emotion and musical subtlety. With literary skill, he possesses a knack for humanizing the fringe and downcast characters who live on the margins of our society. From “God Loves a Drunk,” he empathizes that “God loves a drunk, the lowest of men / With the dogs in the street and the pigs in the pen / But a drunk’s only trying to get free of his body / And soar like an eagle high up there in heaven.”

Onstage, even when performing solo as he’ll do during a two-night stand, Dec. 2&–3 at Petaluma’s Mystic Theatre, Thompson sounds uncannily like he’s playing two guitars at once. “I was frustrated that guitarists couldn’t do what piano players could do; separate things with the left hand and the right hand,” he said. “Through a style of finger-picking—playing bass and melody lines at the same time—I’m able to cover more ground. It also comes from playing in a band, and then going out to do solo shows and trying to fill in the gaps.”

After recording Mock Tudor in 1999 for Capitol Records, Thompson elected to leave major labels to manage his own recordings. “It’s much nicer to be in control of the production of one’s own records,” he says, and “not have to answer to anybody else. It’s a bit more local, a bit more down-home. I hope I can continue to do it that way.”

Thompson wrote the instrumental soundtrack for Grizzly Man, the 2005 Werner Herzog film about a man who thought he’d become friends with bears. As in some of Thompson’s songs, the film didn’t end well for the main character.

Now 60, Thompson recently completed an ambitious project titled 1000 Years of Popular Music, covering everything from madrigals to Britney Spears. He has been performing for more than four decades, and to mark the occasion, a definitive four-CD box set, Walking on a Wire, was released over the summer. He has no desire to hang up his axe.

“I’d love to keep playing” for another 10 or 20 years, he says. “It would probably be nice to tour a bit less, but I can’t think of anything I’d rather do than to keep touring and just die onstage. That would be fine.”