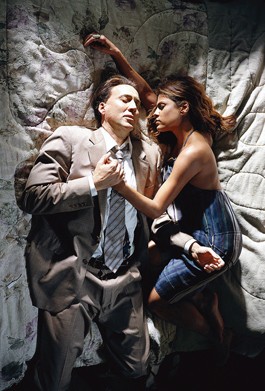 'Lieutenant' remake crawls the back alleys of New Orleans

Watching Nicholas Cage go nutso used to be one of the most reliable pleasures of 1980s film. Times changed. Cage got pressured into playing scenes of being lost in awe as the wilder directors of the ’80s settled down and started thinking about the children. Of late, Cage is a shadow of his former self, staring solemnly at green screens or peering at the secret drawer with Millard Fillmore’s forbidden diary in it.

Werner Herzog’s shaggier-than-shaggy tale Bad Lieutenant: Port of Call New Orleans is a restatement of Abel Ferrara’s nouveau-grindhouse Bad Lieutenant of 1992. Karl Marx could have guessed it: first time tragedy, second time farce. I probably should have returned to the Harvey Keitel original. I saw the hell out of it the first time it was out, a fiesta of despicable cop outrage with drug consumption, sexual harassment and ordinary mania sicklied over with a pale cast of Catholic guilt. This nihilist 2009 redo is plenty crazy, but it’s secular (Herzog isn’t one to worry about God) and heavy on incidents rather than plot.

Cop dramas are always high-concept, and this one is no different. However, Herzog takes the most easy-to-plot kind of movie and makes it unpredictable, thanks to the rolling loose cannon starring in the film. Herzog turns Cage into a Klaus Kinski surrogate.

Cage’s Terrence McDonagh has a bad back—or so he claims to justify the massive amounts of opiates he absorbs. He walks with one shoulder hunched like Richard III, and he’s further impeded by the immense .44 handgun jutting out of the polyester waistband of his suit. If Cage is horse-faced, it’s the horse in Picasso’s Guernica.

Cage is on the case of a murderer who took out five African immigrants. When not recreating, he trails a drug dealer significantly named Big Fate (Xzbit). It’s hard work, and the lieutenant needs lots of fortification from evidence-room cocaine and pills.

Mostly, he’s a kind of flâneur of squalor, sticking his head through tattered screen doors or spending relaxation time with his high-priced honey, Frankie (Eva Mendes, never sweeter). Sleepless, he bops around, shaking down night-clubbers. After a few sleepless days, McDonagh starts to see imaginary lizards. Herzog introduces the motif by having an alligator POV shot, the giant reptile balefully looking at another run-over gator on the highway (his mate? is he swearing vengeance?). Meanwhile, the lieutenant is trying to fix his bookie’s daughter’s speeding ticket among the wreckage of overturned cars and gator guts.

Fine supporting work abounds, with Jennifer Coolidge as a sloven, soaking up all the beer in the bayou. She’s given a makeover at the end, so Coolidge can show off the finest prow this side of the USS Constitution. And the criminally underused Fairuza Balk is a dirty state trooper who can’t seem to keep the lieutenant awake for a tryst.

Bad Lieutenant: Port of New Orleans seems intent as a franchise launcher; maybe they can stand Leslie Nielsen up for the last episode. But Cage and Herzog make it clear they’re not rooting for this wreck of a man. New Orleans is essential to this grimy film’s force: the lowering sky—a black miasma, perforated by high-rise towers—endless horizontals of slums, liquor stores and parking lots punctuated with long twitchy elevator rides. It’s a canvas for Cage’s hideo-comic outbursts. (One about “a lucky crack pipe” seems particularly quotable.) The movie has Herzog’s lizardlike eye for mania and the drug-sucking life. This lieutenant is a kid in a candy store: “It’s amazing how much you can get done when you have a simple purpose!”

However, the film can’t find its ending. Cage’s electric enthusiasm is bound to be downgraded by some. Truth is, he’s so much damn fun no one wants to see him shift gears and get into the soulfulness of the role, as he must. In short, it’s another movie that would be heralded as deeper if there’d been subtitles.