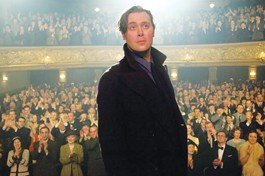 In considering Me and Orson Welles, I can’t help but remember Pauline Kael’s lead for her review of the 1982 film My Favorite Year: “[It’s] about hero worship, and—surprise!—it’s for it.” Me and Orson Welles‘ take on Welles is no such surprise. No one gets a Pulitzer for pointing out that Orson Welles is a more fascinating figure than Zac Efron. It’s also not news that Efron has something. The star of the phenomenally popular High School Musical franchise is an accomplished song-and-dance man; he can’t resist a little step-and-slide while waiting for his date to climb the stairs to her apartment.

It’s likely some director will find the right way to graduate Efron from the juvenile stage, and such a director should emphasize his hard shiny shell. Efron would make a great Pal Joey, for instance, and eventually he’s going to have some of Gene Kelly’s slight ruthlessness. Here, Efron just takes the spotlight away from a far more fascinating figure. Director Richard Linklater’s focus is more upon an innocent pup of 1937 than in the rising of Welles.

Efron’s Richard is a high school student who literally wanders into a small part in Welles’ production of Julius Caesar at the Mercury Theater. The theater itself is a ruin with gaping trapdoors that tend to swallow actors whole. Richard will be working for free in his three- or four-line role as Lucius, playing a ukulele disguised as a lute. Dealing with the moods of the already notorious Welles, Richard is drawn by two women: one is Welles’ assistant, Sonja (Claire Danes); the other is a yearning would be writer (Zoe Kazan) who longs to get into the New Yorker.

Shooting at a restored old theater in Douglas, on the Isle of Man, Linklater recreates Welles’ New York staging of Julius Caesar in fascist black-shirt costumes. This was a stripped-down shocker of a production that lasted one hour and 45 minutes without intermission. The stage scenes are the most compelling in the movie; we can see effect of “Nuremburg lighting” in the finale and the quotes from Mussolini’s anthems in Marc Blitzstien’s score.

Welles played Brutus, and in Wellesian fashion he bent the heavily edited text around the noble assassin. But his acting was apparently not the true thrill of the production. And Linklater sensibly concentrates on the graphic fist of this Caesar. It was a preview of the intensity Welles would later bring to the cinema.

Christian McKay’s version of Welles is routinely delightful and unpredictable. He misses a little of the real man’s impudence; the emphasis here is on the man under stress, as opposed to his startling playfulness. The voice isn’t overdone but it sounds very right on the ear. McKay is fleshy enough, but he distractingly resembles Carl Reiner. James Tupper also gets the essence of Joseph Cotten through voice and mannerisms, though this Cotten here is seemingly more interested in girls than acting.

Simon Callow’s excellent book Orson Welles: The Road to Xanadu is a helpful background to the parts Linklater can’t get on screen. Callow notes that Welles’ version hadn’t been the only proposed staging of Caesar that alluded to fascism. The actor-turned-historian also notes the textual limitations of a Brutus-centered production, and how much sound effects and lighting helped a cash-strapped theater company of the 1930s. And the interviews are enlightening; Norman Lloyd, here played by Leo Bill, described Welles’ take on Caesar as “Costa-Gavras.”

The problem is that Richard’s weeklong rapture with Orson leaves him where he started. Kazan, button-cute as she is, doesn’t hold up her end of Richard’s triangle, particularly when we see her muttering “Truth is beauty, beauty truth” to an actual Grecian urn. Linklater’s unforced handling of the cast is a plus; as Welles’ expression has it, Linklater doesn’t push the river.

Tasty bits of history and the even-handed approach to Claire Danes’ lively character arre a plus. But one feels that had the movie come out in favor of hero worship, it wouldn’t have hurt. There’s a kind of moral monstrosity placed on Welles, making him an ungrateful brat who turns on people. And I couldn’t get behind the moral outrage we’re supposed to feel when Welles shows interest in Sonja. If a man is a genuine king, it’s hard to resent him a little droit de seigneur.