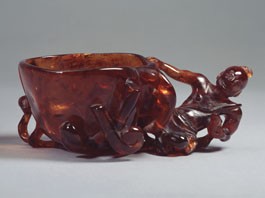 Amber Dreams: This bowl carved of amber serves both form and some function.

In the public mind, three centuries of the imperial Ming dynasty come down to the vase. The porcelain is haunting, underglazed in a sky-blue to glow creamy white. The once-guarded science of porcelain making is available to every community college’s ceramics class, so the divinity of these vases must seem a little faded. In our era of mechanical reproduction, even Grecian urns don’t wring any Keats out of the average passer-by.

There are valuable and beautiful Ming vases on display at the San Francisco Asian Art Museum’s summer show, “Power and Glory: Court Arts of China’s Ming Dynasty,” outlining the arts of the regime (1368–1644). This is an ambitious, expensive and politically fraught borrowing of treasures from three different Chinese museums.

In the ground-floor galleries, the growing richness of the emperors is seen in luscious white nephrite jade, carved into belts and pendants, glowing like starlight. Overlooking some of the treasures are silk paintings of the emperors in their serene mildness, posed in stiff gowns embroidered with heraldic animals.

Glazed stoneware, preserved from the ages underground, includes a segment of the arched gate of the Temple of Gratitude, circa 1412–1431, featuring an elephant with squinting, human eyes. The show also features specimens of gold-threaded “Heavenly Splendor” brocade, woven into a pattern of disbelief-inducing intricacy.

Perhaps more heavenly and splendid: a Tibetan tanka, a gift from the emperor to the high lamas. This silk satin embroidery depicts Raktayamari, three-eyed “Red Conqueror of Death,” in midcopulation with his consort goddess. It has a lavishness and sophistication that might not have been rivaled in the world of 1400.

Preferring art on the human scale, I was more taken by a Wu Wei painting. Wu (1459–1508) was officially declared “the Number One Painter” of two imperial regimes, though he was a rough-houser, a Bukowski. Wu’s A Monk Enjoying a Moon Painting depicts a wanderer staring in amorous glee at a fine scroll. His physique suggests that the plump friars on German beer bottles had Chinese cousins. This monk has a square chin and a boxer’s nose, and he holds the rolled-up lower end of the scroll at a downward angle, like Groucho’s stogie.

Over the course of the dynasty, the emperors left Nanjing to establish a new capital in Beijing. Here, the emperor and about 60,000 of his closest friends retired from the world. The Ming flourished at the same time as the European Renaissance. And these Chinese paintings recall incidents and heroes of earlier times, just as European artists looked back to ancient Rome. China, too, had its age of exploration, like Europe. Part of the show discusses the emperor’s treasure fleet with mariners who voyaged from Surabaya to Mombasa. “The emperor did not trade,” explains the museum’s Dr. Michael Knight. “He received tribute and he gave presents.”

The difference between the Ming and the European Renaissance is the former’s lack of interest in everything outside the palace walls. Rather than initiating the growth of the individual, the Ming reinforced connoisseurship, rank andrigid tradition.

As the Beijing Olympics commence, one hears all the grumbling about how these next decades will be a Chinese century, just as the last was an American century. If this is the case, this show provides some solace. This art provides a tremendous argument for the human race, no matter what language that race speaks.