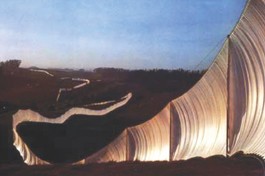 Those who remember Christo and Jeanne-Claude’s Running Fence: Sonoma and Marin Counties, 1972–’76 tend to really remember it. And according to filmmaker Wolfram Hissen, people still see the Running Fence even now. “I always have people tell me that they think they see it, sometimes when the fog lies low over the hills,” he says by phone from his temporary roost at Santa Rosa’s Flamingo Hotel.Hissen is in town for the fourth time since March, when Christo, Jeanne-Claude and the Smithsonian American Art Museum all agreed to let him make a film about the Running Fence experience. Since then, this German native has been high-tailing it over the North Bay’s back roads interviewing ranchers and volunteers who helped with the project. He has organized an informal reunion for Christo and Jeanne-Claude to meet with these landowners and helpers on Sept. 12 in the downtown park in Bloomfield. The public is welcome.Hissen’s own life was changed by the Running Fence. “When I went to college 30 years ago, I saw the Maysles’ film on the Running Fence, and that was such an eye-opener for me that I told myself that either I’d make art like that or I would make movies like that,” he says. Brothers Albert and David Maysles (Gimme Shelter, Grey Gardens) have long recorded Christo and Jeanne-Claude’s projects.

Hissen has been making reportage of Christo and Jeanne-Claude’s work since they wrapped Paris’ Pont Neuf in 1985 and has just finished working on Along U.S. 50, a documentary chronicling the troubles the artists are having completing their Over the River project in Colorado, in which the Arkansas river is almost wholly roofed. “We discovered how many people are violently against it,” Hissen says. “Environmentalists, yes, but it’s basically people who have religious concerns: they think it’s an insult to the Creator. In English, we have this wonderful word ‘create,’ and they’re asking how can artists from New York come and impose their art on this valley that is already a piece of art.”Hissen’s Running Fence at 33 film will premiere next April at the Smithsonian in conjunction with an exhibit of Running Fence ephemera the institution has just purchased. Hissen says that Smithsonian curators said to him “that they bought the Running Fence exhibit because they believe that it’s the most important American artwork in the second half of the 20th century.

“There are no living artists who have reached more people than they have,” he continues excitedly. “There is no category in which they will fit. That’s still a big problem for art historians who wonder where to put them. But they don’t want to be put anywhere! They are just doing what they think is right.”