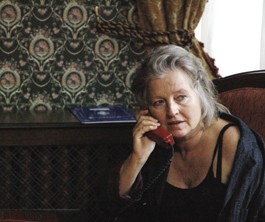 Writer-director Fatih Akin, a German native of Turkish ancestry, likes to trade in cross-cultural identity politics. He avows that many mutual illuminations may be had from Germany’s stance toward its swelling Turkish population and Turkey’s stance toward its impending Europeanness. That’s a lot to ask of a movie, but Akin phrases his questions gently, and he gets compelling results. To make a complex story simple, The Edge of Heaven is a tale of a father and son, two mothers, two daughters and two cultures.

Ali (Tuncel Kurtiz), a Turkish widower living in Germany, discovers his preferred prostitute, Yeter (Nurcel Köse), is a fellow Turk, pays her to become his concubine and brings her home to live with him. She’s not sure about it, but a menacing admonition from a pair of Muslim thugs to “repent” suggests that perhaps a change of pace is in order.

Ali’s son, Nejat (Baki Davrak), a comfortably assimilated professor of German literature, isn’t sure about the arrangement either. But he softens when informed that Yeter’s been tricking to pay for her daughter’s education back in Turkey. Of course, her daughter, Ayten (Nurgül Yesilçay), doesn’t know this, but neither does Yeter know that Ayten has become a revolutionary—on the run, as it happens, from Turkish police.

In due course, Nejat has a solemn occasion for a trip to Istanbul to find and help the young woman. But his timing is perfectly and poignantly wrong, for she has just fled, seeking asylum, to Germany. There, she meets a wide-eyed young German woman, Lotte (Patrycia Ziolkowska), who takes her in and becomes her lover, though it means they both run afoul of Lotte’s perfectly respectable middle-class mother, Susanne (Hanna Schygulla, Fassbinder’s famed muse), herself a former idealist who has grown politically complacent with age and experience.

Thanks as much to Akin’s script as to the actors’ consistently excellent performances, any one of these characters could carry a movie of his or her own. But The Edge of Heaven is very much a shared venture. The way it works is like a rather highly poised relay race: handing the narrative off from one character to the next, leaving the frayed braids of each story to loop back around when nearly forgotten or at least not expected, and earning—against what seem at first like very long odds—a deeply felt fraternity.

Viewers waiting for these characters to discover how their arcs are connected will do so in vain. The closest people come to a proverbial crossing of paths here is passing each other by while traveling in opposite directions. Connections are missed and broken as much if not more than they’re made.

Likewise, there’s a conspicuous amount of charity on display—people take each other in, and do each other major favors, without very much provocation—but probably just as much mercilessness. Ayten’s plea for asylum, for instance, fails, and she suffers for it greatly. The others suffer too, for all of their choices—Ali’s arrangement with Yeter, Lotte’s battles with her mother, Nejat’s journey to Istanbul—bring as much despair as renewal.

All of its barriers to communication and narrative linearity, while arguably most appropriate for a dramatization of Turkey’s tentative steps toward the European Union, do lend the movie a slight aura of preciousness, just the sort that American audiences have found particularly endearing in recent foreign films. So, yes, The Edge of Heaven is a little like Babel. But Akin’s film has more life and less self-congratulation, which makes all the difference. That he doesn’t coddle his characters only authenticates his generosity toward them. That he twice gives away their unhappy fates with chapter titles in advance only makes their time onscreen seem more precious. An exquisitely wistful feeling emerges, from knowing what’s in store but wondering how it will play out.

The Edge of Heaven depicts a randomly cruel and violent world, but has a way of shepherding viewers through it that might be called optimistic. The movie doesn’t preach to the choir of knee-jerk cynicism, nor does it offer condescending platitudes. What it does is not forget to make its politics personal.