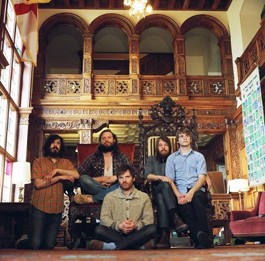 The sentiments inscribed on the Fleet Foxes’ album jacket are startlingly heartfelt. They humble themselves, apologizing to their producer for all the “flailing around, recording ourselves poorly”; the reader is strongly advised to love his or her family, as they are “the only important thing in the world”; and a large portion of the band’s thank-yous are devoted to musicians and artists ranging from Debussy to Dylan. The Fleet Foxes don’t just bring a refreshing approach to the obligatory album dedication and copyright listings. They are making folk music relevant again.

Fleet Foxes, the self-titled LP released by five young men who hail from all over Washington state, has none of the showy or synthesized beats used by countless new bands attempting to break the mold of alternative indie music. They are fast becoming the band other bands admire, and it’s easy to see why. The music is graceful, even elegant, and it maintains an easy sincerity as each member lends his voice to guitarist Robin Pecknold’s winsome lyrics.

“We decided to put an emphasis on harmony, simple three- and four-part block harmony,” Pecknold recently wrote on the group’s MySpace page. “The songs are simple, songs about our friends and family, history, nature and the things around us in the Pacific Northwest. Instead of complicated vocal melodies, we try to use guitars and mandolins and banjos and other little guys to fill the melodic spaces in the music.”

The “other little guys” round out the melodies and etch in a subtlety that is not wasted on even the most unaffected ear. Each song is full of sound, levels and levels of it, without being overwhelming. Because the band found itself inspired by music’s transportive ability, the sounds coming out of this album act like a time machine of sorts. The tracks, while written from Pecknold’s experiences, trigger memories not thought of in years.

“Music activates a certain mental freedom in a way that nothing else can,” Pecknold writes—under the name Warren Gamaliel Bancroft Winnipeg Harding—on the back of the CD jacket. “You can call it escapism if you like, but I see it as connecting to a deeper human feeling than found in the day-to-day world.”

The members of Fleet Foxes grew up on the soft and scratchy sounds of their parents’ albums: the Beach Boys, Crosby, Stills and Nash and every other band you’d expect to find in the record collections of baby boomers. These are the classic influences behind the lilting, wind-in-your-hair harmonies of Fleet Foxes, which explains my undeniable urge to jump in the car and cruise down the coastal highway after the first listen of this surprisingly well-rounded debut LP. The only letdown on the entire album is the absence of “Mykonos,” a gorgeous song found on the Foxes’ accompanying EP, Sun Giant, released in April 2008.

With names like “White Winter Hymnal,” “Ragged Wood” and “Tiger Mountain Peasant Song,” the self-described “baroque harmonic pop jams” created by Fleet Foxes strike a chord, literally, with nature. The album feels like a return to the earth, to the roots of indie folk music, when Simon didn’t hate Garfunkel and Joni Mitchell had just released her all-acoustic 1968 debut album, Song to a Seagull.

It’s true that Fleet Foxes draw numerous comparisons to the folk rockers of the past, and some of the present—My Morning Jacket, mostly (like many alternative musicians, they’ve also been hailed “a softer” Animal Collective)—but remarkably, they manage to simultaneously sound both familiar and uniquely innovative. The songs are comfortable, like that favorite sweater that comes out every winter, and evoke a nostalgia for a time when a guitar, a clear voice and a campfire in the mountains were the makings of perfection. Just as the Beach Boys wrap the listener completely into the setting and emotions of the lyrics, so do the Fleet Foxes recall a simple creativity that has been missing from the recent canned and predictable additions to the mainstream music scene.

“We hope you enjoy it,” concludes the album’s liner notes. “Music is a weird and cosmic thing, its own strange religion for nonbelievers, and what a joy it is to make, in any form.”

Don’t assume that the Fleet Foxes’ softness underestimates their power as artists. They are a force to be reckoned with, although they may not know it yet.