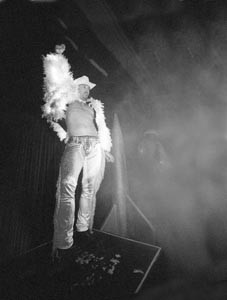 Tray held high, a smiling waitress makes her way across the chaotic dance floor. Just about the only woman in sight, she dodges two shirtless guys doing some hip version of the lambada, then makes a wide circle around a slender raver twirling a pair of glowsticks and watching the green trails in the huge mirrors on the wall.

But getting back isn’t going to be easy. Suddenly, as if by prearranged signal, a fresh wave of club-goers surges down the steps, bringing new energy and new body heat to the already crowded dance floor. All across the room, more shirts come off and the dancing gets wilder.

No, this isn’t some club in the Castro or some after-hours gay rave south of Market. Welcome to Saturday night at Club Fab in Guerneville.

Since it opened just over a year ago, the 7,000-square-foot dance club has been gradually building a reputation that now extends far beyond the boundaries of Sonoma County. Most summer nights, gay men and lesbians from Santa Rosa, San Francisco, and beyond pack the dance floor. But several new events are also attracting a growing number of straight patrons.

In the process of building an audience, Club Fab is doing its share to help reinvigorate nightlife in the river area. And that, says Greg Seiler, who co-owns the club with his partner, Edward Martinez, was the whole point of opening the doors in the first place.

“We just got tired of apologizing to our friends when they would come up from the city,” says Seiler, a San Francisco resident who has maintained a second home in Guerneville for more than a decade. “Following the ’95 flood especially, there was no nightlife. It just sucked. When this building became available, we just had to do it.”

“We wanted to bring a world-class entertainment venue so that people would have another reason to come up, because a lot of people were coming up and not taking the area seriously,” Martinez adds.

But before Club Fab’s doors could open, the new owners had a few challenges to overcome. The building, which occupies a prime position on Main Street, has a long and colorful history. Built in 1946 as the River Theater, it was a movie palace until 1984, after which it took on a new incarnation as a string of dance clubs and concert halls with names like The Pit and Ziggernaut. But time and neglect took their toll, and when Seiler and Martinez began making their plans, the interior was a mess.

“When we walked into that place, it was being foreclosed,” Seiler explains. “They had taken all the electrical equipment and clipped it loose with wire cutters. It was in a big pile waiting to be auctioned off. We had to put the whole place back together. It was kind of like rebuilding the Mayan Empire.”

After an extensive renovation (which carried a total price tag that Seiler estimates at somewhere close to $100,000), the building now sports a new dance floor, two state-of-the-art sound systems, and a multilevel arrangement of lounges, complete with pool tables and spots to check out the dance-floor action. And, of course, there’s the giant rocket.

“Edward owns the biggest prop house in San Francisco,” Seiler explains. “So we’re able to bring in all kinds of fun things. One night we brought in a 20-foot Egyptian Pharaoh.”

But props aren’t all that’s coming up from the city. Because the club also features an upgraded DJ booth with big-city-style equipment, Seiler and Martinez are able to attract guest DJs from San Francisco.

And their fans follow. Seiler estimates that, on many summer nights, roughly 70 percent of his patrons are from outside Sonoma County. But tourism from the south falls off during the winter months, which is one reason the club has worked hard to build a local audience.

The effort seems to be succeeding. For one thing, an increasing number of straight people are coming through the door, drawn primarily by Club SEXY, a dance party hosted by DJ Dave Matthias from radio station SEXY 95.9. The club’s cabaret nights, which feature drag talent from across the Bay Area, also draw a mixed audience.

“I’m amazed,” Seiler says, “by how many straight people show up on those nights.”

What does the future hold? For one thing, according to Seiler, Club Fab will play host to more live music. The west county-based Institute for the Musical Arts recently put on a concert at the club, and singer Vickie Shepard performed on Memorial Day. Expect to see more acts along the same lines, Seiler says.

“But it’ll be a different kind of music–nothing angry,” he adds with a laugh. “No angry music allowed.”