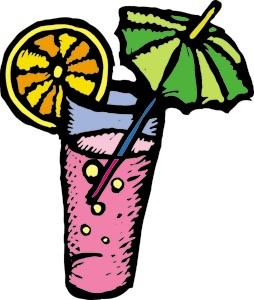 Belly up to the bar and blow your mind

By 1862 the first bartender’s guides were circulating, and British correspondents already were complaining about American drink names; “an obvious defect in manners,” said one.

You’ve seen them before: the shot glasses glowing with a liquid rainbow, the martini glasses radiating colors not found in nature, the coconut goblets topped with an umbrella, a plastic sword, and Carmen Miranda’s hat. They’re the drinks that make you wonder as you sip carefully at your vodka tonic, “What the hell is that?”

Believe it or not, they all have names, and some are listed in standard bartending textbooks. Most of them even make sense. Girl Scout Cookie? It’ll have mint and chocolate (provided by dark cacao and white creme de menthe, layered with Bailey’s in a shot glass). Russian Quaalude? Gotta have vodka, at least, and it does (along with Frangelico and Bailey’s).

But there are other names that reveal nothing: Bad Sting. Ice Pick. Wombat. Pangalactic Gargle Blaster (note: flaming not recommended).

These are all from a book called Simply Shooters: Coast to Coast Shooter Collection, which boasts “over 1150 recipes.” And mind you, that number’s just for shooters.

John Burton, owner of Santa Rosa Bartending School, teaches how to concoct over 100 mixed drinks, which is considered the bare minimum for today’s bartender. But in reality, there are an “infinite number of possibilities,” says Burton.

Two hundred years ago, when mixed drinks were first dubbed cocktails, things were a lot simpler. The cocktail was first described in print in 1906 as rum punch laced with bitters. By 1862 the first bartender’s guides were circulating, and British correspondents already were complaining about the vulgarity of American drink names; “an obvious defect in manners,” said one.

Even then the rage for the outrageous was alive, with names like Corpse Reviver and Chain Lightning. But the cocktails themselves were not absurd: whiskey, rum, and gin, mixed with soda or sours. These simple, strong drinks suited the tastes of the men who were the principal patrons of the saloons in the early 1900s. The women’s temperance movement, combined with a Victorian devotion to propriety, kept public consumption of alcohol to a minimum.

All this changed in the 1920s, when women became emancipated, both socially and politically, and took up drinking as almost a civic duty. A new drinking demographic was born. At the same time, Prohibition settled in, and a thirsty nation sought ways around the federally imposed drought. Speakeasies flowed with strong liquors that were the easiest to bootleg. Faced with liquor of dubious flavor, bartenders created new mixed drinks that simultaneously hid bad liquor and appealed to the new woman drinker.

The names, too, grabbed drinkers with their innuendo; Classic Cocktails lists some crudely named concoctions of the period whose popularity–and formulas–have faded, but whose names live on in a sort of soft-core, F. Scott Fitzgerald fantasy: Atta Boy, One Exciting Night, Bosom Caresser.

Since then, there have been several waves of adventurousness, mainly in response to new spirits and mixers on the market. When vodka and white rum become available in the ’40s and ’50s, lighter, sweeter cocktails appeared on the scene, including the new drink called the screwdriver.

Burton, who has been tending bar for 40 years, remembers the first time a lady ordered a screwdriver at his bar: “People looked at her and said, ‘You’ve gotta be kidding.’ ”

Blue curaçao in the ’60s, Italian syrups in the ’80s–each time something new hits the market, new drinks have to be invented. Now there are thousands of kinds of liquor on the market, scores of vodkas alone. Add to that the different juices, sodas, and mixers, and you have a universe of drinks with just a dash from a different bottle.

Not surprisingly, liquor companies are the prime movers behind the recent cocktail renaissance. They host their own competitions, with cash prizes, and sponsor regional, national, and international events as well. Winners often get written up in industry magazines, and the winning recipes go out with marketing packages.

The newest field of daring drinks is shooters, those miniature cocktails that are created in a shot glass and chugged. Shooters offer a powerful hit of flavor, with surprisingly little alcohol content, says Flamingo bar manager John Timberlake; if you really want to get drunk, get a shot and a beer. But the names promise an extreme experience: Deathwish, Toxic Waste, Hand Grenade, Nuclear Accelerator (flaming definitely not recommended). And it’s difficult to resist the raw sex appeal: Bend Me over Easy, Leg Spreader, Busted Cherry, French Tickle.

THE TAXONOMY of these new creations is elusive. Take the Sex on the Beach series listed in the Shooter Collection. There are nine, including Sex on the Beach for a Week, and not a single common element is to be found in all nine (vodka and Chambord are in six each, peach schnapps and Midori are in four).

The few guidelines that do exist are pretty straightfoward. Blue drinks contain blue curaçao. Green drinks could be lime, Midori, or green menthe (double-check the name for context).

Anything with the word fire, flaming, or inferno in the title could be with Tabasco, cinnamon schnapps, or pepper vodka, or might be set on fire. And anything with an orgasm theme, either explicit or implicit, will have Bailey’s or cream involved (nudge, nudge, wink, wink).

This brings up the gender psychology of these bizarre beverages. Men may go for the zowie, maxed-out shooters of death, but women are the primary consumers of most multi-ingredient mixed drinks, according to bartenders.

“You think men would order a piña colada with whipped cream in front of their friends?” asks Timberlake with a snort. “Women, they like to think they’re shocking bartenders. They’ll come up and say, ‘I’d like a Screaming Orgasm.’