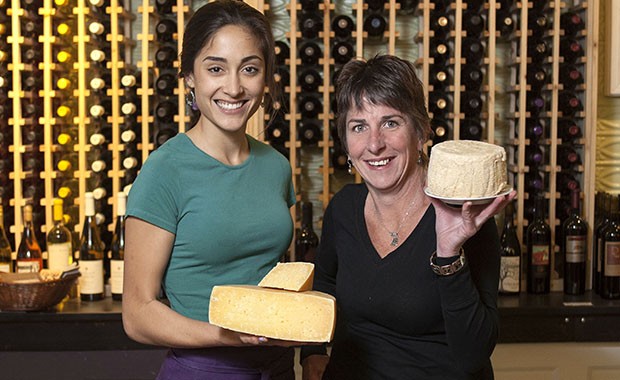 As the story goes, some years ago guerrilla artist Banksy was visiting Sonoma with some artist friends who took him to the Epicurean Connection in Sonoma. Sheana Davis, who knew Banksy’s friends, didn’t think much of the hooded young man spray-painting a stencil on the wall in her back room—after all, there are crows and other images painted by local artist Jonny Hirschmugl in the front of the store, so why not give the back a little love? Only later did she find out who Banksy was, but instead of fawning over his celebrity she was just excited that an artist had been inspired enough to leave a mark in her shop.

“I didn’t know who he was at the time,” says Davis, taking a moment from finalizing plans for her 11th annual Sonoma Valley Cheese Conference taking place next week in Sonoma. “He was wearing a hooded sweatshirt and didn’t say much.”

Davis’ connection to the famous British street artist is not as unlikely as it may seem to those who know her. She’s a champion of local artists, and each month shows a different artist’s work in her shop. She buys one new piece a month, but mostly reserves space on the Epicurean Connection’s walls for the rotating gallery. Davis runs a cheese shop, makes 500 gallons of the stuff each week and founded a conference dedicated to the craft of making the curdled-dairy delight—what the hell does her art collection have to do with cheese?

It’s about celebrating a craft and appreciating art. Davis, a chef who trained in New Orleans before moving back to Sonoma, fell in love with cheese and made her own in 2009. Delice de la Vallee was awarded first place honors by the American Cheese Society the next year. Davis now spends time nurturing new cheese makers, awarding two scholarships to the conference to a new producer each year. Sometimes the eye-opening experience helps influence a decision not to move forward. “Last year, both ended up deciding against starting a cheese company,” she says.

Davis’ straightforward, realistic approach makes the Sonoma Valley Cheese Conference a trendsetter in the industry. Bringing together producers, retailers, inspectors and the cheese-loving public helps create new partnerships and find out what works at each phase of the business. (One year after a session on licensing, many producers filed for trademarks.) And it brings many producers from out of state, too. “We bring a lot of Wisconsin cheeses in, because they’re ahead of us and we can only learn from them,” says Davis.

There have been many memorable moments in the 11 years of the conference. The first year started with a bang—and a pow and a wham and other comic-book adjectives—when fisticuffs broke out between a professor and a raw-milk producer. “We had a brawl,” says Davis. “It was like a punk-rock show.”

The professor, who was adamantly opposed to raw milk, unknowingly consumed some butter made from it. Upon being informed of this, tempers flared and punches were thrown. Since then, however, there has not been as much violence, but there has been love. “We’ve definitely seen friendships form, relationships form,” says Davis. “We’ve seen people who’ve met [at the conference] and now are married.”

The conference can have immediate impacts for local producers. When the Leveroni family’s farm was threatened by eminent domain for a hospital in 2006, “the entire conference went to speak on their behalf at the city council meeting,” says Davis. “It was pretty fun,” she says, adding that Joe Leveroni came back in subsequent years due to popular demand to update his saga.

This year, the conference heads back to its roots at the Sonoma Valley Inn. About 125 invitations were sent out for the intimate event, though the public is welcome to an opening reception and cheese tasting (with mac ‘n’ cheese, sake and beer available, too) on Sunday, Feb. 23, at Ramekins Culinary Center. Keynote speakers this year include Judy and Charlie Creighton, owners of a landmark cheese shop in San Francisco, discussing the evolution of the artisan cheese movement with an official from the USDA and two cheese producers from California and Vermont. The conference also features tours, marketing consultations and presentations on leadership skills.

Davis not only runs the Epicurean Connection, mentors new businesses and makes sure the cheese conference goes smoothly, but she’s also an active participant in the conference. Last year, she was so busy planning the event that her own entry in the mac ‘n’ cheese competition got misplaced. “How do you lose two hotel pans of mac ‘n’ cheese?” she asks.

Hopefully, this year’s event will include her own entry, as well as a few fun shenanigans. “There’s the cheese rolling,” she says, “with a ramp and everything. That’s the punk-rock skateboarder in me.”

Second-generation farmer Jennifer Bice of Redwood Hill Farm and Creamery is a gifted cheesemaker who helped start the Sonoma Valley Cheese Conference with Ig Vella and Sheana Davis. “At that time, artisan cheesemaking was small, and we wanted a way to network with colleagues and provide education,” says Bice. In just 11 years, the industry has blossomed trememdously.

“[The artisan cheese movement] really started in the ’80s with goat-cheese makers,” says Bice. “California cuisine was up-and-coming, and chefs put it on their menus, giving it exposure and creating a market.” Now there are cheeses made locally from the milk of sheep, cow and even water buffalo, as well as entire magazines about cheese.

Bice has been a contributor to this growth with her popular and award-winning goat’s milk cheeses. From the tart, fluffy chèvre to the raw-milk feta, Redwood Hill’s products consistently win medals at the major competitions. In 2013, five different varieties won gold at both the Sonoma County Harvest Festival and the California State Fair. Not one to rest on her laurels, Bice hinted that some new products are in the pipeline. “We are working on a couple new cheeses, but it’s too early to say.”

This year at the conference, she will be on a panel discussing the emergence of the natural food market, and is looking forward to the camaraderie of the gathering.—Brooke Jackson

The Giacomini Dairy, in the hills above Tomales Bay, has been in operation since 1959. Robert Giacomini is a dairyman with a herd of Holsteins, but it was getting harder to support the business by just producing milk. He had a dream of making cheese, and eventually convinced his four daughters to return to the fold to help get the operation off the ground. In 2000, they launched the Point Reyes Farmstead Cheese Company and released the first blue cheese made in California, Point Reyes Original Blue.

The Giacominis will be at the Sonoma Valley Cheese Conference with their award-winning cheese. “We’re as excited as ever and we can’t wait,” says company spokesperson Jill Giacomini Basch. In 2013, their newest addition, Bay Blue, won a gold SOFI (Specialty Outstanding Food Innovation) award—considered the Oscar of the food industry—as well as a Good Food Award and a third-place ribbon at the American Cheese Society Competition. Their toma, a semi-hard table cheese, won second place there in 2012. Point Reyes Farmstead will be participating on a panel called “Publicity Boot Camp.”—Brooke Jackson

The Bianchi family has operated Mountain View Jersey Dairy in Valley Ford since the early 1900s. Now, about a hundred years later, with the price of milk plummeting, many dairy operations are going out of business. Fourth-generation rancher Karen Bianchi-Moreda decided to try her hand at cheesemaking with Valley Ford Cheese Company, and finds the Sonoma Valley Cheese Conference a helpful networking event.

“It’s fantastic,” she says. “I attended my first year and sat in the audience. The next year I was on the panel as a new cheesemaker, and have attended since then, meeting all kinds of great people.” Her first cheese, Estero Gold, was inspired by an alpine-style version her grandparents used to make; it won a gold medal at the California State Fair in 2012. Next came Estero Gold Reserve, which is aged for 16 months; it won Best of Show in 2012 at the State Fair.

Karen’s son, Joe, joined as cheesemaker in 2010 with a freshly minted degree in dairy science from Cal Poly. Together they created a fontina-style cheese called Highway One, which won awards at the State Fair, the Sonoma Harvest Fair and the Cal State Cheese Competition. Karen Bianchi-Moreda is proud that the next generation is getting involved in the family business. “We were able to add a value added product with milk we are already producing and allow a full time position to the fifth generation,” she says. “Doesn’t get any better than that.”
—Brooke Jackson

With a flagship cheese named Fat Bottom Girl and a company slogan that reads, “Making seriously good cheeses without taking ourselves too seriously,” Bleating Heart Cheese has arrived on the scene with a playful attitude. Owners Seana Doughty and David Dalton came to cheesemaking as non-farming amateurs, using sheep milk from Barinaga Ranch to make the first wheels of Fat Bottom Girl in 2009, which were released to critical acclaim.

In the following years, Doughty went on a quest to secure enough sheep milk for her cheesemaking and along the way created Shepherdista (a raw-milk cheese aged two to three months), Shepherdista Crush (the original version soaked in grape pumice) and Ewelicious Blue (a mild and creamy blue cheese). Eventually, she and Dalton purchased a small herd of dairy ewes and partnered with an existing sheep farm to maintain their milk supply, creating Black Oak Dairy.

Ewes only produce milk six months of the year, so Bleating Heart cheeses are available on a very limited basis. Doughty speaks at the Sonoma Valley Cheese Conference on the growing pains of a small cheese maker—her talk is called, “No money? No farm? No problem! An Update From a Small but Growing Cheesemaker.”—Brooke Jackson