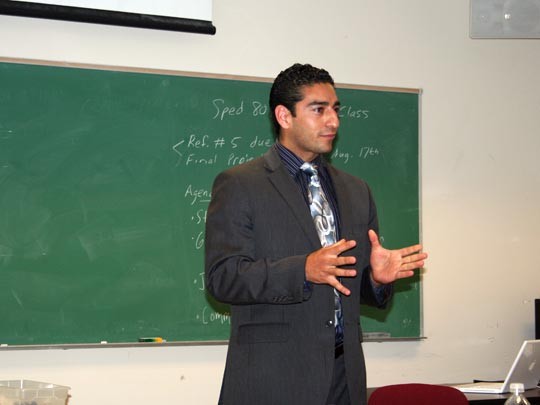 Trial for the underwear peeker pushed off for fifth time

In the continuing saga of what will surely be the basis for a Law & Order episode, 32-year-old Sonoma County supervisor Efren Carrillo’s trial on a misdemeanor peeking charge was delayed this week for a fifth time since his arrest seven months ago on
July 13. This time, Judge Andria Richey pushed the March 7 trial date to April 18 due to a crowded court docket. Carrillo’s lawyer and the prosecution will meet Thursday with Judge Arnold Rosenfield in a closed-door session to try and work out a
plea deal.

Carrillo pled not guilty in December to the charge of peeking following his early-morning arrest outside a Santa Rosa woman’s home, wearing only underwear and socks. The woman called 911 twice, and police arrived to find Carrillo, reportedly intoxicated, and a partially torn screen on the woman’s bedroom window. He was arrested on suspicion of burglary, and police said at the time that they suspected an attempted sexual assault. Carrillo checked himself into a 30-day treatment facility for alcohol abuse shortly thereafter.

Meanwhile, an apologetic Carrillo returned to his post Aug. 20 after his fellow supervisors lambasted him at their July 30 meeting, and Santa Rosa police have yet to release recordings of the 911 calls of the incident. There has since been a call for his resignation, though those cries, led by West County activist Alice Chan, have since calmed down.

No matter the outcome, Carrillo’s trial delays have pushed any resolution beyond the date his county pension vested on Jan. 5. Had he left county employment before that time, his pension benefits would have stopped accumulating and would have only been accessible after age 70, not age 50, as they are now.
—Nicolas Grizzle