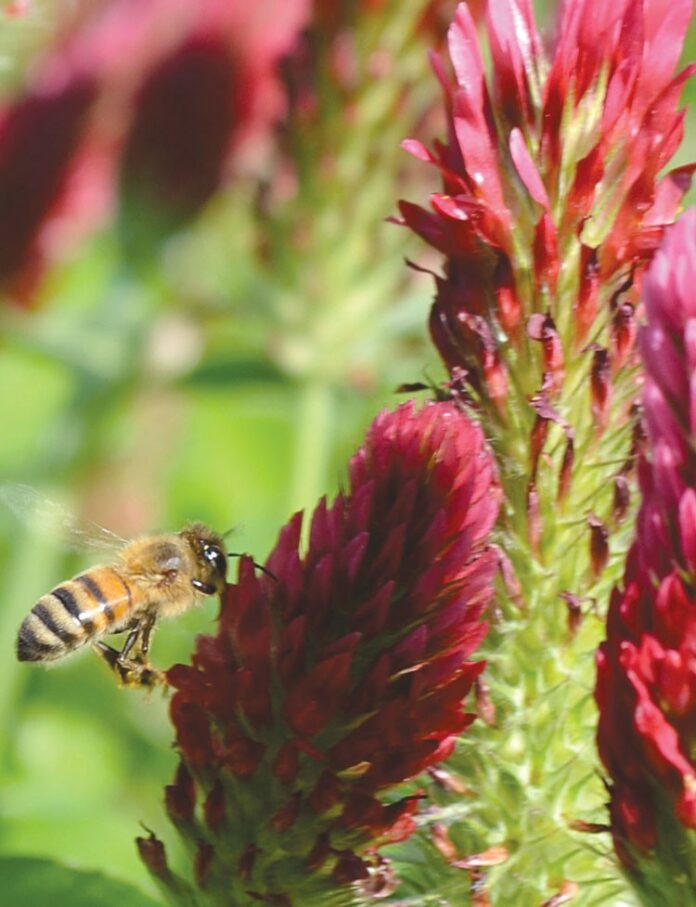 A clover conundrum wrapped in an entomological enigma

I’ve been trying to grow a hardy stand of clover for years, having heard that it’s a good, organic way to enhance the fertility of the soil. As a perk, flowering clover looks a lot prettier than cover crops like bell beans. This year, success at last, thanks to winter rains.

The brilliant, crimson flowers are so nice-looking, in fact, it seems a shame to mow it all down. And while crouching to admire it up close, I see there’s more. The clover is abuzz with bees: big, fuzzy bumblebees and European honeybees gorging on the cone-shaped flowers. And even more: scores of big, gangly crane flies and tiny, quick wasps—if your imagination tends more toward science fiction than nature doc, it’s like a galactic supercity scene of lumbering freighters, speedy transports and nimble speeders zipping purposefully around their own little green world.

Now, I’ve heard that to be a good organic grower, I need to take that clover down. But is it fair to the bees to snatch away this lavish picnic of pollen I’ve laid out for them? And what about those little guys—are they those organically beneficial bugs I’ve heard about? I called on Jeffery Landolt, estate vineyard manager at Benziger Family Winery, for advice.

Landolt affirms that I’ve got to mow that clover before it has bloomed 100 percent. “I shoot for about 75 percent,” says Landolt. “That’s your best bang for the buck. If you let it go to seed, you kind of miss the window, and if you go too early, you don’t get the full potential.” After the clover is tilled into the soil, a process called mineralization slowly makes nitrogen available to the grapevines.

And some of those bugs are indeed good bugs. “Most of them are parasitoids,” Landolt says. “Those little wasps that you see? They’re laying their eggs inside a ‘negative’ insect, and as those eggs develop, they kill that insect. They have this little stylet . . .” And now we’re in sci-fi horror territory.

At Benziger, they help out the beneficial insects in their organically and biodynamically farmed estate vineyards by seeding every 10th row with a season-extending blend of wildflowers and other plants. Leaving 10 percent is sufficient, according to Landolt, and the insects will meanwhile move on to different flight patterns and life stages.

Benziger’s 2013 Sonoma County Cabernet Sauvignon ($20) is made with grapes from sustainably certified growers, who incorporate some of the techniques developed at the estate. This tongue-coating, plush Cab would be great with a well-crusted steak—but I just might pour a splash on the freshly tilled ground, for my honeybees.