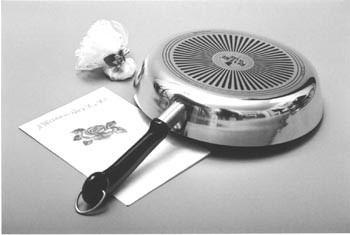 Ritual of the registry gets some new twists

COME WITH ME to a mystical long-ago land where all brides were virgins, all weddings were huge, and the bridal registries were exercises in prim, proper overindulgence. Twenty place settings of china were de rigueur, silverware sets came with fish knives and butter knives, and monogrammed table linens were chosen with the same care–and cost–as the bridal dress itself.

Admittedly, not everyone really wanted or could afford such a grand opening of their housekeeping endeavors. But the fantasy, pushed forth by bridal magazines, was there in the minds of many a bride-to-be. Now marriage is an entirely different ball game, and the ritual of the bridal registry has changed to match.

Not surprisingly, the computer age has made its mark on the matrimony business. Online registries, where newlyweds can set up their own Web page with lists of their choices, are becoming increasingly commonplace: everyone from Crate and Barrel to the old-school Bloomingdale’s is getting clickable. Target, a relative newcomer to the field of registries, took its Club Wedd online earlier this year, but it was way ahead of the pack back in 1995, when it started handing out scan guns to new couples and letting them loose in the store to pick-and-point their lists.

While the ease of picking items for the lists may lead to some bizarre choices (one Club Wedd couple put dog food on its list), online registries are the perfect choice for guests whose only spare time may be at 11:30 p.m., long after Bloomie’s has closed. They also greet the challenge of America’s increasingly mobile way of life, says Doris Nixon, director of educational services for the National Bridal Service. “Brides are more apt to not be living in their hometown,” says Nixon. “They’ve gone off to college and then moved again to find work, so many weddings have become cross-country affairs, and that can make local shopping a real hassle.”

The fast pace of the modern age has affected not only how registries are set up, but what goes into them as well. Socializing has gotten much more freewheeling, and the accouterments have changed accordingly. At Crate and Barrel, there are 100,000 couples registered at any given time, and many are switching their focus from gourmet cookware to serving ware, according to spokesperson Betty Kahn. “They’re getting beautiful serving platters to put their takeout on,” she says.

The most popular item at Crate and Barrel is the humble chip-and-dip plate. “For some reason every bride wants one. It’s a real basic entertaining tool,” says Kahn.

Another item that shows up repeatedly on bridal wish lists is the buffet plate, which didn’t even exist 40 years ago. It’s larger than a dinner plate and has a rim, making it easier to carry while you’re walking around looking for the wine. “It’s about casual entertaining,” Kahn says. “It’s a lot less pressure on the hostess as well as on the guest if everybody can just pick up their buffet plate and sit wherever they want in the living room.”

Even if new hostesses do want a more formal setup, they likely don’t have the room for it, either in the dining room–what dining room?–or in the kitchen. “More brides are looking for mugs; they don’t want the cup and saucer. They don’t want all those plates,” Kahn says. “You couldn’t have bread-and-butter and salad plates in small city apartments.”

BEYOND simple space considerations, newlyweds are much more savvy in the field of kitchen stuff. They have to be; they’re often on their own for much longer before they marry.

The median age of first marriage for women increased from 20.6 years in 1970 to 24.0 in 1990 (the median age of men showed a corresponding increase, from 22.5 years to 25.9). Add into that the folks coming into second or third marriages and the skyrocketing rate of premarital cohabitation, and you’ve got a lot of folks who are already fairly well stocked. Couples often look outside the kitchen altogether, into the booming field of garden or home-office equipment, or else they go for the upgrade.

Louise McCoy of McCoy’s Cookware, a small specialty store in Santa Rosa, observes a great deal of upgrading in the older clientele that her store attracts. These older brides, women over 30, are more choosy about their registry selections. “They are very clear about what they like,” she says. “They have more opinions and, based on their experiences, they know better what will be useful.”

Newer shoppers, she notes, often need to be guided through a selection process.

What many younger brides seem to know instinctively, say McCoy and other shopkeepers in the bridal-registry industry, is that not all of their guests can afford to be as generous as they might want to be with the Calphalon eight-piece set or Cuisinart blender. McCoy tries to meet this need with her careful selection of lower-priced gadgets and utensils, but admits that Target has a lock on the lower-price-tag items.

“They have good options for people with less money, a good range in price,” she says. “Young people are sensitive to these concerns.”