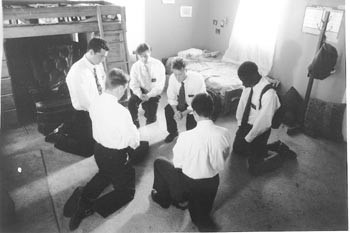 Missionary position: Mormon elders prepare to take on the world in God’s Army.

FIRST THINGS FIRST: I’m a cranky ex-Mormon. I’ve sat through my share of soggy-eyed speeches from returned missionaries. So I have to confess that I was tempted, on first viewing, to dismiss the Mormon feature film God’s Army as slick propaganda. But after considering the phenomenon of minority subcultures creating characters in their own image . . . well, even this skeptic was able to relax past the religion and enjoy the story within.

Written and directed by Mormon moviemaker Richard Dutcher, God’s Army rallies a stalwart band of earnest actors to a stirring “week in the life” film about LDS missionaries, the foot soldiers in the church’s effort to save the world–or, in this film, just L.A.

Against that backdrop of carnality and chaos, we meet Elder Allen (Matthew Brown), a tousle-headed newbie from Kansas, who fits into the missionary life as well as Dorothy did in Oz. Even his new home, a dorm-style apartment shared with other missionaries, is raucous and noisy, a kind of (un)Real World populated with an assortment of races and backgrounds and even a “bad seed” (Michael Buster), who reads anti-Mormon literature “to keep up with the other side.”

In this strange new world, Elder Allen finds a harsh sort of refuge in the sharp-eyed senior, Elder Dalton (played by Dutcher). He is Obi Wan to Allen’s Luke, Mr. Miyagi to Allen’s Karate Kid. Dalton is one of God’s great salespeople, but he can’t do everything for his protégé. When Allen bottoms out in a sleepless night of spiritual angst, triggered by a fellow elder’s defection, he must find his way alone.

Predictably, the morning after finds Allen a new man. He mysteriously develops his own sense of what to say and when. And he participates in a medical miracle that is audacious in its immediacy. This is the stuff of missionary legends, as are dramatic turnarounds by a hooker and a Latino Catholic father. It’s a whole body of oral folklore that Mormons relish in the retelling.

What the film does for non-Mormons is something else entirely. Diehard atheists and easily irritated individuals may want to stay away or take a sedative: you can pack a lot of prayer into 100 minutes. Still, many viewers will be fascinated by an inside look at the lives of these handsome young men, who are among the most easily identifiable in the religious landscape but are as misunderstood as nuns. They look so self-assured on those bikes, but inside, we learn, many are seething pits of self-doubt.

Missionary life isn’t all psychospiritual drama. In some of its missionary-meets-world material, God’s Army displays wry humor. One scene shows a bedraggled backyard with screaming kids and a shrill wife in the kitchen. Meanwhile, Elder Allen is telling his prospect about eternal family life (one of the key selling points of the LDS faith). “You mean I could be with my family forever?” asks the weary man. “Thanks, I don’t think I’m interested.”

Dutcher has experience in non-Mormon cinema, and it shows in the hip yet restrained use of lighting and music (in-house LDS documentaries use a lot of golden fog and swelling orchestral arrangements).

But it’s not just a matter of mastering the conventions of contemporary cinematography: Dutcher must receive credit for writing a respectable human drama, complete with ambivalent heroes and wrenching dilemmas. As the first filmmaker to present Mormons to the world, and to themselves, he has more than done his duty.