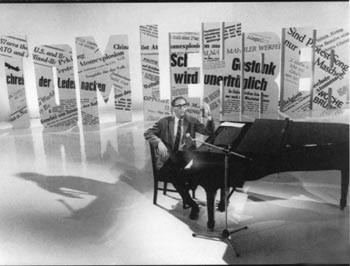 Slice of wry: Tom Lehrer, the master of social satire and topical humor.

HE HAD a dreadfully normal childhood. So how did Tom Lehrer–hailed by the All Music Guide as “one of comedy’s great paradoxes, a respected mathematics professor by day, [who] also ranked among the foremost song artists of the postwar period”–become the godfather of sick comedy?

That is one of life’s little mysteries, though the newly released anthology The Remains of Tom Lehrer (Rhino), a three-CD box set replete with a 78-page hardcover booklet, does a swell job of showcasing the skewed wit that 50 years ago laid the groundwork for such musical parodists as Mark Russell and Weird Al Yankovic.

Maybe it was all that Gilbert and Sullivan that Lehrer ingested during his childhood. Or perhaps it was the hours spent admiring the goofy on-screen antics of actor Danny Kaye. Or maybe his musical lunacy was just an outlet for a bright kid flexing his intellect.

For his part, Lehrer once joked about his scientific “attempt to prolong adolescence beyond all previous limits.”

By the time he entered Harvard University–at the tender age of 15–Lehrer already showed a proclivity for purple prose. Here’s a written sample (a long verse in the style of Gilbert and Sullivan) that he submitted to the Harvard admissions department: “I will leave movie thrillers/ And watch caterpillars/ Get born and pupated and larva’d/ And I’ll work like a slave/ And always behave/ And maybe I’ll get into Harva’d.”

The urbane singer, songwriter, and pianist was already well on his way to entertaining America with hilarious song satires about cannibalism (the corner druggist who kills his grandmother and sprinkles “just a little bit of her” on his ice cream sundaes), nuclear obliteration (sung as a campy cowboy anthem, of course), and obesity.

This ambitious tribute to the silly songster–feted in the popular 1980 musical Tomfoolery–contains Lehrer’s entire recorded output: 1953’s Songs by Tom Lehrer (recorded for $15 worth of studio time and eventually going on to sell 350,000 copies),1959’s More of Tom Lehrer, featuring “Poisoning Pigeons in the Park” and “The Masochism Tango”; 1959’s An Evening Wasted with Tom Lehrer; 1960’s Tom Lehrer Revisited; 1965’s That Was the Year That Was, which featured material written for the NBC news satire program of the same name, including his scandalous “Vatican Rag”; a series of tracks recorded in 1971­72 for The Electric Company kiddie show; and three new songs recorded last year with producer Ron Fisher.

Today, Lehrer remains the second most requested artist on the syndicated Dr. Demento Show–second only to Weird Al.

Lehrer himself–who has stayed largely out of the public eye for two decades, except for contributing an occasional song to NPR demigod Garrison Keillor’s show and conceding to a 1997 Internet chat (reprinted in the anthology’s booklet)–attributes the longevity of his work to the lack of sophistication in the mass media during his formative years.

“The songs spread slowly,” he told participants on the 1997 Internet chat, “like herpes rather than Ebola.”

What do you expect from the godfather of sick comedy?