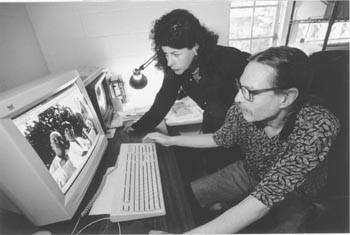 Wide world of art: Dozens of local artists plug into the vast audience available on the Internet with the help of an online art gallery run by Sonoma artist Katherine Spiering and her partner, David Heller.

Why are artists seeking their net worth in the unrefined world of cyberspace?

“MY FATHER was a black polka musician, my mother a Puerto Rican country-western singer who defected from France. Being politically naive, she didn’t know it wasn’t necessary. I was raised by an order of dyslexic nuns in Canada–consequently my confusion with God or Dog! . . . ‘You have one cobra eye, one tiger eye.’ These words whispered to me on the streets of Bombay 20 years ago began my art career. Or maybe not . . .”

Welcome to the vivid virtual reality of art on the Internet. This colorful back-story is an excerpt from the fantastical biography of Sonoma artist and virtual-art-gallery curator Katherine Spiering. Posted on her web site, it serves as Spiering’s counterculture jab at the traditional fine arts establishment–that world of swanky galleries hawking their artists with impressive and increasingly colorful bios.

“They want a shtick,” says the mischievous Spiering, shaking her black curls, dark eyes glinting. “They want some kind of bio that lends to the art world mystique–they want a hook. So this is my response.

“And some people actually believe it,” she adds. “Some people will come over and say, ‘Hey, I didn’t know your father was black!’ ”

Spiering, 43, who formerly co-published an arts magazine in Mendocino with her partner, David Heller, decided to go the Internet route six years ago. She and Heller moved to Sonoma and started a home-based business called Left Coast Art, which offers an online art gallery–one of the first in Northern California–plus an online arts magazine.

The web site, which can be found at leftcoastart.com, showcases the works of some 20 to 40 mainly local artists, including Spiering’s own pieces–a vibrant mix of pastel and acrylic with themes she describes as “urban neurotic.”

The site currently features the work of three sculptors, one potter, and various craftspersons, but the emphasis is on the fine arts. Computer users navigate the site by clicking their way through brief biographies of the artists and thumbnail sketches of their work.

“I’m an artist myself, but more of a facilitator,” explains Spiering, leaning against her desk in the white-walled studio and home office off the kitchen. The space is crammed with computers and multimedia equipment, with a tangle of wires beyond. The room also sports rows of books on technology and on art.

“I like discovering artists and promoting those I think are good,” continues Spiering, who often visits galleries in the real world in the hope of enticing artists online. Those who take her up on the offer pay a nominal fee upfront and then a 20 percent commission to Left Coast for any work sold.

“I like to keep rotating artists through the site, and I like them to keep refreshing their work,” says Spiering. “If an artist loses interest, I don’t like to keep them online.”

The arrangement works well for many artists who don’t want to pay high overheads and would rather circumvent the gallery and go directly to the people. “A lot of my friends won’t even deal with [traditional] galleries,” says Spiering. “By the time they paint it, frame it, schlep it, and schmooze, it’s all too much.”

Heller, 50, a jeans-clad, lanky computer whiz with a ponytail, says the pair decided to go cyber because of the low overhead. Regarding the magazine, he says, “It’s still publishing, but now I don’t have to pay a driver to distribute the magazine, or for a storage locker to hold paper, or printing costs.”

He says the Internet art gallery business–with its low overhead, unlimited access, and high traffic–is paying off, pulling in between 12,000 and 90,000 hits per month. “We’re linked to just about every search engine–and we get a lot of hits from Europe,” he says.

THE PARTNERS like the idea of reaching a larger, more global audience. “You’re walking a lot more people by an image as opposed to a traditional gallery,” Spiering says.

Another advantage to online art is its spontaneity. Spiering recalls an instance when a local man browsing the Web came upon one of her paintings and immediately purchased it as a centerpiece for a cocktail party he was throwing that night.

“The snobbery level is still there, but it’s not so prohibitive,” she adds. “As an online artist, you don’t have to have the proper background or education or be in the right circles, all the things that are traditionally attached to fine art. There’s definitely an underground movement. You can put your own art online if you can’t get into a gallery. It’s great for small-time artists and students.”

THANKS to broad-based sites such as NextMonet.com and Visualize.com, the work of virtually unknown artists shows up on computer screens around the world as big and bright as that of Degas or Picasso. Some web sites are even dedicated to, um, inferior images, such as The Gallery of Very Bad Art, at www.badart.com.

A growing number of artists are soloing–creating their own sites because the overhead isn’t as high and because the egalitarian notion of a virtual gallery appeals to them.

For some artists, the Web is more than a place to market their wares or network with colleagues. It is a liquid canvas for making art itself.

And in this virtual world the cyber artist can use digital media to interact with the user.

“The World Wide Web is a new world, and its artisans are using new tools to create within it. Technology has become a technique, and technique is the result of technology,” says Amy Stone, founder of the Museum of Web Art, an interactive art gallery in Brentwood, Calif., that is designed especially for the Web.

For artists who design their own web sites, the cost is usually minimal. But despite that, some sites don’t do well. Two Sonoma County­based online art galleries display defunct telephone numbers on their Web page.

“It does cost money to keep a gallery online,” Heller says. “Some artists use free sites, but then it gets objectionable when ads pop up. Another problem is if you get too popular and you have a server capacity that can’t handle it.”

Then too, not everyone likes virtual art galleries. At first they aroused significant opposition in the art community. “People weren’t into it,” says Spiering. “They wanted everything done traditionally.”

One of the complaints was about the loss of tactile experience: You can’t get up close and personal to online images. Another was that potential buyers were leery about spending money on something they could gauge only from their computer monitors.

One additional qualm is copyright ownership. “Some images carry digital watermarks, numbers embedded in the file–it puts [artists] on a better footing if they need to sue,” says Heller. “We limit the [on-screen] size to a printable 4-inch-by-4-inch [image] that’s not enlargeable.”

Even with all these difficulties, the majority of art galleries and university galleries are now online. The San Francisco Museum of Modern Art awarded its first SFMOMA Webby awards for excellence in online art in May.

“There’s a good future for Web art because it’s a visual medium in all aspects. There’s a lot of potential for artists,” says Spiering.

“It’s great for the collector too,” adds Heller with a grin. “You can see art at three in the morning in your pajamas!”