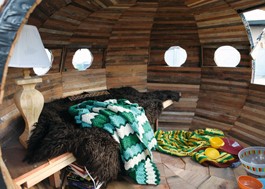 Di Rosa's latest gets smart on the zombie trend

Zombies may have jumped the shark a few years back, when Pride and Prejudice and Zombies began appearing in every chain bookstore across the country. But if part of art’s challenge and responsibility is to mirror a culture back on itself while revealing new and surprising depths, then “Zombie-Proof House,” a major group exhibition debuting at di Rosa this month, aims to do just that—with the undead.

Last February, di Rosa curator Robert Wuilfe told the Bohemian that while the title is somewhat of a joke, the message is a serious one. “Zombies keep popping up in political, economic and philosophical theory. There are certain zombie ideas that have been proven not to work, like trickle-down economics, and they’re these dead ideas but they won’t go away,” Wuilfe said.

Described as a meditation on anxiety and hope in a troubled time, the group exhibition includes sculpture, video, photography, interactive installations and an artist-designed web project.

Post-apocalyptic iconography abounds in pop culture these days, but the goal of the exhibit is to go beyond the surface by creating an environment wherein the viewer can reflect on recent, real crises like climate change and anti-immigrant rhetoric while locating the potential for finding a better way forward. With “Zombie Proof House,” maybe those flesh-eating creepers aren’t so played out after all.