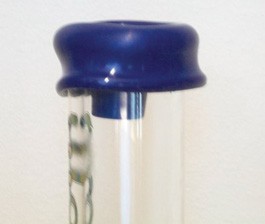 Introducing the water pipe condom and other stoner saviors

Even though the swine flu was spreading like crazy last year at Santa Barbara City College, 19-year-old Elliott Bush and his friends were still carelessly sharing hits from a bong. “I was really tired of being sick all the time,” he says, “so my mom and I decided to really go for this and make a change. It’s not good to share germs and everything.”

Bush, who lives with his parents in Tiburon, invented a product called Badabeez, a conical silicone barrier that folds over the mouthpiece of a water pipe to protect pot smokers from germs. It’s essentially a bong condom, free of toxic chemicals, which comes with a carrying case and fits snugly over almost any bong without compromising air pressure.

The Badabeez is also useful for avoiding the buzz kill of social tension. “When people have sicknesses or, like, if someone eats something really gross, you don’t wanna be, like, ‘Dude, that’s gross, I don’t want you to hit my piece because you’re sick,'” Bush explains. “You can just put a Badabeez on it and you’re good. It’s not awkward for you or that person.”

As a North Bay expert on solutions for the nuisances inherent in smoking pot, Bush agreed to a product-development quiz. I asked several friends who get down with the reefer to tell me what annoys them most when getting high in mixed company, and Bush, with his inventor’s mind, came up with product solutions on the spot.

Problem: Too much affection. “The ‘lecherous hippie hug’ is pretty bad,” says my friend, “Melissa,” a receptionist. “Where, like, when you’re done getting high, they stand up and kind of lean down and hug you, but really they’re just groping you. It sucks.”

Solution: Bush advises that since hippies hate leather, an Anti-Hippie Full-Body Leather Jumpsuit™ will keep the icky hugs away.

Problem: People trying to be Noam Chomsky. “I was high at the beach a while ago,” says “Bryce,” a carpenter, “and this one guy wouldn’t stop talking about really repetitive political stuff. He was presenting the fact that corporations control the world in a way where he truly felt no one had ever thought of that before.”

Solution: Bush, whose own father talks a lot about politics, envisions the Sarcastic-Retort Keychain™, with electronic buttons that trigger scathing phrases designed to stop the lecturing.

Problem: Freaks who make you watch messed-up movies. “A friend one time made me watch Gummo,” says “James,” an artist. “I don’t know why he wanted me to watch that movie. I started getting as high as I’d ever been, just going bonkers, during the scene where the guy keeps jiggling his nipple. It was horrible.”

Solution: Bush has never seen Gummo, but proposes the Marijuana Movie App™, which a pot smoker could consult on the iPhone. “It could ask, ‘What mood are you in?,’ and then you choose Happy, Sad, Angry, Funny”—and then it’d suggest appropriate films, says Bush.

Problem: Friends who are pushy about music. “I can’t tell you how many times people have attempted to convince me how good Television’s Marquee Moon is while high,” says “Standish Cosnahan,” a bartender. “It just sounds like an art-school guitarist’s attempt at rock and roll, poorly done.”

Solution: Bush is sneaky, conceiving of the Retaliatory Britney Spears iPod™. How it works: You plain-facedly agree to download the crappy music that’s forced on you to your iPod, but secretly touch a setting that uploads a ton of Britney Spears, Carrie Underwood and Jewel to their computer instead!

Problem: The general stoner ramble. “Last night,” complains “Kyle,” a residential caretaker, “our roommate was going off about the meaning of time and how the past and the future correlate to the present, and he kept talking about potential, but he wasn’t specific about anything. He kept staring at the wall and then laughing at himself.”

Solution: Bush suggests the Diff’rent Strokes Secret Speaker of Specificity™, deployed to get people off their tangents. At the touch of a button in one’s pocket, a speaker hidden in the wall emits a personalized version of “Whatchoo talkin’ ’bout, Willis?” “You could type a name in,” proposes Bush, “and then it’d be, like, ‘Whatchoo talkin’ ’bout, David?’ That’d be pretty funny. Like, dude, what are you saying?”

Badabeez can be found online at www.badabeez.com and at various local smoke shops.