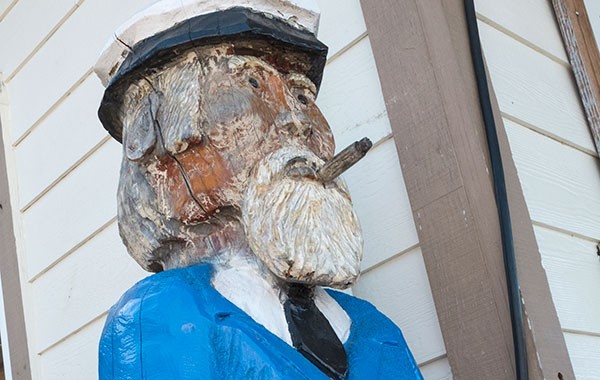 Why were Hitchcock's crows a bunch of killers?

Alfred Hitchcock made dozens of films over a half-century-plus movie career, but the one everyone talks about in Bodega Bay is, of course, The Birds, his 1963 spine-tingler about murderous birds which was filmed in town and provides a cultural signpost to visitors here.

The freaking crows are everywhere you look in Bodega Bay, and the Hitchcock-honoring Birds Café is where you go for chowder and fish tacos and to soak up the foggy scene in a properly Hitchcockian manner. Put on the voyeur lens and pan out: the restaurant was once a garage featured in the movie.

The Birds arrived on American screens at the end of what, viewed in retrospect, is an especially incredible period in Hitchcock’s career—just a few years removed from Rear Window, Vertigo, North by Northwest and Psycho.

For my money, The Birds stands up to those classics, as I still can remember watching the movie on the old black-and-white TV at grandma’s in the early 1970s and getting totally freaked out when the murderous black birds arrive on the scene, silently awaiting a victim to emerge from her home. Don’t do it, Tipi!

It’s bone-chilling stuff which makes me wonder: How might one experience other Hitchcockian vibes in Bodega Bay? And, what were those darn birds in The Birds so ticked off about, anyway? The short story from which the movie is drawn does not provide answers—but the answer to this cliffhanger question appears at the end of this essay.

To that first question, if you’re looking for some Vertigo vibes to your visit, that’s easy: trek up to Bodega Head and look down, down to the rocks and the crashing surf below. Inhale the salty air and belt out the theme from High Anxiety. Now take 39 careful steps away from the cliff, and grab some lunch at Fishetarian (p12).

If Psycho is your Hitchcock referent du jour, I suggest you settle in at a choice local hotel and check out the punk rock band from New York Norman Bates and the Showerheads on YouTube—since the wi-fi is free at the Bodega Inn. And if there’s a bargain hotel in town, the Bodega Inn is it, with rooms going for about a buck-fifty a night.

True, there are a couple of other hotels in Bodega Bay where guests who are not Rich and Strange are occasionally heard to scream their heads off when confronted with steep nightly rates that cut a vacation budget like a knife through a shower curtain. The good news is there’s lots of cheap camping options up here, or perhaps a priced-out visitor to Bodega Bay will be spotted in the Rear Window making tracks south for the affordable camp spots at Doran Park.

Well, hey then, are you a visitor to Bodega Bay planning on a North by Northwest adventure? You could do worse than get on one of the several open fishing boats that run out of Bodega Bay and, generally speaking, head in that direction to the fishing grounds, from whence salmon the size of a Lifeboat are occasionally landed. If it’s fire season, who knows, maybe you’ll get chased by a DC-10 spewing red algae (hint hint: the reference to red algae is not a red herring).

According to numerous Hitchcock scholars and scientists, the murderous crows in the film were inspired by actual events that took place in Monterey Bay in 1961, when dying, sooty shearwaters started to fly headlong into people’s houses. Totally freaked people out.

Scientists eventually determined that the birds were disoriented and distressed because they’d been poisoned by domoic acid—yes, the selfsame shellfish poison that has conspired to end or otherwise limit several recent Dungeness crab seasons—and cripple the Bodega crabbing fleet in the process.

So there’s The Birds, and then there’s The Blob. Hitchcock
didn’t direct the American classic The Blob, but there was an interesting piece in the Boston Globe a few years ago where the author argued that the two movies compare favorably insofar as they render the seemingly innocuous into something horrific—sort of like if a reality show star became president or something. And, yes, indeed: there’s a big and scary blob of warm water lurking off the California coast that has fisheries experts worried that next year’s crab season could be canceled again.