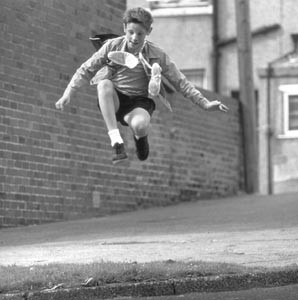 “I DANCED myself right out of the womb,” sings Marc Bolan in “Cosmic Dancer,” one of several T-Rex songs featured in Billy Elliot, a film with a soundtrack so infectious it nearly inspires dancing in the aisles. Ushers need not worry, however. Every toe-tapping, hip-swinging, over-the-top dance sequence in this working-class fable is quickly weighed down by a plot whose two left feet might be nicknamed “Predictability” and “Gracelessness.”

Directed by Brit theater veteran Stephen Daldry, Billy Elliot is the story of a coal-miner’s son who prefers ballet slippers to boxing gloves.

Newcomer Jamie Bell plays Billy, whose weekly boxing lesson is brightened by the unanticipated arrival of Mrs. Wilkinson (Julie Walters) and her gaggle of tutu-clad prancers. It’s 1984, Great Britain’s miners are on an extended strike, and the class’s rehearsal space has been co-opted by a soup kitchen.

Billy, who’s “crap” as far as fighting goes, becomes fascinated by the ballet and begins taking classes in secret. In Thatcher’s Britain, where rioting in the streets is as English as fish and chips, any boy in a leotard must certainly be a “poof.”

For a while, Billy’s widowed father and supermacho brother are too involved in the strike to question Billy’s whereabouts. While they’re fighting scabs and coppers, Billy is growing more confident of his ability to channel his emotions through his feet instead of his fists.

Mrs. Wilkinson, a salty old broad whose mouth seems inoperable without the requisite fag drooping from it, gives him encouragement and criticism in equal measure, pushing him so hard to excel that he nearly quits. It’s tough love, the only kind available since his mother’s death, and Billy rebels for a time, questioning both his own talent and his teacher’s motives. Before his doubts get too deeply rooted, his ruse is discovered and he finds himself fighting for the right to follow his bliss.

Initially, Billy’s dad forbids him to dance, even disregarding Mrs. Wilkinson’s impassioned plea that his progeny is a candidate for the Royal Ballet. Life is bad enough with no food on the table and no fuel for the fire, he roars, without his son prancing down the path to becoming a “pansy homosexual.”

Billy’s lessons end, but still he dances. He dances up the walls in his backyard. He dances in the streets in the snow. And, in the film’s most show-stopping sequence, he throws a whopping angst-driven tap-tantrum to the Jam’s infinitely catchy “Town Called Malice.” It is in scenes like this that the otherwise cliché-ridden film achieves a rollicking weightlessness, wholly owing to young Bell’s ebullient performance. Sadly, when the music stops the energy dips so dramatically that it rarely recovers.

Billy Elliot is nothing if not true to formula. After Poppa Elliot’s requisite change of heart comes the inevitable Flashdance-style audition scene–strangely, it is Billy’s most lackluster performance in the entire film.

If you’re looking for a dose of cinematic Prozac, or a few good dance scenes, or you want to see some great tunes from late-’80a rockers like the Clash set to film, Billy Elliot offers a modicum of entertainment. Otherwise, just buy the far-superior soundtrack and sit this one out.