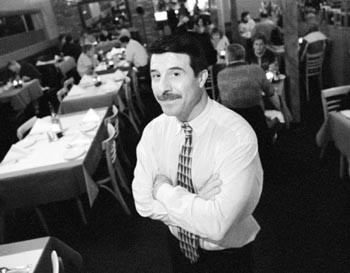 “HI, BOBBY, how ya doin’ this evening?” a bright-eyed young man in a yellow sweater leans across the counter to ask the bartender in the intimate, bustling bar at Roberto’s Italian restaurant. “It’s early yet,” snarls the surly bartender, not missing a beat. “I can still screw it up.”

The bartender is one tough biscotti. The antithesis of Tom Cruise in Cocktail, this keenly observant, pokerfaced chap in his middle years is obviously just as much a draw as the buff movie star, since the bar is crammed with adoring (though likely tipsy) clients. These folks are almost all “old-time” Santa Rosans, and almost all regulars.

The colorful cast of characters resembles a soap opera. One such regular is a thick-set, ruddy-faced, 60-something bleached blonde in a crisp white shirt, lots of eye makeup, and some serious jewelry (we’ll call her Ginny). She’s actually a transplant from New York City.

Ginny hoists a Manhattan (very apt), wastes no time in offering anyone within earshot minute details about herself, and grumbles loudly about the lack of night life in Santa Rosa and the abundance of “rack heads.”

Meanwhile, a 20-something Ginny-in-training fiddles with her tube top to get maximum cleavage before lurching over the bar to order two Captain ‘n’ cokes for herself and her awestruck boyfriend.

Deadpan Bobby continues mixing killer (and cheap!) cocktails and entertaining patrons with constant patter even more acrid than his vodka martinis. “Hey, who stole my Stoli?” he yells at a passing harried server, who almost drops his tray in alarm.

One guy, a would-be chef, is rhapsodizing about the swordfish special of the evening. “It was cooked medium-well so it wasn’t mushy in the middle. I hate mushy in the middle,” he’s telling hard-drinkin’ Ginny, who nods vaguely between slugs. “And the spinach was clean. No grit. I hate grit.”

THE MAIN dining area in this busy restaurant exudes casual warmth and homeyness, with its wall of small booths and rows of little tables set with candles and red linen tablecloths. There’s a second dining room through a door behind the bar, but it’s sparsely decorated, and the atmosphere in there is, quite frankly, grim. So hang out in the bar and people-watch till you can snag a table in the main area.

Which brings us to the food. Roberto’s is the kind of reliable, family-run casual place that turns out consistently good pastas, soups, salads, and specials. The menu features such traditional trattoria favorites as carpaccio ($7.95), steamed clams ($8.95), veal piccata ($17.95), and chicken Milanese ($16.50). Plus a large array of pasta dishes.

The calamari de la casa ($8.95) is expertly deep-fried, but spoiled by tossing the crispy morsels in a semi-spicy tomato-basil sauce. The overall effect is soggy.

The shiitake mushroom ravioli ($7.95/$14.95) in a light pesto and garlic sauce is much better. It has layers of earthy and creamy flavor–deep and smooth–yet it’s light and not overly filling. The pine nuts flecked over the top give added oomph.

All dinners are served with soup or salad–and both are great. The salad consists of crunchy bitter greens in a light vinaigrette, and the soup tonight is a smoky-flavored minestrone swimming with cabbage and plump white beans.

Polenta pomodoro ($10.95) is served soft and is stick-to-the-ribs comforting in its big bowl, while chicken Marsala ($16.50) with mushrooms and Marsala wine is light (not creamy) and delicious.

Bigger appetites may prefer the New York steak al Pepe ($18.95), a firm cut of meat in an ultra-rich green peppercorn and brandy sauce, served with piped mashed potatoes and garden-fresh carrots and chard.

Don’t miss the house-made tiramisu ($4.95) for dessert. It’s a classic: ladyfingers, mascarpone cheese, whipped cream, ground espresso beans, chunks of chocolate, and a hint of liqueur–it’s all in there.

The wine list is comprehensive, with mid-priced bottles, plus some more pricy yummies like 1997 St. Francis Old Vines Zinfandel ($42). Service is impressive; the staff seem rushed off their feet but manage to retain a friendly, attentive composure.

As we leave, we notice that Ginny now has spaghetti sauce stains down the front of her white shirt, but is as bubbly as ever, and that the bartender is still in top form. “I’m gonna kill somebody tonight,” he growls, slapping a maraschino cherry onto an ice cream sundae held out by an apologetic waiter. “And you might as well be the one!”

We can’t wait for the next installment.