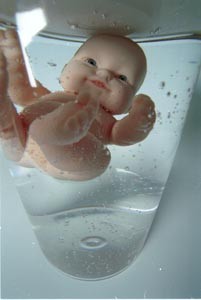 A Colorado couple ups the ante on genetic engineering of children

ANYONE WHO has read Aldous Huxley’s Brave New World will remember the Embryo Store, just down the corridor from the Social Predestination Room of the Central London Hatchery and Conditioning Center. There, row upon row and gallery upon gallery of embryo-filled glass jars recede into the distance, awaiting classification as intellectual Alphas or brainless Gammas.

But Huxley’s 1932 vision inched a little closer recently with the news that a Colorado couple designed a baby using genetic tests–a baby who would, in turn, help save their desperately ill daughter. Overshadowed by the fast-approaching presidential elections, this news has passed unnoticed in many quarters, but it provides a chilling backdrop to the political season for those who understand its implications.

Jack and Lisa Nash thought 6-year-old daughter Molly had few clinical options when she was born with Fanconi’s anemia, an inherited bone-marrow deficiency. The genetic disorder disrupts bone-marrow cell production, compromising the immune system and often leading to leukemia. Sufferers rarely survive beyond the age of 7 without a bone marrow transplant. Molly was ill and her parents knew it.

Eager to have more children, but reluctant to risk passing on the disorder, the couple used in vitro fertilization, testing embryos for Fanconi’s anemia before any were implanted. But while doing so, researchers also tested embryos for compatibility with Molly’s cells. Late last year, Jack and Lisa were the proud parents of 15 embryos, of which two were free from Molly’s condition and also compatible with her cells.

Implantation was successful, and a baby was born Aug. 29, after the couple’s fourth attempt at in vitro fertilization. Doctors infused Molly’s circulatory system with cells collected from the baby’s umbilical cord, a tissue rich in the healthy stem cells that Molly needed. Now free from the effects of Fanconi’s anemia, Molly is expected to survive, and her prognosis is good.

THIS example of medical intervention should worry us all. It raises many questions about the capricious use of embryo selection to satisfy the preferences of parents. To many, this case sets a precedent for screening embryos, using the information gained, and making a selection on the basis of particular traits. For instance, will parents choose embryos with a decreased chance of dyslexia, or select against embryos with genetic markers for obesity or substance abuse? Will they choose against an embryo with a greater chance of developing Alzheimer’s disease in its old age? If scientists discover genetic markers for homosexuality, will they use genetic embryo screening to select against that trait? What about children with below-average intelligence? What about children with annoying speech impediments?

According to press reports, the couple decided on the name Adam for their new son, a choice with enough biblical symbolism to satisfy just about everyone. But the question is, Why bother naming the child at all? Why not just keep him in the garage with the lawn fertilizer and the jump cables? Just in case he’s needed again. Survival of the fittest. It’s instinctive. He’ll do fine.

To others, the Nash case isn’t an indication of worse to come.

“I just don’t see how this particular case really adds anything new to the ethical debate,” says John Bickle, associate professor and head of the philosophy department at the University of Cincinnati. “There’s nothing particularly new about this technology. The ethical issues we start raising now are what constitutes a capricious choice.”

The selection of an embryo that might provide a medical benefit is not a capricious choice, Bickle says, and doesn’t set any precedents. Anyone who supports contraceptive devices but opposes embryo screening has some explaining to do, he says.

But according to an Oct. 4 Reuters news report, Professor Jacques Montagut, a pioneer of in vitro fertilization, told the newspaper Le Parisien that the case set a dangerous precedent if the child were born to save Molly.

“It would inaugurate a new form of biological slavery,” he says.

Along similar lines, a Scottish couple is planning to use the European Convention of Human Rights to win the right to choose the gender of their next child. Parents to four sons, the Mastersons lost their only daughter after an explosion in their home, and now they want to use new laws to select only female embryos for in vitro fertilization.

This is a question no one is equipped to answer, but someone will be charged with the responsibility of doing so. To many, these are the first tentative steps onto the slippery slope of bioethics, a slope characterized not by what we can do but by what we should do.

With the Human Genome Project nearing completion, genetic information soon will become a commodity, and commodities can be both used and abused. Scientists finally will be in a position to quantify and label the genetic components of personality traits. For instance, at this time we know human intelligence is determined by nature and nurture in roughly equal parts, but we can neither locate nor quantify either portion. If scientists can pinpoint the genes that determine the genetic fraction of intelligence, we will all be faced with the question of whether or not lower-than-average intelligence is a sufficient handicap on which to base embryo selection.

And as long as Congress continues to debate the use of embryo stem cells, even from discarded embryos, research on Parkinson’s disease and other neurodegenerative disorders will remain stalled. Meanwhile, it’s only a matter of time before doctors take another step onto the slippery slope of bioethics, allowing embryo screening for less deserving reasons than those presented by Molly and her family.

And maybe its also only a matter of time until we can all just place a request down at the Embryo Store and pick it up when it’s ready.