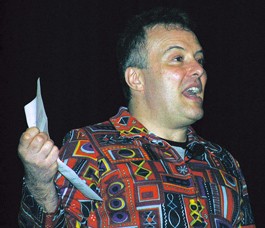 In 1989, a 13-year-old kid approached Jello Biafra, the singer of Dead Kennedys, at the River Theatre in Guerneville. It was dark inside the show, but the young fan recognized his idol through a sea of purple Mohawks and leather jackets, his mind racing to all the hours he’d spent listening to Dead Kennedys cassettes on his Walkman, all the lyrics he’d pored over and memorized. “Excuse me, Mr. Biafra,” he meekly opened, “but I’d just like to say that I love your music, and, uh, the Dead Kennedys had a real huge impact on me . . .”

The kid was crushed. How could it be that this man who’d written some of the most scathing indictments of capitalism, who’d made fun of money-grubbing new wave bands, who’d assembled brilliantly off-kilter album booklet collages and who’d taken the entire American ideal of consumerism to task as the heart and soul of one of the most important punk bands in the world—how could he so denigrate a genuine expression of admiration by telling the kid to buy some crap?

It wasn’t until a decade later that the resentment among the broken-up Dead Kennedys was unveiled not only to that kid—yeah, it was me—but to the world at large in an ugly series of legal action and allegations between Biafra and East Bay Ray, D. H. Peligro and Klaus Flouride, the other three ex-members of the band. Biafra had been holding out on royalties, the ex-members charged. He hadn’t advertised the albums enough in major music magazines. He hadn’t allowed lucrative licensing of Dead Kennedys’ music. He had mismanaged the band’s catalogue, they said. Most absurdly, they wanted to tour as “Dead Kennedys” with a different singer.

The three ex-members eventually won their six-year lawsuit, in 2004, with Dexter Holland from the Offspring and Howie Klein from Warner Brothers as “expert witnesses.” I read the newspaper article, complete with photos of the band in three-piece suits, and a little piece of idealism inside of me was crushed all over again. I felt bad for Jello Biafra.

I recently called Biafra to dispel widespread rumors that he’d be singing with Dead Kennedys when the band, with current stand-in vocalist Skip Greer, appears at the Harmony Festival in Santa Rosa on June 12. He fields similar calls virtually every time the band plays without him, and by now rumors of his singing for the band are as constant as the chances of it ever happening are impossible.

“It’s the great heartbreak of my life,” Biafra says by phone from his San Francisco house, reflecting on his relationship with his former band mates. “To have something that obviously means way more to me than it does to them, just to be dumbed-down and marred like this. It’s like spray-painting a McDonald’s logo on the Mona Lisa or something.”

Most poignant is the knowledge of how much a real Dead Kennedys reunion would mean to fans. “One band that reformed that I swore I’d never go see but did was the Stooges,” he says. “And I had a great time! It was really good, powerful stuff. It wasn’t lost on me how much that show meant to everybody, and what a real Dead Kennedys show, even at a place like the Warfield, would mean to people.”

Biafra says he’s willing to do it—with conditions. The other three members would have to return the album rights to Alternative Tentacles, Biafra’s label, for starters. They’d have to fire their management and booking agent, and they’d have to stop licensing songs for commercial purposes. “And,” he adds, “Ray would be required to regrow the mullet he insisted on having on our last tour in 1985. No mullet, no reunion!

“It would have to be, in other words, not just the same guys, but the real spirit of the band,” Biafra continues, “where we rehearse until we sound as good as we ever did and work our butts off onstage and mean what the lyrics are saying! That’s why they sued me in the first place, because I stuck to the principles of the band. I didn’t want to be in a Levi’s commercial, let alone wake up several years later and find out that a cover version of a song I wrote was used as the background music to a brutal rape scene in one of the Grindhouse movies.

“That’s how low things have gone with them. I mean, they may claim they’re progressives, but in my opinion they think and behave like Republicans—’Money über alles, and it doesn’t matter who gets hurt as long as there’s more cash for me.’ That whole attitude is exactly what the real Dead Kennedys always stood against.”

Biafra, who’s currently finishing a new album with members of Faith No More and Victims Family at Prairie Sun in Cotati, has kept busy with spoken-word and music projects since his most famous band split up; he’s never thought about forming a new backing band and performing Dead Kennedys songs. (“I don’t want to stoop to that,” he says. “They may be putrid human beings, but I would not be comfortable calling a band Dead Kennedys unless Ray and Klaus and Peligro were in it.”)

And yet through the band’s new partnership agreement, Biafra says he actually helps pay for the Dead Kennedys’ concerts with the “scab” singer while receiving no portion of the proceeds. The albums, some re-released without their iconic booklets by artist Winston Smith, are another thorn. “Instead of disappearing into eBay collectordom, where nobody could find the material, I paid out of my own pocket to keep all Dead Kennedys albums in print for two decades, and made sure everything was paid in full and on time to keep them fed,” Biafra says. “Yes, there was an accounting error on our part eventually. When we found—not they—when we found the cause of it, we paid them in full, and then they sued, charging conspiracy.

“Another thing that galls me is the way they were able to bamboozle the jury into awarding them tens of thousands of dollars in damages for ‘lack of promotion,’ just because they weren’t regularly advertised in Rolling Stone, Spin and Billboard, or in regular rotation on MTV—for 15 straight years after the band broke up! Even though by then, they were claiming they wrote ‘MTV Get Off the Air,’ as well!”

Biafra reiterates that he won’t be singing with the band in Santa Rosa, instead busying himself with “trying to protect the long-term value and integrity of Dead Kennedys’ music and vision,” he sighs. “The brains and heart and soul of the operation has to speak up, no matter how often I get threatened by their legal people.”