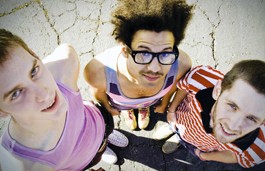 Rock Among the Vineyards

Napa has always been a dead scene for teens. So what's with the sudden explosion of bands?

Last year, Jakey Lee was frustrated with Napa. All of his skater friends had been harassed by the cops so often that they had stopped skating and just did drugs instead. All of his musician friends had declared Napa a dead town and had moved away or given up. All of the house parties his band played had started getting busted up after the first song.

On the cusp of leaving Napa behind, Lee, just 21 and with plane ticket in hand, made a decision. He was going to help Napa get a scene. His band, Body or Brain, with Robert Bradley, 23, and Taylor Hight, 22, was going to make it. Their lives would become one giant thrust toward putting Napa on the map.

Olivia Everett, who’s organizing a Battle of the Bands at the Napa Valley Opera House on June 12, provides a telling barometer of the shift. “We had 20 bands apply, with only eight slots, and we still have a lot of great bands asking if the selections have been made,” she says. “In total, we’ve had something like 25 bands express interest, and this for a town that, according to itself, constantly complains that there’s nothing going on. I think they’ve just proven themselves wrong.”

On a recent Thursday night, over 150 kids stand between the pool tables at Bilco’s Billiards to catch two local bands, Defying Truth and the Helen Kellers. There are all types of people: guys with dyed hair, blondes in jeans and college sweatshirts, a girl in plaid tights with bright Converse sneakers and a Police T-shirt. The vibe is communal, clique-free and mostly mellow, until the show ends with Helen Kellers frontman Ryan Rushworth diving backward over a brass railing onto a table, various audience members commandeering the microphone, band members switching instruments and the drum set splaying apart while the crowd goes nuts.

Putting their heads together afterward, Napa musicians Brian McKee, Dylan Varner and Mikey Rhinehart, all under 20, join Bradley and Lee to make a list of current Napa Valley bands. They give up after naming 17: Body or Brain, Cloverleaf Drive, Defying Truth, the Subtones, Ove the Garden, Viridian City, the Helen Kellers, Magnanimous, Rumblefish, In These Walls, Planets, Rude Intoxicant, Brazen Bull, Thy Winter Shadow, Serf and James, Nana de Carlo and the Aftermath. “The cool thing is that every band has a different style,” Rhinehart says. “No two bands sound the same.”

In addition to nightlife, the newfound opportunities for bands, they say, has helped curb drug use, which by anyone’s measure is widespread. Pot and speed make the usual rounds, but lately Ecstacy has been the thing in Napa. “I’m not gonna lie,” Varner says, “I saw someone earlier tonight on E who I was talking to. It’s not as big as it was a month ago, but it’s still popular.”

Drugs are easy to get in Napa; I’m given a run-down of where to buy along with somber stories about recent overdoses. “But then these shows started popping up,” McKee adds, “and it gave kids something to do.”

Melody Harris, the girl in the plaid tights, comes by and offers a copy of Napkin News, her zine dedicated to the Napa scene. It’s a photocopied, folded sheet straight out of the mid-’90s, and it contains upcoming shows, interviews, musings and news about Napa bands and venues. “Bands have always been around,” she says, “but they didn’t start coming out of the woodwork until recently because they had no place to play, and that’s all changing. Plus, if you are a teen in Napa, really, what else are you gonna do? This isn’t a ‘youth-friendly’ town, but that’s something else that’s changing.”

What about skating? Doesn’t Napa have a skatepark? “Skaters are hated by adults in this town,” McKee says. “Cops just look for a chance to bust young people. If it doesn’t have to do with wineries making money, they don’t want to have anything to do with it.” Varner agrees: “Once you get your license in Napa, you stop skating.”

Bradley chimes in. “Once you get your license in Napa,” he says, “you leave Napa.”

Later, Lee and Bradley walk me down to the skatepark, a half-block concrete area that’s dimly lit and scattered with litter, next to the city’s sanitation-treatment building. No one’s out tonight at all, other than the occasional car that drives by and yells unintelligible threats at us out the window. We stop at one point, in the middle of downtown at 11pm, and the complete and utter silence is stunning.

“Hear that?” Bradley says. “That’s the sound of nightlife in Napa.”

Lauren Roll, who books the bands at Bilco’s, started inviting younger bands almost as a community service. “Unfortunately, there is absolutely nothing for anyone under the age of 18—even 21 and younger; there’s pretty much nothing for you to do at nighttime,” she says. “I’ve been lucky enough to get a lot of the younger crew coming in, anywhere from 14 to 18, that have some really good music going on.”

Across town and down a long driveway in Napa’s industrial area, past granite and sign shops, is Rockzilla. Named for the myriad rock-climbing walls that fill the 25-foot-high warehouse, the title is also fitting for the band playing. When I walk in, a singer in a basketball jersey is screaming his way through a metal-ska version of Mac Dre’s hyphy anthem “Thizzle Dance,” while three boys stomp around the blue rock-climbing pad in front of the band: one in a spiked leather jacket, one in tie-dye, one shirtless.

The band finish playing, and the kid in the leather jacket comes by to try and sell me the band’s demo, a Sharpied CD-R with no case for five bucks. Audience members try their hand at climbing the rock walls while the next band’s guitarist warms up in a series of technically proficient metal solos that sound like a hundred fax machines arguing with each other. It takes them about 40 minutes to officially start playing, when an amp is finally delivered via an overheated car.

As at Bilco’s the week before, it seems the crowd at Rockzilla rejects class division or social status; everyone seems to get along under the banner of something exciting actually happening in Napa. Along with the blend of cliques here is a noticeable integration of age and race. There are parents, veteran rockers, teenagers and small kindergarteners—and there’s also more black and Latino people here than at any non-hip-hop show over the hill in Sonoma County.

Lee, who is half-black, adopted and raised in a mobile home park, is an active proponent of the “real” Napa and an outspoken critic of Napa’s renown for wine and wine only. He tells of writing to guitarist Chris Walla from Death Cab for Cutie, and receiving a response that still irks him: “How’s Napa?” Walla wrote. “Go taste some wine for me.”

As if funneling this frustration into their instruments, Body or Brain’s performances are mind-blowing demonstrations of the limber gymnastics of youth. Lee plays riffs on the electric guitar with his bare hands, no pick, and he moves like a clock spring that’s frantically uncoiling. He jumps, kicks, slings the guitar around his back, tap-dances, does the splits and moonwalks, all while playing the guitar and not missing a note.

The band’s new EP, Second Star to the Right, could’ve been a dour complaint reflecting the nothingness for kids in Napa. Instead, it creates a whole new Napa, a vibrant, exciting Napa that’s full of energy and tight hooks, a Napa where everyone’s invited to the party. When “It’s Just Like Magic” was played on Live 105 recently, DJ Aaron Axelsen called them an “exciting new local band from the 707.”

Getting played on Live 105 and headlining in San Francisco—50 of their fans drove down last month for a club date—is only the beginning of Body or Brain’s determined promotion plan for Napa. “What’s gonna change this town’s reputation is a band breaking out from here,” Lee confidently predicts. “There’ve been venues and places to play, but honestly, nothing’s gonna last until a band breaks out of here.”