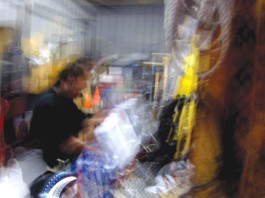 TROI may cause dizziness at noise-rock convergence in Sebastopol

Hit singles, perfect hair, million-dollar production, glossy spreads. Who needs it! Making a name for oneself in music is sometimes such a daunting prospect that the more attractive option is to go in the completely opposite direction. Take the bands of traveling troublemakers like the Reatards and the Mummies, who gained notoriety for being thrown out of clubs simply for being utterly annoying and antagonizing. If you can’t beat ’em, beat ’em.

Last month, an intentionally abrasive noise band called TROI—a moniker shortened from their former name, Drinking Coffee from Counselor Troi’s Head—joined the select group of bands so loud and irritating as to warrant being thrown out of a venue in the middle of their set. At a small show at Unity Music on Piner Road in Santa Rosa, after 15 minutes of noise so gut-churning that the guitarist himself had to take a break to step outside and vomit in the parking lot and some questionable activity with wooden stools, the management turned the lights on. The band, cut short. The finger, pointing toward the door.

It was probably just an awkward billing, as freely improvised, gut-churning noise actually does have a local following. Just look at the lineup this weekend at the Odd Fellows’ Hall in Sebastopol, hosted by tireless West County curator A DJ N Front of the Coffee Shop. Billed simply as “Party & Lounge Art and Music Show,” the multi-genre evening features Moira Scar, a transvestite experimental band made of Roxy Monoxide and LuLu LaCorpse, who live in a barn with a bunch of feral cats by Santa Rosa Creek; some “downtempo chillness” from Gabby La La and Zach Morris; acoustic groove-soul from Kyle Williams; hellfire and brimstone from Shrew Florist; prog-rock locals PATHOS; the downtempo electronic sounds of OKnotOK; and many, many more, including the return of TROI. It’s easily the weirdest thing going on in West County this weekend, and that’s saying a lot. Witness the madness on Friday, Dec. 11, at the Odd Fellows’ Hall. 195 N. Main St., Sebastopol. 6pm. $7. www.myspace.com/indiemixn.