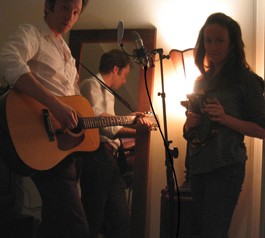 The Harlequin Party batter the rowboats of rock noir

T hese days, the popular model for an alt-rock lineup is either a stark guy-girl duo, like the White Stripes, or a multi-instrumental collective, like the Arcade Fire. These current models are opposites, but for Sonoma’s new rock duo the Harlequin Party, the two models coexist.

“I think we have both styles in us, and more,” says Sasha Papadin of his first project, which includes wife Lauren Papadin, since his club-touring band the Val Papadins dissolved last year. “The big picture,” Sasha says of Harlequin Party, “is to make an anti-band—the two of us at its core, with guests coming and going.” The newlywed couple, who refer to their rattling carnival sound as “rock noir,” plan to add horns, percussion, backup singers and perhaps even dancers when they start gigging to support their new disc, Fever Dreams.

Lauren enjoys that “the simplicity of this current duo is lovely and virtually carefree,” but favors opening the duo into a loose collective, which Sasha says will “create a medium where we can play acoustic shows or big band shows and not feel like we’re betraying some code.”

That’s the performance plan, but Fever Dreams is virtually a solo recording by Sasha, with slight vocal and production contributions from Lauren and Sasha’s brother William. Still, the need for a larger band is implied by multiple keyboard and guitar parts (which Lauren shares live), by the strange mutating circus feel of the music and by charming touches like group vocals that recall a gaggle of drunks in the distance.

“I focused on making the record right and chose to worry about live arrangements later,” Papadin says of converting solo work into a group dynamic. “I gave myself advance permission, when recording, to not have to play these songs the same way live—that felt like freedom.” In fact, changing the songs live is the whole point, he says, noting how favorites like the Walkmen and Bob Dylan “completely deconstruct their songs at each show. As a fan, that’s the only thing that brings me back.”

The content of Fever Dreams is complex enough to invite such reinvention. A general sonic thread links Harlequin Party to artists like Nick Cave, David Bowie, Leonard Cohen, Tom Waits and Ennio Morricone, where a dreamy European sense of keyboard atmospherics collides with a rougher American sense of driving guitar. In the middle of the track “Los Angeles,” for example, a churning, savage Bo Diddley beat is interrupted by a wandering piano abstraction before the chorus reappears.

Papadin is genuinely incredulous when asked why the songs are so dark. “Are they dark? They sound cheery to me,” he retorts, later admitting that there’s “something sinister bubbling below the surface, like the dark undercurrent of a calm ocean. If you’re honest with the undercurrent, it comes out feeling very human, cleansed and worked-out.”

“Some of the songs are dark,” Lauren adds, “but Sasha is not. That paradox gives the music such a uniquely beautiful sound.”

Indeed, there is more to Papadin than “rock noir” band music. He also composes soundtracks, recently creating scene segues for a staging of Lolita by Intertwined Productions at the Sonoma Community Center. Director Frances Hall had seen his indie film Prelude at the Sonoma Valley Film Festival in 2004, and was “reminded a lot of David Lynch. Sasha is kind of ethereal, but pretty haunting.”

Hall says that “I definitely want to use him again,” and her recommendation shows that Papadin’s music can thrive far beyond a solo or duo format. “He gets over [his own work] soon,” Lauren says of her husband’s restless creativity, adding that she does “everything I can to keep him interested in these songs before moving on to the next project.” But Papadin doesn’t seem to move on from his material so much as move within it.

“These songs are like battered rowboats,” he says, “that are going to behave and feel different based on the weather, and on who or how many people are paddling.”