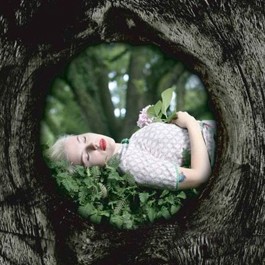 Anywhere She Lays Her Head

Scarlett Johansson is a lucky woman when it comes to Anywhere I Lay My Head, her debut album out next week. It’s hard to go wrong with songs written by one of the most brilliant songwriters of the age, Tom Waits, and add to the mix the production team of Dave Sitek (TV on the Radio) and Nick Zinner (Yeah Yeah Yeahs), with backing vocals by David Bowie, and there’s a recipe for brilliance. But the right ingredients don’t always add up. Opening track “Fawn” is the song a lonely organist in a Midwest mall might play while awaiting customers who will never arrive. “Falling Down,” the first single—a pretty, My Bloody Valentine&–esque track—highlights Johansson’s smoky vocals and would have been right at home on the Lost in Translation soundtrack; on “Anywhere I Lay My Head,” the actress emulates the tremolo vocal styling of Elizabeth Fraser of the Cocteau Twins. But on “Fannin Street,” Johansson sounds like she was drugged before the recording session and then forced to sing through a broken vacuum cleaner tube, and the disco-infused vibe of “I Don’t Want to Grow Up” would work as the opening theme to a bad German variety show. If you pretend it’s not Johansson singing, and just some unknown lovely girl singer, it’s better.—Leilani Clark

Johansson cannot sing in tune at all. It’s intriguing. One, she didn’t autotune her vocals, instead doubling them up to constantly clash with each other in pitch. Two, it sounds like Sinéad O’Connor or This Mortal Coil or some other early 4AD stuff where the singers purr like witches luring you into their vat of human flesh. And three, if it wasn’t Tom Waits’ material, the album would actually be better. Johansson doesn’t “get into” the feeling of the songs; it’s like she learned them five minutes before recording them and delivered a cold reading with no passion at all. She’s gotten a lot of cred for this project, but overwhelmingly, she comes off as not an actual Tom Waits fan at all. Too bad.—Gabe Meline

In her films, Johansson is often cast as a muse for middle-aged men—she’s the Viagra of filmdom. As a singer, however, excusing the metaphor, she falls flat. The ingénue and her producers have chosen songs from throughout Waits’ career, making it a little disconcerting to hear a 24-year-old sing “I Don’t Wanna Grow Up.” The songs Waits writes are gems of lyrical brilliance, so why are Scarlett’s vocals so awash in reverb? Sitek has said he was trying for a “Tinkerbell on cough syrup” vibe, but we love our neighbor’s voice—why would we want cough syrup?—Brian Griffith

Anywhere I Lay My Head is out in stores next Tuesday. Tom Waits is touring this summer, hell yeah; for dates, see www.tomwaits.com.