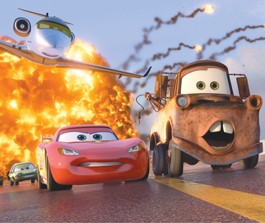 No checkered flag for low-on-gas 'Cars 2'

Like selling stocks, making films is a division of gambling, and every streak ends at some point. The sad news about Cars 2 is mitigated by the hope that it might just be a temporary slump.

Cars 2 is a Bond parody. And it’s the stale kind, with a bumpkin mistaken for a secret agent. Agent Finn McMissile (a sentient Aston Martin voiced by Michael Caine) is on the track of a mysterious monocled Zundapp Janus known as Professor Z. Events lure Lightning McQueen (Owen Wilson) into a race demonstrating alternative fuels in Paris, London and Tokyo; tagging along is his gauche tow-truck buddy from Radiator Springs. Tow Mater attracts the attention of McMissile’s assistant Holley Shiftwell (Emily Mortimer), as curvy as a Miata, who remains as subordinate as the 007 girls of three decades ago.

It’s not that Pixar’s new film is really bad; it’s just that it’s cute and relentless, and paced to tickle five-year-olds. The comedy, on the other hand, is gear-headed, with the strange gauge of British Standard Whitworth tools being essential to a mystery.

The heart of the matter—the class-crossing friendship between a yokel and a celebrity—is synthetic as possible. The blame has to go to the comedy stylings of Larry the Cable Guy, Tow Mater’s voice. Also, there’s a new emphasis on bathroom humor. Pixar usually had too much class to go there.

Admittedly, the Ginza scenes are more of an eyeful than the toy-Tokyo Gaspar