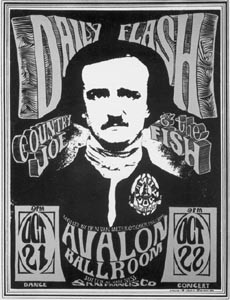 FLASHBACK TO 1967–the waning days of the Summer of Love. America is yet to limp away from its “conflict” in the steamy rice paddies of Southeast Asia. Alabama Gov. Lurleen Wallace tries to foil federal court attempts to accelerate school desegregation. And a young San Francisco Giants captain named Willie Mays reminisces in local newspapers about last year’s pressure-cooker finish and makes predictions for the close of the ’67 baseball season.

Meanwhile, surfer boys and beach bunnies frolicking in the hot summer sun this Labor Day can forget their troubles and flip through the pages of Life magazine, past the exposé on Costa Nostra mob bosses and fashion notes on miniskirts to the cover story about “The Great Poster Wave.”

Splashed across the pages of the Sept. 1 issue is a kaleidoscope of vibrating color, chronicling the latest national hang-up: poster art. Life scorns the phenomenon as “expendable art . . . selling more than 1 million copies a week and gobbled up by avid maniacs who apparently abhor a void.”

Two of those artists–Kelley and Mouse, who collaborated on dozens of posters, including works for the Grateful Dead–now reside in Sonoma County.

Their work will speak to rock-poster collectors Feb. 5 at the Petaluma Masonic Hall.

Interest in poster art is running high these days (even first- and second-generation reproductions of psychedelic posters can command hundreds of dollars from collectors). But in the ’60s, West Coast artists seldom earned more than $100 for their designs, whereas New York-based graphic designer Peter Max and a few others reaped a commercial windfall.

In fact, Kelley and Mouse, along with their San Francisco counterparts, didn’t realize any royalties from the innovative concert posters for Winterland, the Avalon Ballroom, and the Fillmore Auditorium that launched the poster craze.

FAST FORWARD TO 1986. Sixties nostalgia is running high. Publication of vintage rock-poster art in San Francisco Rock (Chronicle Books, 1985) by Marin author Jack McDonough led to a lawsuit by ex-Family Dog manager Chet Helms, who claimed that Chronicle Books had violated his copyright on the artwork. That was a revelation to the five poster artists, who believed that they were the legal owners of the rock posters they’d created between 1965 and 1968 to promote concerts by the Family Dog production company.

“It was like losing the deed to the artistic ranch,” Moscoso, a Yale-trained painter who had settled in west Marin, said at the time.

Kelley and Mouse scored their first big hit with “Zig-Zag Man,” a well-known Family Dog poster plugging a June 1966 Avalon Ballroom concert with Big Brother and the Holding Company, plus the Quicksilver Messenger Service. The poster, which displayed the Zig-Zag trademark logo, helped make the then-fledgling cigarette-rolling-paper company an overnight success and catapulted the artist duo into the spotlight.

In the book The Art of Rock (Abbeville Press, 1986), author Paul Grushkin noted that the duo’s free appropriation of commercial trademarks like Mr. Peanut and the Sunmaid Raisin girl showed “a healthy sense of irreverence toward narrow propriety values.”

During a 1989 interview, Kelley simply smiled at that notion. It was only natural that the poster artists should draw on the “image bank . . . or the graphic flea market” for inspiration” he said. “Those images had been with us all our lives.

“But when Stanley and I did that poster, we got really paranoid. We figured, ‘Oh no. Now they know we smoke dope!’ And we took what little pot we had and flushed it down the toilet. But we wanted to create something that was visual and would make people stop in the streets and read and figure it out.

NO ONE KNEW then that Kelley and Mouse would have an impact on the art world that continues to this day. “In the early days, it was real good,” Kelley recalled, describing the San Francisco underground in 1965 shortly after he arrived from Connecticut. Back then, he was just a wayward helicopter mechanic, motorcycle racer, and hot rod-era cartoonist with a knack for drawing monsters and winged eyeballs.

Mouse, a Detroit native, had a lucrative T-shirt painting business centered around the hot-rod and custom-car industry before moving to San Francisco, where he met Kelley.

The scene was “superhip,” Kelley mused. “But there was no such thing as the word hippie. I mean, it was a brand-new thing.”

In the spring of 1965, Kelley moved from the Family Dog’s Haight Street commune to Virginia City, Nev., to help build the notorious Red Dog Saloon. The now-defunct dancehall was the summer lair of the Charlatans, a San Francisco folk-rock band (Dan Hicks and Boz Scaggs were among its members) with a taste for turn-of-the-century gambler chic and potent hallucinogens–and a penchant for packing sidearms onstage.

It became a popular watering hole for Bay Area bohemians and Sierra residents keen on its Wild West flair and psychedelic atmosphere.

“What I remember most about the Red Dog was all the guns,” said band member and poster artist Michael Ferguson in an interview for The Art of Rock. “That’s the only thing we spent our money on–bullets. One of my favorite things was going down to the dump and spending an hour setting up cans and bottles, then finding an old chair, sitting down, and plunking away.

“It was a real loose Western scene.”

It also became the birthplace of the rock poster and helped inspire the freewheeling San Francisco concert scene that nurtured poster art.

That artwork, in turn, helped foster the street life that served as a focal point of ’60s counterculture. “You could not separate [the artist’s] role from that of the musician. . . . It just seemed like part of the puzzle,” Grushkin wrote in The Art of Rock. “When you take all these people as a group, they represent a revolution that was so palpable and so obvious that you couldn’t walk down the streets of San Francisco or be a kid on the East Coast and not hear the reverberations.”

Alton Kelley and Stanley Mouse will make an appearance Saturday, Feb. 5, from 1 to 5 p.m. at an event sponsored by the Rock Poster Society at the Petaluma Masonic Hall, 9 Western Ave., Petaluma. Admission is $5/members, $10/general public. Their work also is featured through this month at an exhibit of poster art at the San Francisco Museum of Modern Art, 151 Third St., San Francisco. 415/357-4000.