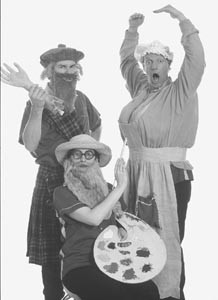 Reduced Shakespeare takes on a millennium’s worth of history

REED MARTIN is pregnant. To be accurate, it’s Martin’s wife, Jane, who is technically with child–the Sonoma couple’s second carbon-based life form–but the local actor-vaudevillian is certainly pregnant in spirit.

After several months of touring with his world-famous Reduced Shakespeare Company–the infamously high- and low-brow comedy troupe that has frequently toured the planet with its outrageous condensations of Shakespeare, the Bible, and American and world history–Martin is now gearing up for a few months of much-anticipated “paternity leave.”

It officially begins right after this weekend’s five-show run at the Marin Center of RSC’s latest production, The Complete Millennium Musical, which basically reduces 1,000 years of history to 100 minutes of bawdy, fast-faced tomfoolery–with singing.

“Though some dare not call it singing,” Martin warns. “We also dance, and I can honestly say that as a dancer, I’m a pretty good comedian.”

Having just ended a successful five-week run at the Seattle Repertory Theater, Martin is back home and in high spirits, in spite of a few phenomenally bad reviews in Seattle.

“One reviewer said something like ‘This is possibly the most amateurish, and certainly the least amusing, show I have ever had the displeasure to see on a Seattle stage,’ ” Martin reveals, as he rumbles into a warm gale of good-natured laughter. “Ouch! That’s not a review, that’s hate mail.”

He has good reason to laugh at such nasty jibes. The troupe’s Seattle run went on to sell out every show, becoming the third most successful event in the 35-year history of the Seattle Rep. In all fairness, a number of critics liked the show. The Seattle Times even called it “the most enjoyable history lesson you’ll ever have.'”

“I think we should do what Tom Lehrer did,” Martin says, in reference to the satirical songwriter who, after a critic remarked that a Tom Lehrer concert added up to an evening wasted, gleefully used An Evening Wasted as the title of his next album.

“I’m serious,” Martin says, laughing. “I think we should start using ‘The most amateurish and least amusing show in history’ in all of our advertising.”

Begun as a pass-the-hat group performing wildly irreverent versions of Hamlet at the Renaissance Pleasure Faire, the troupe has transformed itself many times.

With the Complete Millennium Musical, Martin and company–the current troupe also features Taylor Young and John Pohlhammer–break history down into six ages, from the Dark Ages to the Information Age.

“We cover every important historical and literary event from Beowulf to Baywatch,” Martin explains, “with 25 original songs, including stuff like ‘The Four Norsemen of the Apocalypse’ and one called ‘Heavenly Bodies,'” the latter being an innuendo-filled Barry White-like disco song, sung by Martin as Galileo.

“We wanted to do something different this time,” he says, “to stretch ourselves–and we really stretch on this one. I’m quite proud of the show.”

With a chuckle he adds, “All hate mail aside.