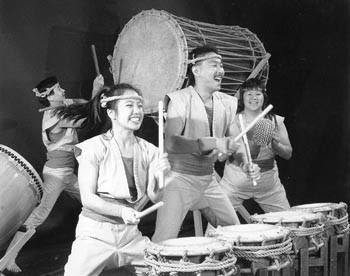 OVER THE YEARS, Roy Hirabayashi has answered a lot of odd questions. As the co-founder and artistic director of San Jose Taiko–a successful and distinctly innovative performance troupe that has toured the United States many times in its 27-year history–Hirabayashi is often asked, for example, to explain the difference between taiko drumming and Kodo drumming.

It’s a question that makes him chuckle.

“I get that one a lot,” he says. Patiently and gently he explains, “Well, the big difference is that Kodo is the name of a famous drumming company from Japan, and taiko is the Japanese word for the Japanese drum, the same instruments that the Kodo troupe uses. All the drums are taiko, but our company’s name also happens to be Taiko.”

“People become confused,” he says, “and they say, ‘Oh, I saw those people from Japan playing Kodo drums.’ But there’s no such thing as a Kodo drum. That’s a little like saying, ‘Oh, I saw someone playing a San Francisco Symphony string instrument’ when what they saw was a violin.”

That doesn’t mean there aren’t a few important differences between the musical styles of groups like Kodo and San Jose Taiko–or any of the other Japanese drum groups that have made successful careers in the wake of the current world-music boom.

In fact, just like modern rock bands or string ensembles such as the Kronos Quartet, every drumming company comes to develop its own unique sound, style, and sense of visual flair. That’s definitely true for San Jose Taiko.

“We very much have a style of our own, different than Kodo or a lot of the other groups coming from Japan, different from other Japanese-American troupes,” Hirabayashi says. “We approach our performances with a unique style that is reflective of us.”

Local ears will get a chance to hear that unique sound on Sunday, Feb. 6, when San Jose Taiko makes its first-ever appearance in Sonoma County, at the Luther Burbank Center.

“In our hands, taiko is very much a Japanese-American art form,” Hira-bayashi continues. “Growing up in the United States, my own musical background is not traditional Japanese. I grew up listening to rock and roll, Latin, jazz, soul music, R&B, whatever. With members made up of third- and fourth-generation Japanese-Americans, and even a number of non-Asians, our music really reflects a wide cultural experience.”

By writing their own musical pieces, the San Jose drummers are free to draw on a full spectrum of musical influences, incorporating everything from rock and roll to various African and Cuban rhythms in a one-of-a-kind blend of powerful sounds and hyperkinetic choreography to reflect their experience as Japanese, as Americans, as inhabitants of the planet Earth.

Using a variety of Japanese drums, ranging in size from the handheld josuke to the large drums the size of wine barrels, the expert drummers are able to coax a breathtaking array of sounds and percussive melodies from their instruments onstage, often leaving audiences revved up and cheering for more.

WHEN SAN JOSE Taiko first began, they were only the third such ensemble in America; the other two were based in San Francisco and Los Angeles. Now there are over 100 taiko drumming organizations. Through the years, Hirabayashi–along with his wife, cofounder P. J. Hirabayashi–has overseen the troupe’s progress as the performers embarked on a series of international tours, began a popular training program for adults and youth, and collected countless awards.

Asked if such longevity and success were expected or dreamed of in the early days of San Jose Taiko, Hirabayashi laughs.

“By no means, no,” he exclaims. “At the very beginning we were just doing it for fun, as a kind of hobby.”

In fact, when the group first started drumming in a Buddhist temple in San Jose, it was intended as a local cultural activity, “something for the youth group to become involved with that was musical and cultural at the same time,” says Hirabayashi.

“It turned out that there were many people from the local Japanese-American community who became interested in participating also, and it sort of grew from there,” he adds.

Hirabayashi explains that he was drawn to taiko drumming as a young adult, while looking for musical forms that were related to his cultural heritage and background.

“When I first saw taiko,” he recalls, “it was a very moving experience for me. It was at my local community Buddhist center, at the summer festival, what we call the Obon Festival, and there was this one man there who always came to play taiko for the dancing that happened at the festival. I was very moved to discover an art form that was intrinsically Japanese, but that could be translated into a distinctly American cultural thing at the same time.”

Having trained over a thousand drummers in the last quarter century, Hirabayashi feels fortunate to have shared his love of taiko with increasingly eager generations of musicians.

“The performance of taiko is a very special experience,” he says. “It’s a combination of many different things, the physical part of playing, the spiritual part, the musical part, combined with the whole ensemble attitude of playing taiko in a group. All of that is what draws a lot of people to playing taiko.”

Not to mention that it’s a first-rate aerobic workout for the performers.

“Drumming can be very physical,” Hirabayashi agrees. “Especially the way we do it.”

In the standard performance, there is about as much running about, with drummers sprinting from drum to drum, as there is actual drumming. And the players are seldom silent, erupting into frequent cries and synchronized shouts as they segue from one piece to another.

“It’s a real flow of music,” Hirabayashi says proudly. “There are interconnected pieces joined by calmer interludes and other activities that take place in between the songs. The whole event is like one big opera of sorts, one musical production, and so it’s really different, a very different onstage environment than you are likely to see with any other drumming company.

“It’s not just a lot of loud power drumming,” he adds.

Best of all, according to Hirabayashi, the audience at a live performance “will actually feel the music, will feel the sound in their bodies, that physical experience of the drum.

“There is,” he says, “nothing like it on the planet.