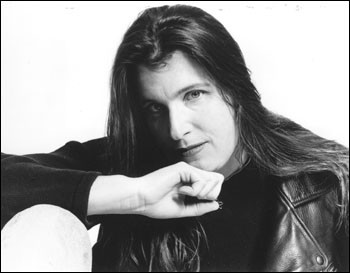 HOLY FEMBOTS! The rambunctiously opinionated sexpert and author Susie Bright–who’s got something intriguing to say on almost every topic–has just seen the new film A.I.: Artificial Intelligence–in which an abandoned robot boy obsesses about his “mother” and randy android stud-muffins service sex-starved humans.

You can bet Bright has a lot to say about that.

Of course, Steven Spielberg’s new sci-fi fantasy seems to be inspiring plenty of heated debate, with moviegoers neatly divided between those who were dazzled by the tale of the man-made boy who longs to be real (Haley Joel Osment) and those who, basically, hated every minute of it.

Susie Bright is among the latter. “I’d rather have been frozen in ice for 2,000 years than to have sat through that ill-conceived, wretched bore of a film,” she says, offering a concise critique that, in most circles, would loudly signal the end of the conversation. Fortunately, A.I. has some pretty interesting sex in it, so our discussion is hardly over yet.

“That could have been a great movie,” says Bright, “just about him and his assignations. I always wanted to have sex with Data, the android from Star Trek: The Next Generation,” she happily confesses. “I’d do Gigolo Joe in a minute! Though I didn’t like his ‘jukebox.’ I’d press the mute button, I think!”

Such thoughts are the nuts and bolts of Susie Bright’s colorfully off-color career. The reigning Cheerleader Queen of Unapologetic Sex, the Santa Cruz-based provocateur is the celebrated author of The Sexual State of the Union and the brand-new How to Read/Write a Dirty Story. She has also covered sexual issues for Salon and hosts a weekly audio show on her susiebright.com website.

And every now and then, she has sex with robots. “Oh yes, I enjoy sex toys of various descriptions,” Bright purrs.

As a former co-owner of San Francisco’s world-famous sex-toy emporium Good Vibrations, Bright has an affection for state-of-the-art mechanical sex partners that is, um, well documented. She duly points out now that just the question–“Would you have sex with a robot?”–implies that there’s something unnatural about the idea of having intimate knowledge of an appliance.

“Human beings use human-made products to deal with every aspect of our lives, both intimate and practical,” she says. “Why draw the line at sex?”

We certainly don’t draw the line at peopling our movies with sexy android love slaves. Are all the touchy-feely robotrons in films like A.I. merely expressions of a basic human desire to find the perfect lover?

“That’s one fantasy,” Bright allows, “but it’s also the natural taste for variety that every libido is driven toward. We are genetically ‘programmed’ to want to try something new! I’d like to have sex with the perfect robot. With a robot, you don’t have to wonder if they’re having a good time, did they come, will they respect you, blah blah blah. The robot will not ‘judge’ you in the least. They don’t need you, but they will service you.

“Obviously, this wouldn’t be fulfilling as a relationship,” she adds.

“But it could be very intriguing and fun sex. And now that I put it that way . . . hey! Bring on the vacuum cleaners!”