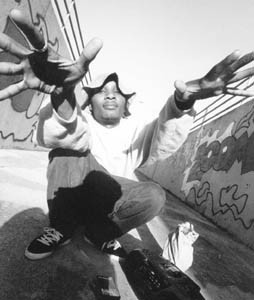 WHILE PURE, hard dance sounds like techno, house, and drum ‘n’ bass remain the face of electronica to the mainstream, DJ cut-and-paste abstractionists are really the heart of any of the field’s endlessly crossbreeding subgenres. San Diego DJ Greyboy is the go-to leader of San Francisco’s Ubiquity label, and he’s one heck of a groove crossbreeder. His third disc, Mastered the Art, is a typical DJ poly-stew, as Greyboy dips his brush into hybrids like acid-jazz ambiance, lounge hip-hop, world-folk big beat, and electro-trance soundtrackisms. What makes Mastered the Art a standout is Greyboy’s novel employment of Eurasian (especially Mediterranean) stringed instruments as not mere flavoring but as the foundation of several breakbeats–sitar power chords in the title track, slabs of ukelele anchoring scratching on “Hold It Down,” plucked harp figures and Spanish guitar in place of hip-hop’s piano loops on the very Wu-Tang Clanish cuts “Uknowmylife” and “Smokescreen.” Much of the disc evokes a soundtrack without seeming as if it would work as a soundtrack, which is good–Greyboy is at his strongest when he messes up his own jazzy slickness with dirty global funk. A more subtly stunning piece of DJ groove-collage work is Pete Rock’s Petestrumentals. Rock’s second outing sans his rapper-partner CL Smooth, the disc is technically a set of hip-hop/jazz instrumentals, but the sturdy smooth-lounge tracks speak in a voice that’s majestically controlled and independent. Rock’s craft is complex understatement, using simplicity to layer depth into spare grooves and inverting normal ideas. On “Hip Hopcrisy,” a piano loop is spliced, diced, and recombined at multiple angles over a monotone bass pulse. Two cuts later, on “Pete’s Jazz,” a vibraphone loop plays the part of droning thump while bass provides melody and color. Petestrumentals is a must for fans of abstract hip-hop; as a plus for electronica fans, the consistent beats could edit into a rave club mix as easily as the distant, spacey fills could add warmth to a trance festival.

NORCAL avant-garde hip-hop producer Dan the Automator trademarks himself with smart funk-collage collaborations like Handsome Boy Modeling School, but his latest project, Gorillaz (with Blur’s Damon Albarn), is a limited loop of casual clichés. Gorillaz was created as a cartoon, but as Cheez Whiz it’s not only low-fat and low-sodium, there’s barely enough aerosol to push the corn out of the can. The beats and grooves are weak, peppered plentifully with global-kitsch hooks that are as fake as the druggy pseudo-dread of the disc’s reggae-dub ambiance. When Buena Vista Social Club vocalist Ibrahim Ferrer guest stars on one cut, it’s as if the Automator is saying, “Hey, we’re Latin, too!” But like every empty, silly nuance on Gorillaz, that Latin nod is a dumbing down to an alt-rock notion of Funky Stoopid. Like the Automator, trip-hop point man Tricky has also traded groove innovation for alt-funk clichés. Guest stars don’t help him either; on his new disc, Blowback, the presence of the Red Hot Chili Peppers on two cuts shows Tricky meeting the mainstream halfway with tame aggro-funk where he once ignited the underground with edgy electro-soundscapes. Tricky no longer seems an auteur presenting trip-hop as the dark side of electronica’s family tree; if the disc’s title and smoking-kiss cover art suggest a metaphor for breathing one’s own exhaust, then the damage of such secondhand smoke is evidenced on the disc’s smartest moment, a trite recasting of Nirvana’s “Something in the Way” as synth-pop with tropical accents.