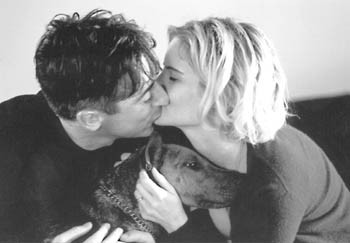 All those long nights spent huddled in darkened rooms with hollow-eyed strangers (her fellow critics), all those years devoted to cool, objective cinematic appraisals, and of course all those lousy movies–they’re finally things of the past.

“And now you show up,” she grouses, “and ask me to weigh in on a movie. Right when I’m trying to quit.”

Shulgasser-Parker agrees, but there’s one catch. She’ll talk about the film in terms of its sociopsychological perspectives, but she won’t offer any critical opinion. “Though naturally,” she adds coyly after seeing the movie, “I do have an opinion.” What critic wouldn’t?

I know, I know. Inviting a recovering film critic to a movie like that is a bit like sneaking the Bush twins into a bar for a cup of coffee. The Anniversary Party is a film that demands to be trashed. Even so, Shulgasser-Parker’s cinematic sobriety seems to be holding. For now.

“What any intelligent person beyond the age of 30 begins to realize,” she says, “is that if you’re going to live a happy, productive life, then you have to get rid of certain kinds of behavior around you. . . . Everybody has friends who they ought to get rid of.” Especially in Hollywood. Unhappy people, the movie would have us believe, are particularly abundant in L.A., where suffering for one’s art is everyone’s favorite sport.

“But you don’t have to suffer for your art,” insists Shulgasser-Parker. “Not all your life. Maybe suffering does provide some fuel for your art–when you’re younger–but it’s much better to be happy, and happiness is also fuel for art.”

She mentions the moment in the film when Leigh compares herself to a character in her husband’s latest novel. “‘She’s obsessive, controlling, jealous, and neurotic. She’s obviously me!'” quotes Shulgasser-Parker. “And she says it as if she’s boasting. I think that, past the age of 30, that’s no longer charming.

“And that,” she adds, “is why this is such a childish movie.”

A childish movie? Uh oh. Was that criticism? “While the filmmakers seem willing to show the dark, neurotic underside of Hollywood,” she continues, “It’s clear they’re not too upset about it. They’re proud to be neurotic. It’s a big turnoff.”

Well, it’s all over now. After a valiant effort to resist, Shulgasser-Parker has plunged into a critical binge. In rapid succession, she tears into the film’s most egregious flaws: over-the-top acting, numerous loose ends, and bad editing.

All in all, it’s a magnificent purge. “For the actors involved in this,” she says, “I’m sure it’s a very expensive home movie that they all will cherish. But for a stranger to sit through it, it’s just a trial.

‘So. Thank you,” the ex-critic concludes. “I enjoyed this, very much.”