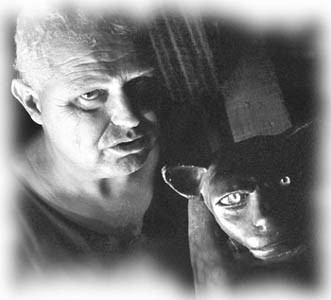 Shadow of the vampire: Stephan Buchanan is building a new nest–Theatre Vampier–in Petaluma .

THE BUILDING itself is nondescript. A former mill house, it’s one of many such structures in Petaluma, all slightly spooky, all reminders of the town’s ancient agricultural identity. The cityscape is crammed with these ominous gray hulks–misshapen, improbably architectured, entirely swaddled in dented, rusting corrugated metal. There is little about this one that would turn anyone’s head, nothing to make you wonder about who, or what, lived and worked inside that big old building.

Never in a thousand years, if you had them, would you guess that up those steps and beyond those gray walls lies the lair of a vampire.

Stephan Buchanan is that vampire–and he’s standing at the door, beckoning me inside.

“Hi,” he says, warmly shaking my hand. “Let me just finish with the photographer, and then you’ll have my undivided attention.”

Clearly, this is a vampire with something to smile about.

Buchanan, an experienced dancer, choreographer, painter, and teacher, is the director of the NeoDanze Performance Companie, a one-of-a-kind dance-theater troupe specializing in vampire-themed performance works.

Something of a legend in San Francisco and the North Bay, NeoDanze all but disappeared from the scene six years ago. The company’s last major offering, a traveling production of the blood-soaked epic Nosferatu in the Valley of the Moon, was in November of 1995. While continuing to teach dance three times a week, Buchanan decided it was time to reorganize and took a pseudo-sabbatical.

Then, five years ago, he found the old mill he currently occupies.

Where others may have seen only dusty, junk-filled caverns and spooky, pigeon-fouled lofts, Buchanan saw the future: a base of operations for NeoDanze that could hold a dance studio, rehearsal spaces, dressing rooms, storage facilities, and a custom- designed, vampirically decorated stage area. The Theatre Vampier.

“I’m establishing a nest,” Buchanan says. “Which in vampire parlance means a hangout for the undead. We’ll be able to upset hundreds of people, instead of just scores.”

Buchanan plans, for the time being, to keep the Theatre Vampier closed to the general public. While NeoDanze will continue to produce shows for the public, probably using venues they’ve been successful at in the past, such as Spreckels Center and the Luther Burbank Center, events at the Theatre Vampier will initially be “invitation only.”

Having established a website (www.theatrevampier.com), Buchanan has taken the step of hiring a part-time assistant to answer the phones and handle the e-mail, which has been steady.

“Ninety-eight percent of the people who write are cool,” he says, “but the other 2 percent are just plain strange people.”

Finally, Buchanan has invited the press in for a look around. It’s a tour that is anything but run of the mill.

“WATCH YOUR STEP on the mill stairs,” Buchanan cautions, leading the way up to his living area. “They have a difference cadence than normal stairs.”

Different cadence indeed. There is little about Buchanan’s vampire lair that isn’t different, from the gargoyles at the foot of the steps and the paintings of bleeding, sharp-fanged nudes on the walls to the dangling chains–not a few of which are attached to the big, black, Edgar Allan Poe-like, four-poster bed in the loft–and the massive, round spider-web window that lets in the moonlight on bright, fogless nights.

Everywhere you look, there are things with teeth and horns: masks, dolls, mannequins, sculptures. As one might expect, this place is like something out of a horror movie: creepy, cluttered, shadowy–and very, very cool.

Downstairs is the studio: a vast, sprung dance floor, painted in concentric circles, over which hangs a wrought-iron chandelier formed in the shape of a pentagram. Up a flight of steps is the loft that will be La Fleur du Mal, a dress shop specializing in vampire couture and what Buchanan calls “wedding gowns for the undead.” In the next room is another studio, which Buchanan plans to use to make custom gargoyle sculptures, and beyond that is another room that, according to plan, will feature a forge for the creation of “ritual knives and daggers.”

The Theatre Vampier it seems, will be a full-service vampire nest.

“WOULD YOU like some wine?” Buchanan offers. My host–who laughs mischievously when asked his age, then places it at 2,185–points to a glass container on the kitchen table. Inside are some pieces of wood and something big and black and very still.

Taking a seat in a dimly lit corner of the room, Buchanan fills in a few details about his past. A self-taught artist, he’s worked in all aspects of the theater, in half a dozen countries, including England, Canada, and Australia. He established the first NeoDanze company in England, pioneering his own performance style, which incorporates modern dance, martial arts, and sword fighting.

The son of a Boston contractor, Buchanan worked odd construction jobs to support his endeavors–a craft he still practices part-time–eventually building a side career as a movie set builder (Superman, The Empire Strikes Back, Silkwood) and as a movie extra. Among other roles, while living in England he played a storm trooper in Star Wars and a hawkman in Flash Gordon before coming back to America.

Around 10 years ago, he was bitten by the vampire craze, then in high swing, fueled by the phenomenally popular Anne Rice books.

“It’s the power and eroticism of vampires that attract me,” he explains. “The vampire is the perfect vehicle for all my art and my spirituality. They are invulnerable and sexy.

“Besides,” he adds, with a semi-wicked smile, “there’s nothing better than young, naked prey.”

I mention that, according to the media, the vampire phenomenon is pretty much passé. “Isn’t it?”

“Right, vampires are passé,” Buchanan says, smiling. “That’s why there are over 10,000 vampire-themed websites on the Web. That’s why, every few months, a new vampire movie is released or begins production. That’s why, every Halloween, the vampire is the most popular costume on the market. Because it’s passé.

“The vampire,” he continues, “is the oldest and best-known supernatural creature in the world, appearing, in some version, in nearly every culture on the planet. But vampires are passé.

“Personally, I plan to be a vampire forever.”