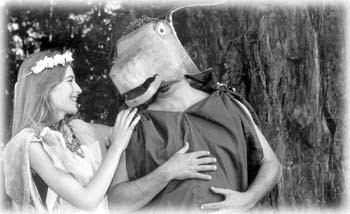 Shakespeare in the dark a hit

WHAT HEMPEN HOMESPUNS have we swaggering here . . . ?” asks the deviant sprite Puck. The answer, happily, would be River Repertory Theater company’s outdoor production of William Shakespeare’s A Midsummer’s Night Dream under the deft direction of Michael Tabib.

Director Tabib has successfully resisted the infernal Renaissance Faire trappings that most amateur Shakespeare companies use as their default setting.

Instead, Tabib’s production attempts to invoke a decidedly Athenian aesthetic–after all, A Midsummer’s Night Dream is set in Athens. Costume designer Craig Wilkinson rises to the challenge, expertly interpreting Grecian chic with broad strokes from a kaleidoscopic palette borrowed from Walt Disney. Women are resplendent in brightly colored sateen togas and teeming tresses; male actors wade knee-deep in sandal straps and are crowned with garlands.

Though a tad Road Warrior-ish, with his long spider-webbed cape, 18-inch horns, cloven feet, and platoons of fur, Oberon (Jim Loughborough) is a daunting and emblematic spectacle.

With this newly revamped River Repertory company, Tabib has assembled a crackerjack cast of some two dozen performers, with 11-year-old Michael Spector as the impish, gallivanting Robin Goodfellow (aka Puck), stealing much of the spotlight; this kid is a prodigy.

Spector delivers Shakespeare’s lines so fluidly that, at times, he seems to have fallen down the wrong English well (circa 1600) into a wormhole that jettisoned him through time and space to the Monte Rio Amphitheater. A Midsummer Night’s Dream is Spector’s theatrical debut and heralds the arrival of a significant talent.

Also offering a prodigious performance is 15-year-old Honey Grace Roberts as Titania, Queen of the Fairies. The winsome Roberts effortlessly evokes both supernatural regality and the role’s requisite sexual politicking without venturing into the shopworn commedia dell’arte treatment lesser actresses may have given the part.

Roberts’ Titania makes a good foil for the preenings of Robert Michael Ruiz’s well-conceived, vainglorious Bottom. The two milk most of the scenes’ comic potential without forfeiting the writing’s inherent poignancy and are sweetly underscored by the fine acting of Titania’s lovely fairy attendants.

Young Liz Foster-Shane’s portrayal of the scorned lover Hermia is so emotionally vivid that when one’s comprehension of Shakespeare’s frequently cryptogrammic text fails, whole subplots roll off her furrowing brows.

Audiences are encouraged to bring picnics, their own seating, and warm clothing, as the breeze off the Russian River can get chilly at night.

“Oh weary night, oh long and tedious night”–this most certainly is not.