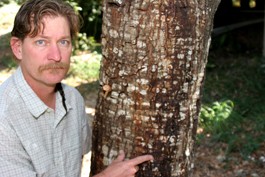 A few years ago, Michael Kelley realized that the hillsides on his 20-acre property near Rio Nido were covered with brown tan oak bushes and trees–dead ones or those that were quickly dying.

Two months ago, he made a routine hike around his place to see how things were doing. Two treasured oaks, which had appeared to be fine a month earlier, had succumbed to sudden oak death (SOD).

“It was our most amazing place. We called it the ‘lost world,'” Kelley says of the portion of his property that he and his wife always show to agile visitors able to make the 20-minute trek. “Now the two–not the tallest but the grandest–trees are suddenly dead.”

There’s not much Kelley can do but watch, wait and haul out the dead.

“We’re not kids anymore, and it’s tough going up these hills with chainsaws and taking trees down,” he sighs. “It’s a slow process, and I don’t think our progress is keeping up with the spread of the disease.”Kelley realizes that the land around him is undergoing a fundamental change. “We’re moving into a new look around here. I don’t know what it’s going to be, really.”

Kelley is one of nearly a hundred people who gathered in Occidental on Aug. 18 for a community meeting about SOD. They listened to experts explain what’s known about a disease that has killed more than 1 million trees in California since it was first detected in the early 1990s, and they aired their own worries and SOD-related problems.

Sudden oak death is fatal to tan oaks and coast live oaks, among other species. The microorganism that causes it can thrive on more than 105 host species and is often spread through water runoff from the California bay laurel. The disease has hit particularly hard in the North Bay’s redwood fog belt, especially after wet springs in 2005 and 2006 created prime conditions for the organism.

“It was kind of the perfect storm as far as spreading the pathogen. There have been tons of new infection, tons of new die-off as a result of those two wet springs,” says Katie Palmieri, spokeswoman for the California Oak Mortality Task Force.

Known as Phytophthora ramorum, the SOD organism is currently found in 14 coastal California counties. Its spores travel through water. The wet conditions of recent years haven’t prompted its discovery in new counties, but they did intensify its presence in existing locations, including Napa and Marin.

“In some areas, the infection rates are even higher than they were at the original infection time, which was large,” Palmieri says.She adds that everyone needs to be involved in stopping the spread of SOD, which was recently found inside Santa Rosa city limits. “There’s no magic fence that stops it from moving from one location to another.”

The disease has hit in a relatively small area of Oregon, where officials tried to eradicate the problem by extensive tree removal. “What they’ve found so far is that they’ve really knocked it back hard, but they still find it in the soil,” says Lisa Bell, Sonoma County’s SOD coordinator. “As of now, even the most radical eradication efforts haven’t worked.”Although Napa is infected, it has not been hit as hard as Marin and Sonoma counties. “So far, what we have found is that it tends to be on the west.

For those who are aware of the signs, the North Bay is undergoing a fundamental change. Just as Dutch elm disease altered the Eastern states, sudden oak death may be permanently revamping our local landscape, says Marin County forester Kent Julin.”We’re going to see a shift in the kind of forest that we have. It’s kind of like a slow-moving wildfire that will change the character of the forest.” In the process, it’s also raising the risk of actual fire.

“It has never been more dangerous than it is right now,” Julin adds. “We’re in a place where we have a lot of standing dead material in the forest. As that falls on the ground and decays, the fire danger diminishes, but right now we have standing dead trees with dead leaves on them that are highly flammable.”

On the 19,000 acres managed by the Marin Municipal Water District, there are areas of tan oaks with a 100 percent die-off rate, says spokesperson Carl Sanders. It’s not possible to remove them all, so the district is focusing on areas that pose the biggest safety risk.

“We’ve certainly lost a number of significant heritage live oaks around our facilities and roads that it’s been heartbreaking to have to remove,” Sanders says. “We’ve had to take down numerous trees that were 100 to 200 years old last year. It’s a shame to have to see these big old trees that have to be dropped.”

There are also a lot of dead trees a little farther north, says Bell. “The effects of those wet springs is what we’re probably seeing now in the field, which is a lot of mortality, especially in the West [Sonoma] County. But this pathogen is so new, the patterns are just being discovered.”

Intensive research is being done. Researchers have pinpointed the chemical Agrifos as a potential preventative treatment, but there is no cure.

Working to prevent infection in a single tree by using the chemical Agrifos is similar to using chemotherapy, says Brock Dolman, a biologist with the Occidental Arts and Ecology Center. “If you would like to save a charismatic individual tree, and it’s not already in an advanced stage of disease, it’s possible to apply this protocol and save an individual tree.”

But the problem is much larger than that. “We’re very much struggling with how do we manage the whole ecosystem, and we have some special trees that we don’t want to see die. How much do you do for one tree?”

Dolman lives on 80 acres in western Sonoma County as part of the 11-member Sowing Circle LLC. In the last month, they’ve spent almost $10,000 to have a professional arborist remove dead trees on their property.

“In the last two or three years, I’d say maybe 90 percent of the large tan oaks on our property have died,” Dolman says. He estimates that about 50 percent of their coast live oaks are showing advanced SOD symptoms.The spread of SOD shouldn’t really be a surprise to anyone, Dolman says, citing the extensive impact people have had on local woodlands in the last 100 to 200 years. “It doesn’t take much in a system that’s already weakened.”The Sowing Circle are considering using Agrifos to save some of the larger trees, and are experimenting with a special compost tea blend to add nutrients and other organisms to woodland soils in an effort to improve the overall forest health. Results have been mixed, but they keep trying.

Forest Stewardship workshops with SOD information are scheduled Sept. 29 in the Mark West Creek watershed and Oct. 13 near Occidental. Phone 530.224.4902. Details about SOD are online at www.suddenoakdeath.org.