Making a move toward whole grains with Peter Reinhart 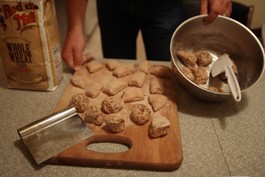 Photograph by Elizabeth Seward
Twelfth Night: One of the many secrets of Reinhart’s breadmaking is to cut the dough into 12 pieces before finalizing.

I‘ve been baking bread at home, by hand, for about three years. My blueprint is a friend’s recipe, drawn for me in comic-book form, which is the same basic recipe from The Joy of Cooking. The adjustments I’ve made over time–adding more butter and honey, letting the dough rise for twice as long–have kept me satisfied with a simple, easy-to-make loaf of bread.

The comic-book recipe calls for all-purpose flour, but in the last year I’ve been trying out mixtures of whole-wheat flour. What could be better than whole wheat? However, the preparation problems I encountered, many of them minor, were compounded by the final result: a thick, unlively, flat loaf of bitter-tasting brick.

With the low-carb craze thankfully in the dust, the food-fad pendulum has swung back into whole-grain territory; even Wonder Bread now makes a whole-grain loaf. But baking whole-grain bread comes with a huge challenge: getting the bread to rise to full-size. Bran fibers, found in whole-grain breads, are bullies of the playground—they love to get in the way of the gluten’s ability to trap gas and expand the dough.

Recipe #1: WW Bread:Reinhart’s solution comes from years of globetrotting study, and no one who has ever made bread will be surprised that it involves more time. It’s a two-day process called delayed fermentation, used throughout Whole Grain Breads. Reinhart is so exact in his scientific explanation of delayed fermentation, so seductive with his anecdote-laden pitch for the process, that I, as an amateur breadmaker interested in whole wheat, had no choice but to pick out a couple recipes, ready my tiny kitchen and give it a go.Recipe #1: Whole Wheat Sandwich Bread

As tempted as I was to try more complex recipes from Whole Grain Breads, the simplicity of basic whole wheat is the best arena in which to accurately compare Reinhart’s methods against my own. On day one, I prepare the two pre-doughs: the soaker and the biga. The soaker, designed to maximize flavor in the grains, has no yeast, while the biga, with yeast, is the backbone of the delayed-fermentation concept and the source of one of Reinhart’s excellent suggestions.

Although I have an avowed disinterest in using a KitchenAid, hand-kneading often means getting gooey dough stuck all over my hands. Initially, this resulted in my overadding flour to keep the dough off my palms, and I naturally wound up with bread drier than summertime dirt. Over time, I’ve developed my kneading technique to a point where almost no dough sticks to my hands, but even so, it’s more of a circumventive defense mechanism than a skilled, integral step in the breadmaking process; I didn’t feel like I was really, as they say, at one with the dough.

Reinhart’s solution is to get one’s hands wet before kneading, and keep them wet, which, frankly, sounds gross. I try it with the biga, and it works wonderfully. It’s so simple and perfect. Why hadn’t I thought of it before?

On day two, I separate each pre-dough into 12 sections with a pastry cutter, mix them with more flour, salt, yeast, honey and butter, and unleash the glorious wet knead again. The dough feels harder than usual, but hearty. I follow Reinhart’s instructions for forming a sandwich loaf, wait for it to rise, pop it in the oven and start cleaning up.After pulling the sandwich loaf out of the oven and letting it cool a bit, I slice it open with the serrated knife. Steam billows out of the body of the loaf, lightly grazing my cheeks on its way up. I drop a pat of butter in the center of the slice and watch it slide over the rugged texture of the piping hot bread, finally face to face with the results of my two-day journey as I pop it into my mouth.

And? It’s OK. It’s still a little dense for my tastes, with slight rise and even less spring, and it tastes slightly bland. Had I not been rigorously following Reinhart’s recipe, I would have added sugar to the yeast.

Naturally, I call Reinhart up to hash it out. I don’t usually call famous bread makers up to complain, but I do want to get to the bottom of my own failure. It turns out that Reinhart, who used 350 people to test the recipes for this book, is interested in my woes. He sympathetically enlists me as tester 351.

“It could be the age of your flour, it could be the brand of flour,” he guesses. “It must have sucked up a lot more of the moisture than I would have expected.” I used Bob’s Red Mill, made from red wheat, and Reinhart points out that red wheat sucks up more water than white wheat. He suggests that I add more water to the final dough, adjusting tablespoon by tablespoon so that it is soft and supple. “The hardest thing to teach anyone who’s making any of my breads,” he says, “is that the dough, in the end, is the final decision maker, not the recipe.” Also, he says, if the dough is soft, it won’t need sugar-fed yeast, because it will rise quicker than a hard dough anyway.

Reinhart analyzes with a scientist’s zeal those elements that affect bread: the weather, temperature of refrigeration, type of water and time of year. “Those are all subtle little things that make a difference in how the dough performs,” he says. “In a book, you don’t want to go crazy and say, ‘Here’s five variations for how to do it,’ but the fact is that there are five to 10 variations for how you can put the ingredients together, and any of them are legitimate.”

Recipe #2: Multigrain Pizza DoughTo hell with the wet knead. Though it was heavenly for the sandwich bread, the consistency of the pizza biga is much wetter and stickier already, and adding water to the knead exacerbates this already irritating quality to a flustering degree. The soaker is much simpler, and it’s where I add my grains—flaxseed, amaranth and rolled oats—hoping they won’t clash with the pizza toppings.

On day two, I once again mix the two pre-doughs by chopping them into twelfths with a pastry cutter, adding more salt, yeast, flour and olive oil before the final rise. The final dough has a much different feel with pre-fermented dough, and dry-kneading it is much easier than usual. I chop it into fifths, coat it in oil and wait for it to rise.

For my toppings, I use sauce, basil, roasted eggplant, Parmesan, artichoke hearts and the last cherry tomatoes from my withering September plants in the backyard, marinated in balsamic vinegar and splashed with a couple twists of black pepper. One of Reinhart’s tips for pizza cooking is to preheat the oven an hour in advance in order to wholly infuse the pizza stone with heat. But the night outside is hot already, and even with all the windows open, the kitchen is so dastardly hot that the cheese melts on the pie even before I put it in the oven.

The recipe calls for just five to eight minutes of baking, and since I usually bake pizza for 12 minutes, I opt for the high end of this scale. After eight minutes, the crust is softer than I’d like it to be, but I pull it out anyway. It’s delicious; the grains in the dough make the crust come to life, a rockiness that marries divinely to the mushiness of the toppings. The crust was so dense that I could only eat two slices before I was stuffed to the gills. I would have loved to cook the pizza longer, since I enjoy slightly crunchier crusts and seared cheese.”If you’re cooking a pizza for 12 minutes,” Reinhart warns, “then basically you’re killing the dough, because you’re drying it out.” The sugar in the yeast is an option, and he has a tip for crisping the crust. “Try putting your stone on the bottom shelf,” he says. “You’ll get more bottom heat, and the bottom should be crisper.”The golden rule for home pizza baking is to get the oven as hot as possible. Ideally, a pizza should be cooked at 600 degrees. (In Italy, Reinhart notes, pizzas are baked at around 800 degrees.) My own oven goes to 500, and Reinhart’s only goes to 550. Of course, it’s all back to science. “It’s amazing,” he says, “what that 50 degrees will do.”