Further proving that if you market it,we'll drink it. 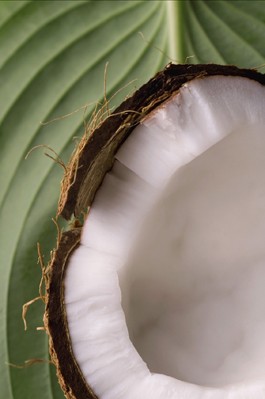 Michael Kirban, a young beverage entrepreneur, sits in the cool shade of a conference room on a recent Tuesday, clutching a box of juice. The box is decorated with a private beach’s worth of sand, surf and palm trees, which may explain the goofily tropical theme that pervades the room–from the frond-green carpeting to the small sandbox planted with two potted palms. All that’s missing is the babe in the thong bikini.

The juice box itself has a healthy dose of writing on it—bold, motivational sayings that implore the drinker to “Rehydrate,” “Rejuvenate,” “Revitalize” or simply “Fuel up. Naturally.” It is vaguely octagonal in shape, and within its angled walls sloshed 11.2 ounces of a substance that Kirban refers to alternately, reverently, as a “carbonation vacation,” a “vacation in a bottle,” a “natural isotonic” and a “hangover cure.” Sometimes he simply calls it by its given name, Vita Coco.

“It’s coconut water!” says Kirban, 32, with a salesman’s enthusiasm. “It’s got 15 times more electrolytes than the leading sports drink and two banana’s worth of potassium per serving, which is why we’re not marketing it as just a juice. If it was just a juice, I don’t think it would sell like it sells.”

Kirban has been marketing, and selling, Vita Coco for nearly three years, offering it to the thirsty masses as one of the latest self-help power liquids. He cofounded and runs the business with his friend, Ira Liran, 29, who covers the production and export side of things in Brazil. By their own admission, it is nothing more (or less) than coconut water, the clear if slightly spoogey substance that tropics-dwellers have been slurping from coconuts for centuries. Repackaged as a super beverage, coconut water is a powerful rehydrant, a hangover cure, a genie in a loud, beachy bottle.

“We’re trying to rehydrate the world one coconut at a time,” declares Liran, speaking from his adopted city, São Paulo, Brazil.

Now, with a shiny new sales contract with megaretailer Target, the duo are also hoping to hydrate their business prospects–perhaps even get lucky someday like Glacéau, the New York–based maker of Vitamin Water, which recently sold out to Coca-Cola. The price tag for the Glacéau deal was a mouth-watering $4.1 billion. But its real significance may have been the affirmation, even apotheosis, of functional beverages, those performance-boosting super drinks that lure consumers with that most American of all promises: consume your way to a better you.

Back in the drink-deprived mid-’90s, when Snapple still seemed like some kind of exotic ambrosia, the life of a juice peddler, or even a juice magnate, would probably have held little allure for the likes of Kirban and Liran.

But in the intervening years, something strange happened. Aspirational Americans discovered aspirational beverages, ambition-driven drinks with names like Smart Water, Guru and, yes, Playboy Energy Drink. First one brand then another popped up on store shelves, promising brains, beauty, health, energy, sex, stamina or whatever else today’s urban striver could possibly desire. So when Pepsi and Coca-Cola began snapping up some of the bigger brands like Naked Juice and Vitamin Water last fall, an unmistakable frisson of expectation ran through the beverage sphere.

Of course, even in this age of post–Vitamin Water hype, a company like Vita Coco still has to grapple with some serious challenges–beginning, perhaps, with the fact that coconut water can be an “acquired taste,” the kind of product that requires “customer education,” as Kirban calls it.

Still, the two have managed to “educate” a critical mass, and the beverage will soon take up residence on shelves at 400 Target stores; if it sells well, it will go out to 1,100 more.

The story of Vita Coco begins, as all good stories should, in a bar. In February 2003, our fearless twosome were out for a night of drinking and carousing at a Jewish-Latin salsa party in Manhattan’s East Village.

“I was like a kid in a candy store,” Liran remembers.

Among the bonbons that caught his eye was a pretty blond lass with an alluring Latin flair. Overwhelmed by the sense that she was the One, Mr. Liran approached and, after several hours of concerted charming, managed to seduce a spark from her. Two months later, he hopped a plane and followed her to the land of pubic grooming and coconut water: Brazil.

At the time Liran arrived, two trends were spinning simultaneously, but separately, in the Northern and Southern Hemispheres. The United States was in the early grips of the enhanced-beverage craze, while Brazil was in the throes of a passionate coconut-water mania. Liran knew little about beverages, but he knew a trend when he saw one.

Thus was the Vita Coco brand born in all its splashy glory. From the first, Kirban knew that he wanted the promotions staff to wear green-rimmed soccer jerseys, etched with Brazilian superstar Pelé’s number 10. He also knew, as did Liran, that coconut water’s “life-enhancing” qualities had the potential to be a marketing goldmine–a fact the two continue to celebrate with such inspirational juice-pack text as, “Brazil is a passionate place. And Vita Coco is pure passion fuel. . . . Vita Coco gives you the fuel you need to compete, to love, to do whatever it is you do. With passion.”

As for those frigid customers who have no need for passion but enjoy the occasional giggle now and again, there is Vita Man, an 8-foot-tall inflatable Vita Coco box with legs, arms and, occasionally, played with sweaty fervor by Mr. Liran’s 15-year-old brother, Orin. Vita Man is on his way to California towns of youth and colleges, where Kirban and Liran hope that coconut water’s reputation as a hangover cure, among other qualities, will earn it some loyal customers.

“I can tell you from personal experience,” Liran says of Vita Coco’s hangover-helping properties, “that’s definitely a valid claim.”

At the end of the day, though, Vita Coco’s most enduring success might be one that is not yet splashed across the bottle: the birth in August of Liran’s first son with a certain Jewish-Brazilian blond.