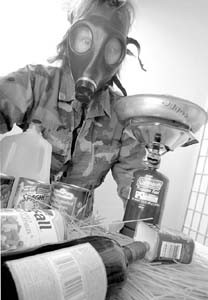 How I survived the apocalypse

WELL, it’s the first day of Y2K, and they were right. Those missing two digits were enough to bring civilization to a screeching halt, or at least shut down the electrical supply, which is essentially the same thing, as far as the United States is concerned.

Fortunately, I’m a prudent sort of person when it comes to emergency preparedness. I always bought more than one can of tomatoes at a time and stacked jugs of water in the garage. After all, I live in earthquake country, riot country–they call it California on the map–and I’ve learned to be ready for any weirdness, natural or man-made. I may not have stocked up on freeze-dried Army rations or learned how to divert my gutters for a water supply, but I think I’ll be OK. After all, I am a food writer, and I know my way around a kitchen. Even in the dark.

The best thing to do at this point is to stick with what I know. What’s to worry? Much of the food we eat on a regular basis already has the staying power of a Twinkie. And I’m not going to get scurvy just because I can’t get fresh oranges until next Monday. I’m way ahead of, say, the typical Leningrad resident during World War II, who had only 250 grams of sawdust-and-maggot bread a day during the 900-day blockade by the German army. Talk about food-delivery interruptions.

IT’S BEEN a couple of days now, all the champagne is gone, but all I can say is: finally, an excuse to clean the freezer! I’ve set up my camp stove on the patio and have been cooking nothing but that Depression-era favorite: freezer stew! The recipe is simple: one can of tomatoes (I knew they’d come in handy), one can of broth, one can of water, and one bag of frozen vegetables, doesn’t matter what. That freezer-burn flavor just vanishes with a healthy spoonful of garlic powder or onion flakes–the survivalist’s friend!

WALKED DOWN to the grocery store today to see if it was open yet, but I couldn’t find it amid the smoking ruins. Oh, well. The walk was good for me. Got back and spent the last few hours of daylight flipping through my cookbook collection. Lingered over the Y2K cookbooks and survival guides, which I originally picked up for their historical significance. I still can’t say I’m sorry that I didn’t follow their guidelines.

I just don’t have the taste for unbleached, unground, soaked-and-boiled wheat, no matter how much it’s dressed up with honey, powdered milk, or peanut butter.

Don’t know whether to laugh or burn the books for heat. Wake up, people! The average American has never even seen a whole kernel of wheat. We like our grain ground and our cereal from a box with a cartoon character on it, and there’s not enough time in even this new millennium to change that.

THOUGHT I was pretty smart, snagging those 100 pounds of spaghetti at BulkMart a few days before New Year’s. But I forgot the sauce, the salad mix has gone bad, and my stash of red wine is almost out (anarchy is hell on a wine cellar). Time to turn to the corners of the kitchen, to the foodstuffs that everyone accumulates but no one knows what do to with: condiment packets, jars of chutney, half-empty bottles of gourmet ketchup. Here lie the makings of an ethnic smorgasbord! Spaghetti with olive oil, chili flakes, and a squirt of ketchup: spaghetti indiavolati (“deviled spaghetti”). Spaghetti with sesame oil and soy sauce: instant chow mein. Spaghetti with Parmesan and bits of anchovy, fried into a thick pancake: spaghetti frittata.

Too bad about the wine, though. I seem to be going through it a lot faster these days. . . .

STARTING TO GO through Internet withdrawal. I’ve had to rely on my trained pigeons to communicate with long-distance friends and relatives. It’s easier on my wrists, but it lacks a certain sense of immediacy.

Meanwhile, I am exploring the possibilities of canned food. Nutritionists have bemoaned Americans’ overreliance on canned food products for decades, but when push comes to shove, canned foods will save our bacon. Most food is edible straight out of the can. And the camp stove makes a canned meal positively luxurious: hot soup, a pasta course of Spaghetti-Os, fried Spam with the last eggs.

Of course, I’m running the risk of MSG poisoning, but the stack of water in the garage should help with that. I like to round it off with a dessert of canned-fruit ambrosia: old coconut, marshmallows, and fruit cocktail with that special metallic tang.

HAVEN’T HEARD from Mom since I sent the pigeon a week ago. Either she’s taking a long time on the reply or she ate the pigeon. Oh, well. I’m rejoicing that at least I got acquainted with some of my manual kitchen equipment before the power went out. Whatever plugs into the wall is now dead plastic. No blender, no microwave, no toaster oven. Anyway, in the long run manual items are much more versatile. Makes me wonder why we ever gave them up.

A knife, for example, is completely Y2K-compliant. I find the eight-inch chef’s knife to be perfect for most kitchen situations, and when gripped in a fist above your head, it carries just the right edge of confident psychosis to ward off all but the most persistent of looters.