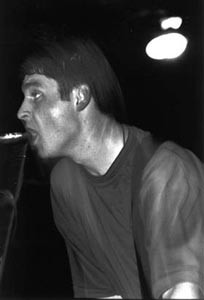 Fans of the Phoenix ponder the future

IT MAY HAVE been the most unusual crowd ever to grace the stage at the Phoenix Theatre. At a hastily called news conference on Dec. 8, well-coifed TV reporters mingled quietly with concerned Petaluma City Council members, besuited business leaders, and roving photographers hauling cameras that would put the cost of most metal bands’ sound equipment to shame.

They were all on the edge of their seats, waiting to meet the mystery investors who stepped in at the last minute to save the all-ages Petaluma alternative-music venue from being turned into an office building at the hands of a Sebastopol developer.

The angels of musical mercy turned out to be a group of unassuming local telecom engineers who made serious bank from the stock market last year when their employer, Cerent Corp., was bought out by Cisco Systems. The four pooled their newfound money to buy the Phoenix from the developer who had it in escrow. Two of the investors–Paul Elliott and Keith Neuendorff–decided to drop their cloak of anonymity last week after the new deal was signed.

But naming names was only half the point of the news conference that brought the pack of news hounds to the Phoenix.

There was another big question confronting both the suits on the stage and the crowd of kids hanging out in front of the theater. Now that the Phoenix is in the hands of those who love the place (Elliott, after all, used to play bass on the stage with his band the Creetones), what happens next?

“We’ve preserved the building for the time being, which allows us some breathing space to figure out what the next steps are,” said Elliott, now a systems architect at Cisco. “I think that will require community involvement. . . . It’s become very apparent that there’s a lot of support, but it’s going to take a while to get this done.”

The building, built in 1904 as an opera house, has served as a mosh pit and teen hangout for the past 15 years under the management of Tom Gaffey, who will stay at the helm under the new owners. It’s been the first gig for many local bands, and some heavy-duty stars of the music scene, including Primus and Green Day, made their name playing the Phoenix.

But many, including Gaffey, believe the building must become more accessible to other segments of the population by, for instance, providing a place for local theater groups to perform.

Moreover, the aging building could use some serious renovation, and the law requires an expensive seismic retrofit that must be completed by 2002. Hours before the deal was signed, the potential buyers received a dauntingly high estimate of the cost to make the building earthquake safe.

“It wasn’t orders of magnitude beyond what we were expecting, but it was definitely on the high side,” Elliott said.

The money for that task will come primarily from the community. The effort to pull together the good will and big bucks to get the work done will apparently be spearheaded by business consultant John Sheehy, a man Tom Gaffey calls the “continuity coordinator” of the organizing attempt.

“I hope that no one goes away thinking ‘This is it, the Phoenix is saved,’ ” Sheehy told the crowd. “This is just the beginning.”

Attempting to raise the retrofit sum (which approaches $800,000) may not be as difficult as it would have been a few years ago. The recent tussle over the theater’s fate has demonstrated that the Phoenix has acquired a surprising new level of support among local politicians and even the once-hostile business community. Among the signs: the Save-the-Phoenix buyout effort received legal help from attorney Thom Knudson, president of the Petaluma Chamber of Commerce.

Whatever challenges may lie in the theater’s future, the feeling of relief among Sonoma County teens was palpable. Leslie Crebassa, one of the few kids to brave the stage during the news conference, didn’t try to hide her joy.

“I really want to say thank you,” Crebassa, 14, exclaimed to the new buyers. “We all wanted to save it, but none of us had the money.”

For more information about the Phoenix Theatre organizing committee, call John Sheehy at 664-9993.